Mentors prove their mettle—tradition and innovation in the terno | Lifestyle.INQ ❮ ❯ 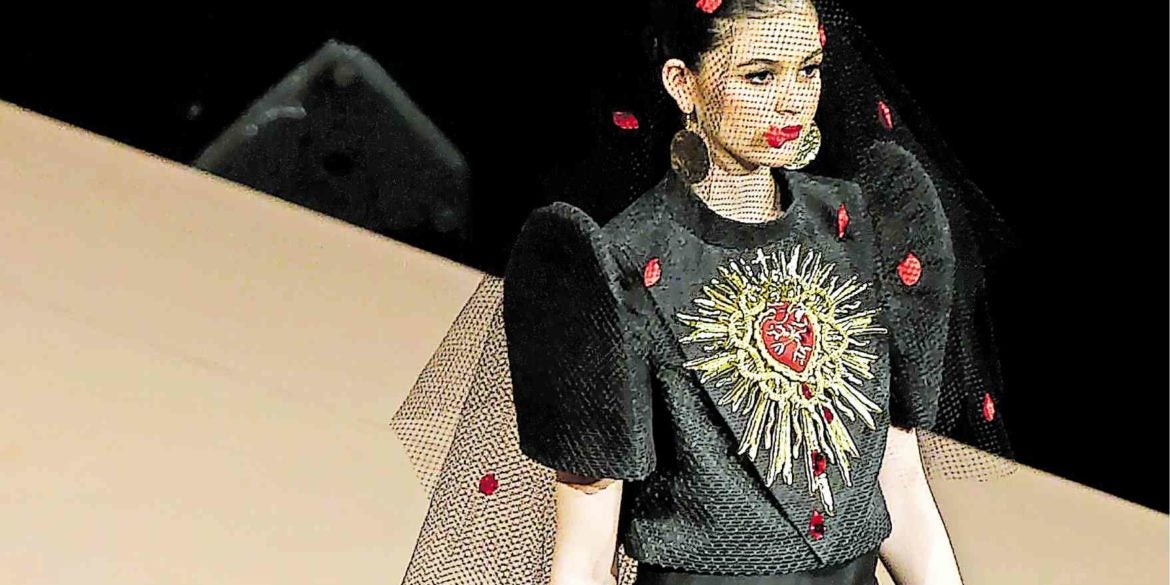 Mentors prove their mettle—tradition and innovation in the terno

The 1910 photograph of four women in printed Filipiniana dresses standing in the Cebu harbor, pillowcases on their heads, grabbed the attention of designer Lesley Mobo. He wondered if they were fleeing a conflict.

Gino Gonzales, artistic director of TernoCon, a workshop and fashion competition on the national dress, explained to Mobo that the women were, in fact, hawking pillows.

The photograph was in the book, “Fashionable Filipinas: An Evolution of the National Dress in Photographs: 1860-1960.”

Authored by Mark Higgins and Gonzales, it educated the reader on changing styles and clothing terms before the dress became known as the terno. The book was published by Bench, the clothing brand whose advocacy is to promote Filipino culture.

To bring the book’s research to life, TernoCon became the spin-off and joint project of Bench and the Cultural Center of the Philippines.

“For a Filipino garment that holds so much tradition, it is saddening to see the terno struggle for survival through the years. There is an entire generation of young designers who don’t know what a terno should look like. This is the reason to embark on a journey, through the Ternocon, to make the terno relevant to contemporary times.”

Budding designers from Manila and the provinces assembled at CCP for an intensive course on the history and construction of the terno given by veteran designers.

Mobo was a mentor, with Ivarluski Aseron, Philip Rodriguez and Inno Sotto.

Mobo, Aseron and Rodriguez themselves presented a 10-piece collection each in TernoCon 2020.

To Mobo, the women he mistook for refugees on flight in the old photograph served as metaphor for the Filipino fleeing the colonizers, the OFWs escaping hardships in the country, or people displaced by war and calamities.

His entire collection, all made in London, was based on the national dress, as it looked in the 1910s—the terno’s precursor, the baro’t saya, which consisted of the camisa (blouse with big puffed sleeves), the panuelo (shawl), tapis (short overskirt) and its alternate, the sobrefalda (longer, embellished tulle skirt), and the saya with cola (skirt with train).

He dramatized the historical references with flamboyance, glamorizing the unglamorous.

Like in the neutral tones of the photograph, Mobo combined black, white and taupe, with gold and blue accents. He layered the baro’t saya with synthetic fabrics such as organza, expensive silks and lamé, and mixed textures such as tulle, lace, mesh and pinukpok (a blend of abaca and piña).

Mobo exaggerated the panuelo and played with folds and added bustles to some gowns. As in the overskirts of the 1910s, the tapis and sobrefaldas were made of tulle, embellished with embroidery and beads.

Mobo’s scapulars with amulet details were hand-embroidered at Fitzrovia, London by Hand &amp; Lock, an embroidery house that produces monograms for British royalty and embellishments for gowns designed for the Queen by the likes of Hardy Amies, Norman Hartnell and Dior.

Rodriguez harked back to the Christianization of Cebu in 1521. His embellishments were references to ecclesiastical clothing, the metallic embroidery and crowns of religious icons. Aside from accessorizing with scapular necklaces, he made headdresses out of rostrillos, hammered silver halos that framed the faces of icons, and rayos (metallic rays on the icons’ crowns).

The Cebuano designer wanted to present local craftsmanship in religious art. The embroidered symbols on the chests were designed by painter Rafael del Casal and interpreted by Bordados de Manila, specialists in making vestments.

In one sage skirt symbolizing the patina of church walls, the embroidery of angels and baroque patterns found in old Cebu churches was done in Minglanilla. The town is known for the yugyug. “It means a crude way of doing machine embroidery which is unique to them,” he explained.

Rodriguez also expressed his trademark romantic style through his terno opera coat and the classic multitiered, tulle terno and use of luxurious silks. He played up tulip skirts, low backs, necklines.

The bridal headress employed the langang, a Cebuano craft of making shells into flowers.

“The nautilus shell is cut into leaves and petals, made into flowers and used to decorate religious icons,” he said.

He also worked with Earl Gariando, who does hammered metal smithing, for the purses and rayos for a headress. The other headpieces and vintage colonial jewelry were by Natalya Lagdameo and a metal scapular of the Holy Cross was by Ann Ong.

The ternos of Aseron and 2018 TernoCon winner Tuazon looked into Philippine culture.

Aseron developed his concept based on the word “himlay&quot; (repose), which is associated with the banig, the woven mat used for sleeping.

“It’s a lot of fabric manipulation. I combined different textures of fabric strips. The banig (woven base) takes long to make, but weaving into the actual garment takes longer,” said Aseron.

Each of the 10-piece collection differed in silhouette and texture, but they were unified by nude and pink fabrics, some of which were combined with woven black strips treated in different ways.

In one terno, the sheer strips intertwined into the weaves represented the kulambo (mosquito net).

The clothes varied in looks—a sheer terno coat with wide-legged pants, a terno waistcoat over a patterned pantsuit, a body-skimming seamless terno and a maria clara with a pañuelo draped over the terno sleeves and worn over a frayed skirt.

For quirky humor, he showed the reverse side of the butterfly sleeves by exposing their armholes.

Before TernoCon, Tuazon was known for bridal wear. Since he won the grand prize in 2018, his calendar has been full of fittings for the terno.

His black-and-white terno collection was a homage to the LVN movies of mid-20th century. With actress Gloria Romero as muse, he produced silk gazar ternos that projected old school elegance. He presented his balintawak (short terno) with signature double balloon skirts. To give them body, he layered the skirts with stiff tulle, structured crinoline, mesh and lace tulle for volume and bounce.

Appealing to the millennials, he integrated the terno sleeves in the panuelo (folded triangular fabrics). “They are detachable so that the clothes become versatile,” he said.