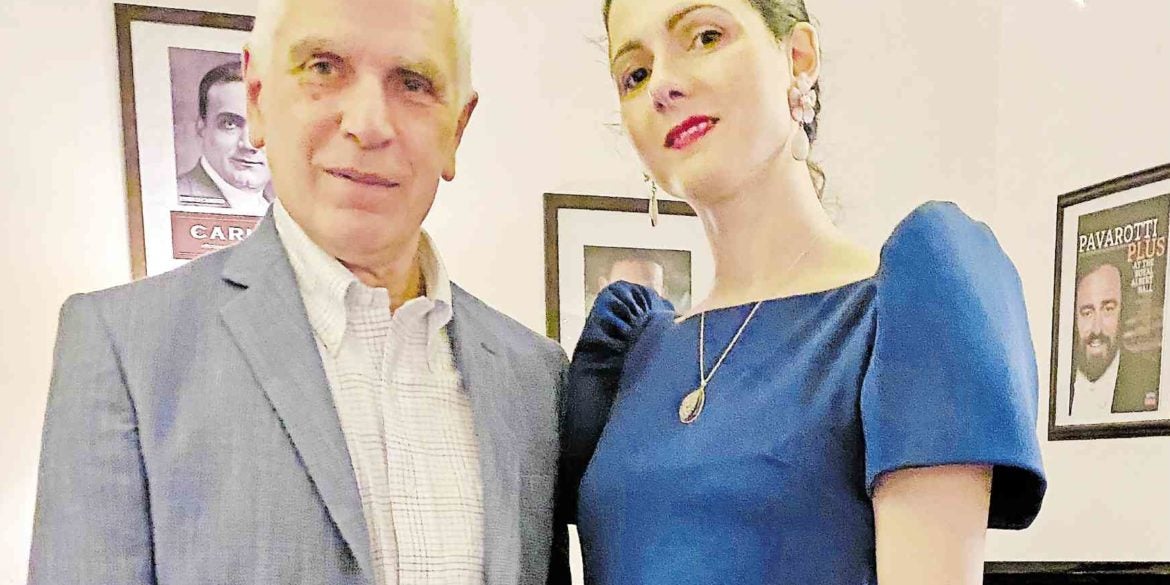 “Lucia di Lammermoor,” a tragic opera about forsaken love, returns to the Philippines this weekend at the Cultural Center of the Philippines, 70 years after its local premiere.

Italian restaurateur and music lover Emilio Mina, owner of Caruso restaurant, has been hosting guest artists and singers. He recently feted the cast and production team of “Lucia” and art patroness Zenaida Tantoco, president of the Philippine-Italian Association and chair and CEO of SSI Group and Rustan’s Corp., the major sponsors.

It is also a coproduction with the Philippine Opera Society Foundation.

After a multicourse meal paired with wines, Mina serenaded the guests with “O Sole Mio” and arias popularized by Enrico Caruso and Lucio Dallas.

The Cambodian royal is nephew of the late King Norodom Sihanouk. His grandfather, Prince Norodom Monissara, a diplomat, established the first Embassy of Cambodia in the Philippines in 1963.

Sisowath has been working with Grisostomi-Travaglini for over 10 years. They directed “L’Elisir d’Amore” at CCP in 2017 with famous Italian soprano Elena Monti as guest artist.

The prince lauded Tantoco’s efforts in supporting Italian operas through the years. “The Philippines is a fine example among the Asian countries,” he said.

Sisowath has also been instrumental in the renaissance of the arts in Cambodia, with the establishment of the Ballet Classique Khmer and the production of two operas in the capital, Phnom Penh, under the Cambodia Opera Project and the Japanese Embassy.

Inquirer had a brief chat with some of the guests. Armenian-French soprano Melody Louledjian will make her debut in the title role. Italian conductor Alessandro Palumbo had worked with her in the production of “La Traviata” in the Canary Islands.

Impressed with her talent, he asked her to consider playing Lucia in a future project. Palumbo will conduct the Philippine Philharmonic Orchestra in this production.

Louledjian explained that the lead role is tough. The story is about Lucia, who loves Edgardo (tenor Arthur Espiritu), but her brother Enrico (baritone Byeong-in Park) marries her off to a nobleman to pay his debts.

Enrico fakes a letter stating that Edgardo found another lover. On her wedding night, she loses her sanity.

Louledjian said one of the challenges is the extended mad scene. The soprano has to pull out all the stops yet maintain dynamics. She admires Espiritu’s technique and sincere acting. She got along with Park in developing the tension between their characters.

Dressed in midnight blue terno top, Louledjian raved about its style and comfort. “I love the butterfly sleeves and the material is pure. It is very feminine. I will bring it back to France and wear it many times. I will explain that it is Philippine haute couture,” she said.

The soprano hasn’t had time for sightseeing except to shop at Ayala Center. She bought “Philippine haute couture” at Rustan’s.

She also has a big bowl of tropical fruits like mangoes, little bananas and pineapple—every morning. The soprano enjoyed Filipino food and enjoyed puto bumbong. “I liked the rice cakes on banana leaves with brown sugar and coconut.”

Park is doing “Lucia di Lamermoor” for the first time. The Stuttgart-trained baritone said his favorite role to date has been Eugene Onegin.

Grisostomi-Travaglini lauded the natural chemistry between Louledjian and Espiritu and the enthusiasm of the young chorus. His vision is to convey the timelessness and universality of Italian opera.

“Familiarize yourself with the opera by watching on YouTube before going to the theater. Once you’re there, you can read the program notes and the subtitles (the dialogue projected above the stage). People know the story already. You appreciate the opera for the quality of production.”