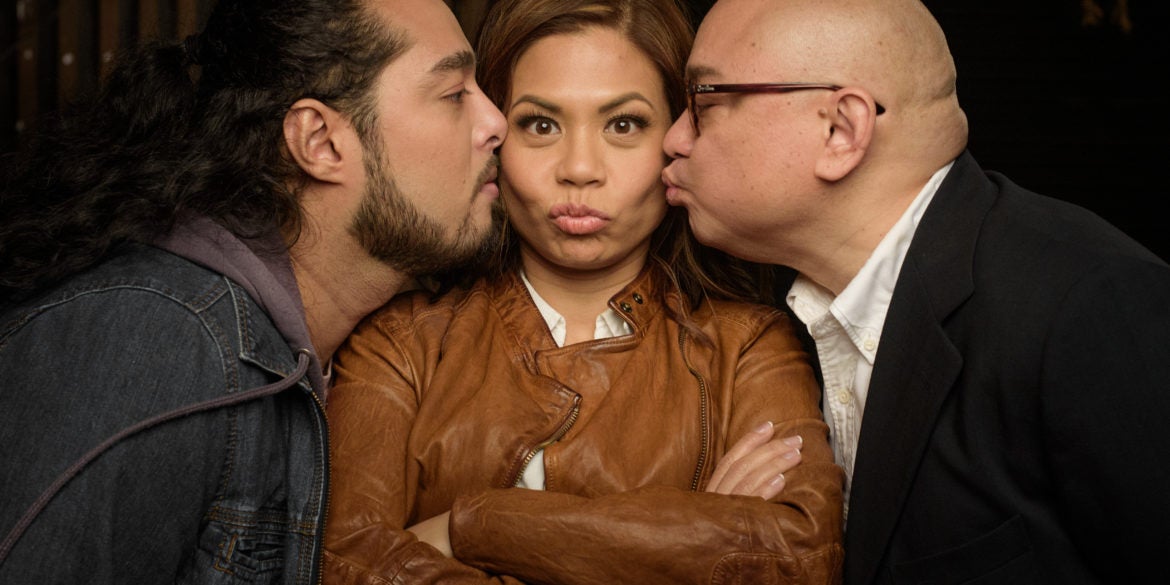 ‘As if time had stopped’—the first kiss

Cast and crew of Rep’s ‘Stage Kiss’ recall the moment

Next week, Rep returns to Ruhl with its 83rd season opener: “Stage Kiss,” a backstage farce in which two ex-lovers suddenly find themselves playing the romantic leads of the play within the play. Carlitos Siguion-Reyna directs, with Missy Maramara (Best Director of Inquirer Lifestyle’s 2019 theater roundup) and Tarek El Tayech (Theatre Titas’ “Macbeth,” “BuyBust”) as ex-lovers.

Ahead of the Feb. 7 opening night—and just in time to usher in Valentine’s season—we asked the cast and crew of “Stage Kiss” to tell us all about their first kisses, either onstage or in real life.

Here are excerpts from our email exchanges:

My mom always said that when I was in preschool, I kissed this cute boy in my class. So I grew up thinking my first kiss was gone. The first kiss that mattered, though, was right after high school, with a boy from another school who was very good in math. He watched all my plays even if he wasn’t into theater. I really liked him, even if I was also terribly infatuated with my scene partner in our school play. (Said partner was also super cute, and most everyone had a huge crush on him, too).

Onstage, it was with Jenny Jamora in New Voice Company’s “Stop Kiss” in 2003. That was when I learned how stage kissing is such a delicate component of theater—and nothing like real kissing. Onstage kissing should let the audience be the ones to “feel,” and the actors have to be careful not to get lost in the act. It involves a different kind of discipline and trusting relationship.—Missy Maramara, “She”

I have a theory that my kisses make people famous. I had to kiss JC Santos and JM de Guzman in “Isang Panaginip na Fili,” and today they’re both movie stars. Who wants to be my next leading man?—Mica Pineda, “Laurie”/ “Millicent”

I was around 10. My older sister’s classmate would always grab me every time she saw me, and kiss me on the lips. All I remember is liking it. My first onstage kiss: in a production of “Much Ado About Nothing” eons ago, where I played Claudio! Me as a romantic lead. Awkward. —Robbie Guevara, “The Husband”

I’ve played romantic roles, the third party and even an abusive man, but I’ve had only three onstage kisses, all very chaste, and all in Shakespeare: with Shiela Valderrama-Martinez and Issa Litton in “A Midsummer Night’s Dream,” and Niccolo Manahan in the all-male “The Taming of the Shrew.” I wonder when I will be cast in a role that will allow me to go to town. Any takers? —PJ Rebullida, choreographer

It was an innocent peck; I was playing doctor with this girl. It was before puberty hit. —Tarek El Tayech, “He”

I had a make-out scene in “Burles” (Dulaang Unibersidad ng Pilipinas, 1978, written by Rene Villanueva, directed by Jonas Sebastian) where I had to kiss the cheeks and neck of my scene partner. During the first weekend run, she asked me why I wasn’t really kissing her and, instead, was just pretending to do so by brushing my lips against her skin. I had thought that the 15-year-old me was trying not to take advantage of her. After that, my kisses during the second weekend became more realistic.—Dennis Marasigan, lighting designer

It was early in high school. She was an exchange student, with surfer blonde hair and a great smile. We kissed in the field at school after class, with the sun getting lower on the horizon. We were walking hand in hand, and I sensed that we could both feel the moment approaching. We stopped walking and faced each other, and then something changed in her eyes, as I am sure something in mine did. It did seem as if time had stopped, and the rest of the world—the noise of children playing, a football game in progress, even the rustling of the leaves—had faded away.

That magical first kiss had everything in it: awkwardness, excitement, expectations, fear and nervousness, and the feeling that even if we both knew she was leaving, maybe this could somehow be a reprieve. When we had parted, and opened our eyes, and finally caught our breaths, we smiled.

She was perfect in the afternoon sun. And then the smiles disappeared, and our eyes closed as we leaned in to kiss again, and in my eagerness, I bumped her teeth. We laughed, then stepped closer to try again. —Jamie Wilson, “The Director”

My family and I moved to Ho Chi Minh City when I was in middle school, and that was peak teen—“truth or dare” and “spin the bottle” parties galore. Long story short, I was dared to kiss some dude, when I really wanted to kiss my crush, who was right next to him. My best friend ended up kissing my crush instead, so you can only imagine how a 14-year-old would react!—Justine Narciso, “Angela”/“The Maid”

None—or shall I say, none yet? But either in real life or onstage, it will probably be full of sweetness and excitement, knowing how warm and soft, or how cold and hard, the other must be. Shall I keep my eyes closed? How do I even prepare for that? Perhaps I am scared of the intimacy that will certainly go beyond a mere peck on the cheek or a gentle touch on the forehead, but just the thought of a little kiss is thrilling.—Nick Nañgit, pianist

I was crushing on this girl from a baseball movie that I watched growing up. I was so infatuated with her that one day, with no one around, I walked up to the TV, pressed the pause button, and gave her a big kiss on the screen. —Andres Borromeo, “Kevin”/“The Understudy” —CONTRIBUTED