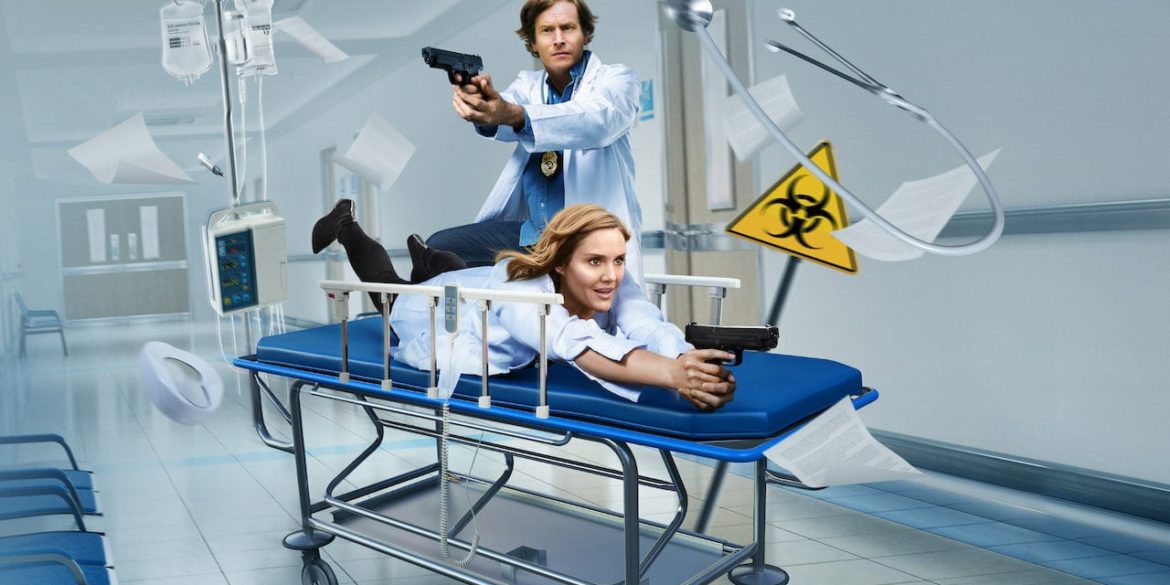 Rob Huebel and Lola Spratt hilariously track down a virus.

Fans of David Wain and co.’s zany brand of absurdity, from films like “Wet Hot American Summer,” “The Ten” and “They Came Together” to shows like the two “Wet Hot” prequel/sequel seasons and “Childrens Hospital” should feel right at home with Netflix’s new series “Medical Police,” (MP) itself a spin-off of “Childrens Hospital.”You don’t need to have seen the prior show to appreciate MP, though. Everything you need is laid out for you in the first (of 10) episodes, as doctors Lola Spratt (Erinn Hayes) and Owen Maestro (Rob Huebel) get roped into hunting the origins of a deadly virus that breaks out in different cities around the world simultaneously. See, Maestro used to be a cop and Spratt used to specialize in virology in medical school… but you don’t really need a whole lot of logic to appreciate the plot of MP. Much of the time it’s that lack of logic that fuels the humor. In fact, the plot really just exists as a vessel for jokes.

The show has its fun in setting up and then exposing many of the tried and true tropes of the shows it lampoons, which run the gamut from medical shows, cop shows, antiterrorism thrillers like “24,” and so on. In one scene, trapped on a balcony with the authorities about to discover them, the medical police duo spot a convenient truck with a comfy mattress on its open-air bed right below them. They count down, look at each other, nod, and jump, then miss the (very near, very large) mattress completely and hitting the truck in all sorts of painful ways. An assassin sent to terminate them gets burned on her face with a bathroom sign that permanently affixes “Lavator” to her face, and so she is called Lavator.

The conceit of the plot allows the duo to gallivant and traipse to exotic locations like Bhutan, Sao Paulo, Shanghai, even if they’re mostly establishing shots before reverting to the likely sets of North America. The travel also allows for numerous cameos from the likes of Joel McHale, Randall Park, Craig Robinson, Jason Schwartzman, Lake Bell and Jon Hamm.MP is a hoot, and is a great proof of concept for further seasons, or even other spin-offs with different permutations of the other “Childrens” characters.