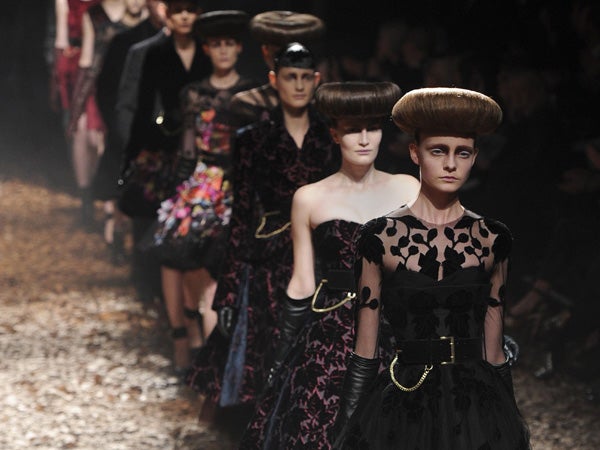 LONDON – Alexander McQueen launched the autumn/winter range for its McQ label in London on Monday, flaunting military-inspired twists on British design classics as a fairytale cottage pumped out techno beats.

US Vogue editor Anna Wintour and Hollywood actress Salma Hayek were in the front row to see the diffusion line’s first ever catwalk show, one of the most hotly anticipated events of London Fashion Week, which closes Wednesday.

Chunky leather belts toughened up feminine, A-line dresses in tulle and brocade for the women.

Autumn leaves drifted under the spotlight onto a lone model in white tulle, who bent down to pick up a rope lying amid the wood chippings covering the catwalk.

As she followed the cord, the back wall of the minimalist venue rose to reveal a floodlit woodland scene featuring real trees and an ancient-looking cottage – which proceeded to pulsate with strobe lighting and a throbbing beat.

For the men, their hair slicked neatly into 1940s-style side partings, there were tweed trenches and bomber jackets, khaki army jumpers and leather ties.

A few gold chains glinted from their hips, but in a manner more suggestive of a dangling gentleman’s pocket watch than of grunge rock.

Apart from a sequence of black dresses covered in multi-coloured flowers, the palette stayed muted, ranging from camouflage tones of brown and khaki to crimson and black brocade and forest greens.

There were also a few flashes of Black Watch regimental tartan, including a kilt teamed with a military jacket and a pleated sleeveless dress underlaid with lace.

The glitzy showmanship could not have contrasted more with McQueen’s understated creative director Sarah Burton, who shuffled onto the catwalk in jeans at the end to give a sheepish wave.

McQ, which was launched in 2006, opens its flagship store in London this spring. The main line Alexander McQueen collection will continue to show at Paris Fashion Week.