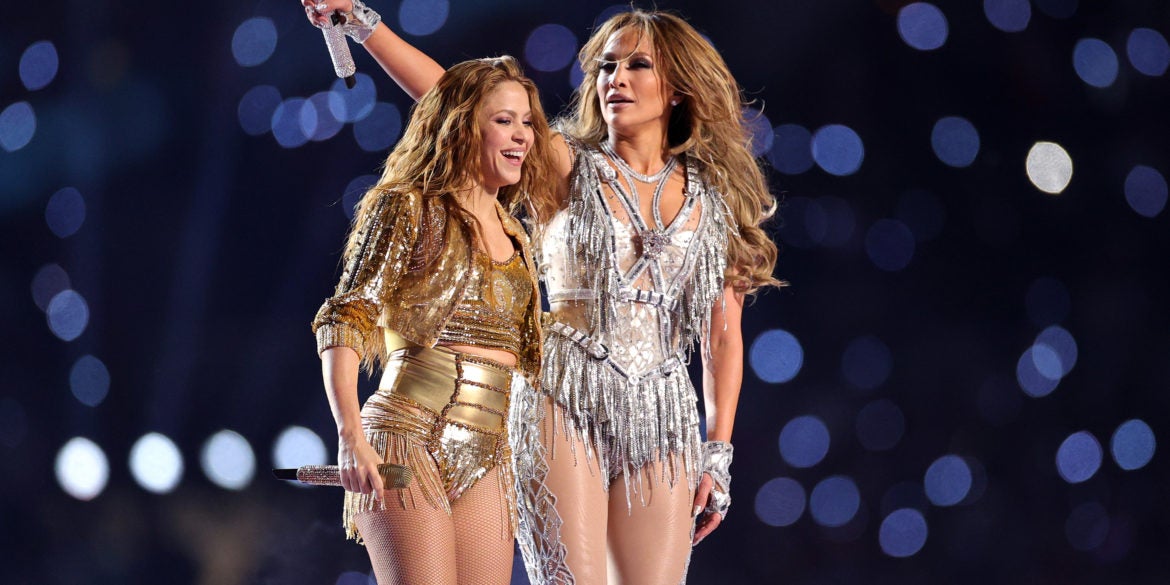 The performance, at Miami’s Hard Rock Stadium, was a high-energy celebration of culture and abs, as both women showcased soaring vocals and thunderous dance routines.

Shakira opened in a glittering ensemble, getting the crowd of 65,000 on their feet with “She Wolf” and “Wherever, Whenever”.

She was then joined by Puerto Rican reggaeton singer Bad Bunny for a few lines of “I Like It” (originally sung by rap star Cardi B) before segueing into her iconic hit, “Hips Don’t Lie”.

The stage then cleared as Jennifer Lopez appeared atop a miniature Empire State Building, a nod to her New York roots, much like King Kong — or Queen Kong, as it were.

After a few bars of “Jenny From the Block,” Jenny herself took the crowd through a medley of “Love Don’t Cost A Thing”, “Get Right” and “On the Floor”, her transitions as fast and sharp as her dance moves.

But she soon shed that for a revealing silver number as she performed a pole dance to “Waiting For Tonight”, alongside Colombian reggaeton star J Balvin.

The dance was in honor of her acclaimed performance as Ramona in “Hustlers,” a film Lopez also produced.

She earned a Golden Globe nomination for the role — and many thought she should have won an Oscar nod.

Her daughter Emme then took the stage for the show’s most political moment: small children in light-up “cages” surrounded the stage, a pointed reference to a President Donald Trump administration “zero tolerance” policy launched in 2018 that saw thousands of children separated from their parents at the border.

Lopez then returned wearing an American flag feather cape — that she then lifted to reveal the flag of Puerto Rico, the US territory struggling in the aftermath of earthquakes and a devastating hurricane.

Y'all I had this CASETTE TAPE as a kid and watching Shakira and JLo just exude #latinapower on that #PepsiHalftime meant a whole lot to me. If you didn't feel that infectious joy and energy/get slightly turned on- you need as we say, ayuda. 😂 That was a good ass show. 🔥🍑💃 pic.twitter.com/Phz1mxyLZC

Backed up by Shakira on the drums, the mother and daughter sang a few lines of Bruce Springsteen’s “Born In the USA” before transitioning into “Let’s Get Loud”.

Shakira, now in a fringed gold outfit, took center stage once more for “Waka Waka”, the song she wrote for the 2010 football World Cup.

The song quickly turned into a full-on Latin dance number, with Shakira and Lopez showcasing fierce, high-intensity footwork on a raised platform and ending the show back-to-back in a “Charlie’s Angels”-esque pose.

. @JLo and @shakira and all the special guests were so incredible!!! What a fun halftime show I danced and smiled the whole time. Such powerful sexy women!!!! On camera and off!!!!! Love you beautiful sexy talented women 💕💋 #SuperBowlHalftimeShow #SuperBowl

Twitter lit up after the performance, with many praising the women’s skills. The hashtags #Latinas and #Latinapower also began trending.

Lady Gaga, who performed at the Super Bowl halftime in 2017, called the performance “so incredible!!!”

“I danced and smiled the whole time,” the singer tweeted. “Such powerful sexy women!!!!”