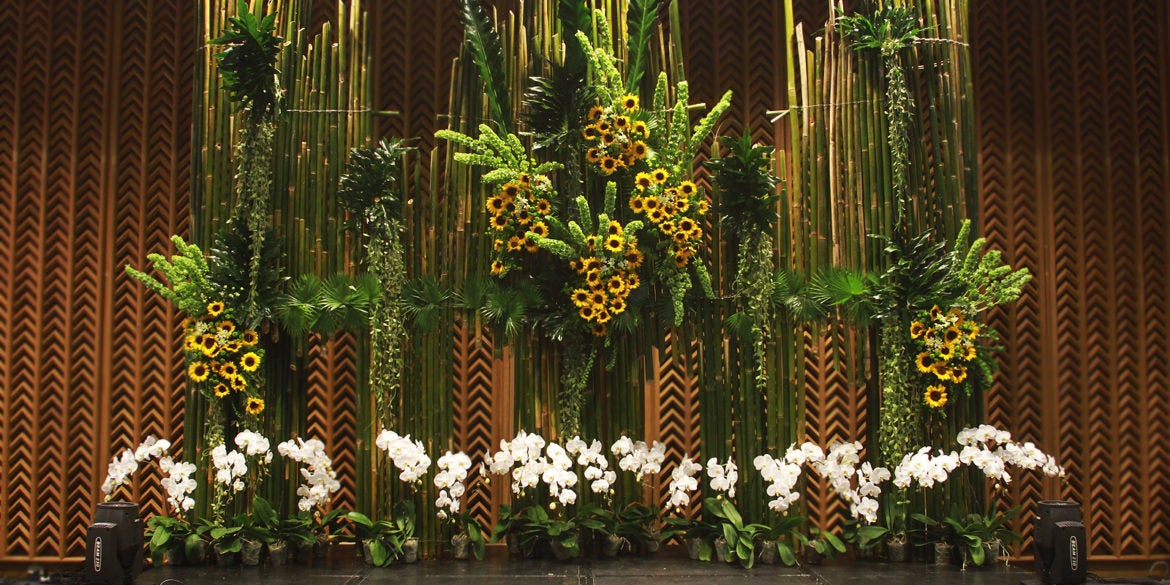 The rhythmic arrangement of bamboo, decked with contrasting textures of sunflowers, bells of Ireland and selloum leaves, made an understated organic stage backdrop. For visual balance, New York-based events and floral designer and producer Jerry Sibal installed hanging plants and made a hedge of white phalaenopsis.

“I love organic materials. The bamboo symbolizes strength while the sunflowers bring hope. I like my arrangements to be spiritual,” he said.

Sibal is known for his floral installations that use fancy props and technology.

The wheel of life was a metal frame, woven with grass. Its hub was encircled with a profusion of bold colors—orange mokara mums, fire orchids and magenta phalaenopsis, bordered with clusters of the national leaf, the anahaw or palm leaf.

The floral vignettes were merely samplers of what to expect in the country’s first-ever international floral show, to be held Oct. 15-18 at the PICC.

Visitors can immerse themselves in the major installations by landscape designers and floral designers from all over the country. The event will also include seminars on horticulture, floral arrangement demonstrations and vendors.

“We want to give them a voice and showcase the best from the regions, such as the everlasting and snapdragons from Baguio, the vandas from Davao, the bromeliads from Quezon,” said Sibal.

The Philifs is a partnership between the PICC and Sibal’s company, JNS Productions, with Edwin Josue as president.

Sibal, who is Philifs’ creative director, said that people not only want to get new ideas in floral design but they also want to be enthralled by the exhibits.

“Our aim for the Philifs is to share our knowledge. It will be our advocacy as this will become an annual event,” he said.

In 2009, he authored “An Event to Remember: Designing Spectacular Special Occasions,” which was a compilation of his dramatic works. The cover was a sweeping arrangement of purple phalaenopsis playing against a white dining table with Lucite (acrylic) chairs.

Sibal described his style as “architectural,” imbued with restrained elegance. He favors the phalaenopsis or the moth orchid for its sculptural petals and graceful arching bloom. “It speaks to me,” he said.

The cover set the trend for other floral designers to use the phalaenopsis.

On his design philosophy, Sibal explained, “You work with a blank canvas and learn the client’s objectives. My design is based on their concepts. You turn the space into a spectacle. It’s got to have that wow factor.” He added that his background in architecture and theater have influenced his designs with the use of innovative backdrops, absence of clutter and dramatic lighting.

Sibal had also set trends aside from the phalaenopsis craze. He popularized floral displays in LED-lit Lucite tables and creating an ambiance with mood lighting, according to the visual narrative.

In the past decade, Sibal has been attending international flower shows, styling destination weddings, designing VIP events and visiting the Philippines to visit floral farms and hold workshops.

Last year, Sibal was invited by the Tourism Promotion Board to give a lecture on events design and special events at the MICE (meetings, incentives, conference, exhibition) Convention at the SMX Convention Center in Bacolod. Representatives from PICC were inspired and approached him to put up an event to draw the public to PICC, the iconic building designed by National Artist Leandro Locsin.

Sibal noted that the Philippines must catch up with Thailand, Hong Kong and Singapore, which have been organizing flower shows that draw tourists.

He did the rounds of the floral farms around the country and was impressed with the resplendence of export-quality mums from Bukidnon and Cagayan de Oro, some of which are delivered to the Emperor of Japan. He hopes that the Philifs will encourage more growers and hobbyists and make the government realize the horticulture industry’s economic potential.

Likewise in 2019, Sibal conducted a master class at the Dusit Thani Makati hotel. He transformed the ballroom into a garden filled with tulips, phalaenopsis and vandas and lavish table settings.

Impressed by the setting, priests from the Franciscan Development Office requested Sibal to become a partner in their endeavor. Its business of religious items at the San Antonio Plaza was not prospering. The priests needed to produce revenues for its mission and education.

Sibal, Josue and Franciscan priests turned the space into the [email protected]: Jerry Sibal NYC flower shop. It has since been selling floral bouquets and styling events. Part of the earnings go to the Franciscans’ missions while the rest is channeled to store operations. “With all our advocacies, we’ll surely go to heaven,” said Sibal.—CONTRIBUTED INQ