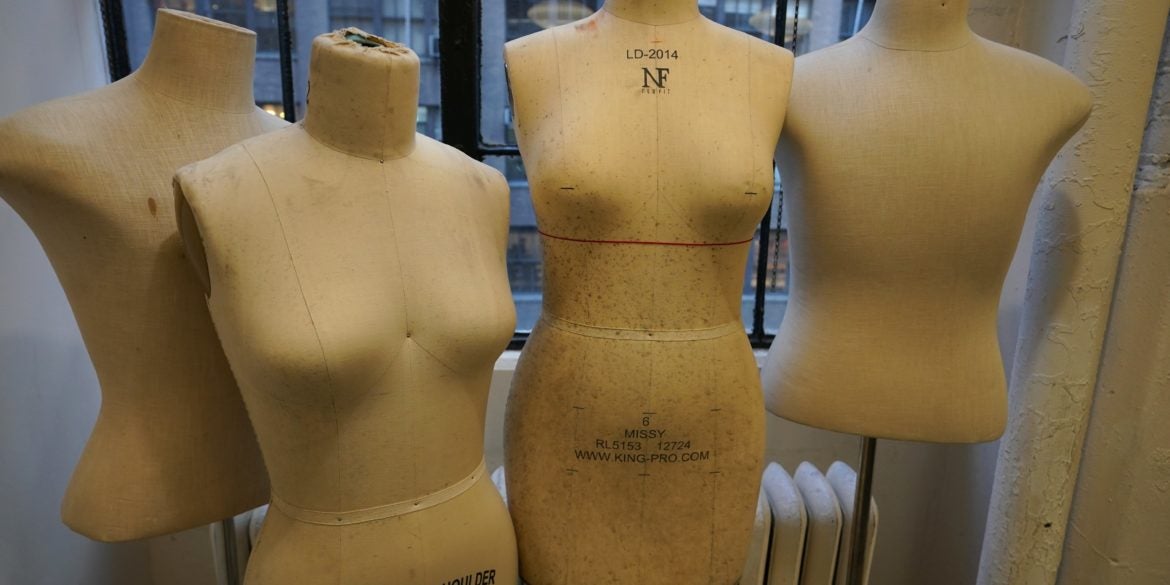 Dress forms are seen at Ferrara Manufacturing, a company founded more than 30 years ago in the Garment District of New York City, on January 16, 2020, days before New York Fashion Week (NYFW). - Sewing machines hum and steam comes off irons as thousands of workers, mostly Asian and Latino migrants, make clothes in the few surviving workshops of New York's threatened garment district. The small neighborhood, nestled amid skyscrapers close to Times Square, has lost 95 percent of its workforce since its heyday in the 1950s, when it employed hundreds of thousands of people. Exorbitant rate increases have forced many manufacturers to move production abroad; not to China but to Paris, Milan, and London. (Photo by TIMOTHY A. CLARY / AFP)

In the weeks leading up to New York Fashion Week, the factories are abuzz with activity as they get high-quality garments ready for the catwalk, but for how much longer?

The small neighborhood, nestled amid skyscrapers close to Times Square, has lost 95 percent of its workforce since its heyday in the 1950s, when it employed hundreds of thousands of people.

“It was part of the soul, the texture, the heart of New York,” says Robert D. Parmet, professor of history at the City University of New York.

Exorbitant rate increases have forced many manufacturers to move production abroad; not to China but to Paris, Milan, and London.

Some 400 companies producing clothes, buttons and other fashion accoutrement still operate in the area also known as the fashion district, according to the Garment District Alliance.

The companies employ about 5,000 workers, the alliance says.

“I’ve seen a lot of businesses close this year and last year. Once several close you see a domino effect,” says 29-year-old Gabrielle Ferrara, who co-owns Ferrara Manufacturing with her mother and father.

Her parents founded the clothing factory three decades ago but Ferrara says she’s far from certain that the district will survive as a garment center.

“I am not sure what the solution is but we’re definitely in a critical point in the neighborhood’s history,” she told AFP.

Ferrara has up to 75 people stitching clothes in the three weeks before New York’s first fashion week of 2020, which starts on Thursday.

Designers say the garment district is a unique one-stop shop that is difficult to replicate anywhere else.

“As a designer you can wake up in the morning and envision a suit or a dress or a blouse and within 24 hours or less have selected a fabric, made the pattern, selected a matching thread, buttons, zipper, a model, a photo studio, all in one place,” says Yshai Yudekovitz of B&J Fabrics, a family-owned store established four generations ago.

As shops in the area have closed down, clientele has dropped off, with stores having to switch their focus from fashion designers to other customers.

Now the stores mostly sell clothes for Broadway productions, movies and series on Netflix and Amazon Prime, such as “The Marvelous Mrs. Maisel” which is set during the district’s golden period.

For Manhattan Borough President Gale Brewer, it is imperative the area survives, in large part because it provides thousands of well-paying jobs.

“Many of the workers there are very skilled. The work that goes on often can pay 40 dollars or more an hour. We cannot lose these seamstresses and these manufacturers. They are very unique,” she told AFP.

Corey Johnson, leader of New York’s city council, says the district is “a key part of the fashion economy of the city which is both an economic driver and cultural anchor in NYC.

“Although the location of that industry has shifted it still is a significant part of who we are as a city and will be, we hope, for many years more,” he added.

Advocates of the garment district were outraged when Mayor Bill de Blasio’s city government eliminated zoning rules that had forced landlords to provide space for clothing manufacturers in 2018.

He also invested millions in a new garment-producing campus in Brooklyn.

They also obtained funds to purchase a building to accommodate clothing manufacturers and retailers, which is still to be found.

Johnson says it is too “early” to determine whether the plan is working but Ferrara fears time is running out.

“I don’t see that plan working fast enough,” she said.

Cover image: Dress forms are seen at Ferrara Manufacturing, a company founded more than 30 years ago in the Garment District of New York City, on January 16, 2020, days before New York Fashion Week (NYFW). (Photo by TIMOTHY A. CLARY / AFP)