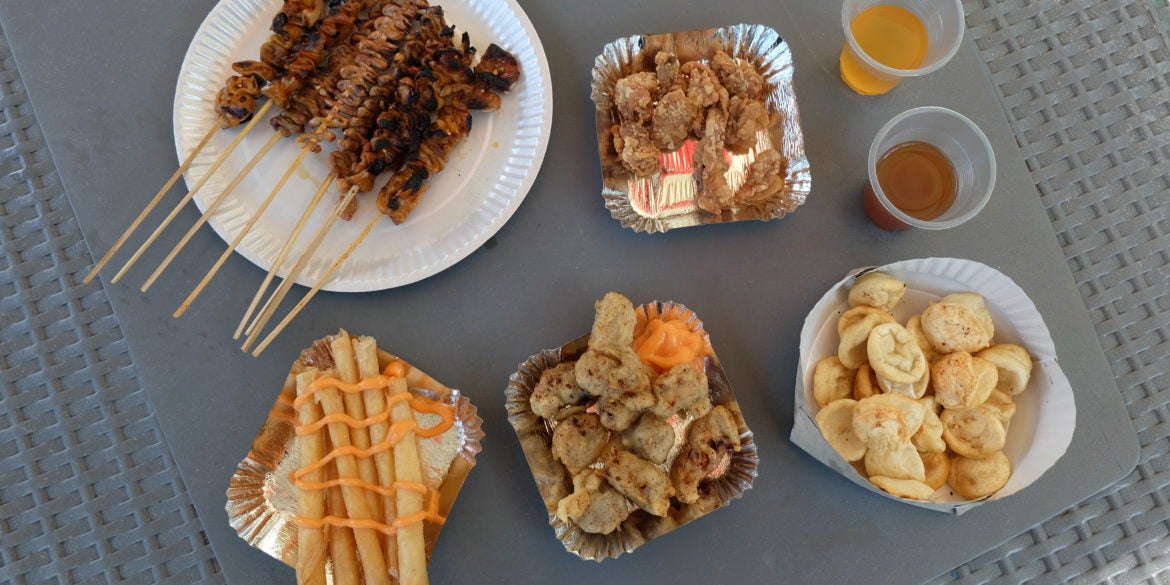 First, a confession. One of the best things about school was the grub. Among our treasured college memories were moments spent with the barkada and our favorite little hole-in-the-wall, carinderia, food stall or resto where we’d talk about crushes and moan about schoolwork while digging into our orders.

We visited some student-favorite eateries and stuffed our faces so we can tell you what’s great about them.

A. Roces Ave. UP Diliman

10 a.m.-9 p.m.Let’s start with a classic. Mang Larry’s Isawan is a University of the Philippines (UP) Diliman institution—he’s been serving his grilled isaw manok and isaw baboy since 1984. He also serves grilled goto, gizzard and liver.

But if you’ve been avoiding Mang Larry’s because eating entrails isn’t your thing, you’re making a mistake. There’s a lot of other things to enjoy here—from squid balls, chicken balls, kikiam and fish balls to siomai, cheese sticks (our favorite), dynamite, chicken skin and calamares. (Plus all the vinegar and sweet sauce you want in what looks like juice dispensers.)

You can also sit down to a full meal—there’s pork barbecue, inihaw na bangus, tilapia, pusit, pork ribs, liempo and more. Wash your food down with fruit shakes, milk tea, buko juice or soda. Prices start at P10 and the most expensive item on the menu is just P100.

Mang Larry’s has evolved and moved locations through the years, but people always find it. It is, after all, “The Famous Isawan in UP Campus.”

There are a lot of milkshakes to choose from, including classic favorites like strawberry, chocolate and vanilla to more unique creations like toffee and candied walnuts, PB&J and cherry choco mint. Some are inspired by baked goods like red velvet and strawberry shortcake, and spiked ones like drunken caramel and rum raisin.

Its Oreo collection is pretty popular, we were told. And you can make your own shake by choosing a base and adding toppings. Oh, and there are yogurt-based shakes as well.

We enjoyed the nonmilkshake menu items, too. Carnival Franks, its take on the chili dog, was great, as were the Crosstrax Fries. We’ll be back to try the other hotdogs and the Almost Famous Chix Sandwich.

8 a.m.-8 p.m. (weekdays); 8 a.m.-6 p.m. (Saturdays); closed on SundaysWe love a good success story and Ate Rica’s Bacsilog is one of them. What started as a mobile food cart at De La Salle University’s (DLSU) “hepa lane” has become a food brand with over 70 branches (it’s available for franchising). Ate Rica’s Bacsilog was built on the brilliant idea of topping classic silog favorites with a cheese sauce and… is that Knorr seasoning?

The Bacsilog is the star, featuring bite-size pieces of bacon on top of hot rice and a fried egg, sunny-side up. There are other silog options as well: chicken nuggets, tapa, corned beef, foot-long hotdog, tocino, ham, tuna, burger.

Ate Rica’s offers affordable comfort food—each order is P74, or P109 if you combine any two silog choices. There are omelets (P89) and sandwiches (P20 to P35). A longtime favorite of DLSU and UST students, Ate Rica’s is determined to bring its brand of comfort food all over the Philippines—universities included, of course.

The menu has multiple pages—there are curry, sizzling dishes, chicken pandan, pad Thai, and many dishes we still can’t pronounce. We have countless memories of seeking refuge in S.R.’s air-conditioned interiors while eating fried rice, and it’s nice to discover that, over a decade later, some things haven’t changed.

6 a.m.-9 p.m., Mondays-SaturdaysFormer bartender Mang Tootz has become famous for his Banana-rhuma, a fancy but affordable take on the turon, which is a crowd-drawer at five pieces for P20! People wait patiently for their orders while watching Mang Tootz and his staff expertly cooking the turon in enormous pans. The secret is in the glaze—a mix of margarine, jackfruit, banana essence, cinnamon, rhum, pineapple juice and brown sugar. And if that’s not sinful enough, they are topped with sesame seeds and sugar, milk and cinnamon powder. “How many of these do you sell in a day?” we asked the guy behind the counter.

We weren’t surprised. In the amount of time we were there, we watched them sell over a thousand Banana-rhumas. (Another confession: We bought 60 of them. And if you think that’s a lot, the lady behind us ordered a hundred.)

Go for the Banana-rhuma, but stay for Mang Tootz’s other offerings as well—the students sure do. There are rice meals that include soup (it was tasty egg drop on the day we went). The bestsellers are the Bicol express (our pick!), sisig and liempo, and we likewise enjoyed the arroz a la Cubana. Mang Tootz also has a branch in Makati (Valero Plaza, 124 Valero St., Salcedo Village).

Where do you eat in school? Nominate your favorites for a feature (or write about them for us!) by emailing [email protected] Use the subject: EAT THIS.