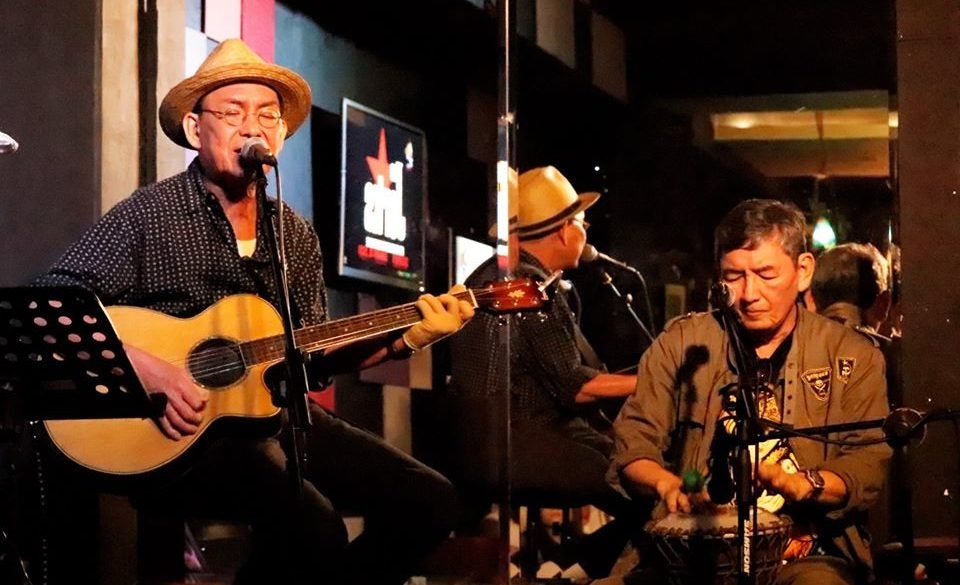 Everyone knows that Valentine’s Day is one of the most commercialized occasions that persuade us to go out and spend for dinner, which usually comes with a live musical performance of romantic songs.

For a different kind of Valentine date, here are three successive shows at one venue that will feature musical artists of the alternative kind—not too pop but nonetheless interesting for their repertoire.

Filipino hippies and fans of Pinoy folk music in the 1970s and ’80s surely remember the group Asin and its lone female singer-songwriter, Lolita Carbon. Asin has long disbanded, but Carbon is still active, and this is the chance to catch her playing tunes that will include her composition “Himig ng Pag-ibig,” one of the most heart-tugging Pinoy love songs of her era. The first three lines alone will make a couple’s night out memorable: “Sa pagsapit ng dilim/Ako’y naghihintay pa rin/Sa iyong maagang pagdating…”

Enduring Pinoy rock band The Jerks doing a Valentine show might sound incongruous, but we know that frontman Chickoy Pura has an extensive knowledge of romantic tunes by both local and international artists, not to mention his own bittersweet take on unrequited love, “Kun’di Man.” The Jerks’ personnel for this night are Pura on guitar and vocals, actor and Pura lookalike Dwight Gaston, percussion, and Rey Abella, keyboards. If he’s up to it, maybe Pura can do some Lou Reed stuff.

Luna is a three-piece, punk-influenced Pinoy rock band known for its covers of U2 songs. Of course we won’t expect to hear Bono’s politically charged anthems, although U2’s love-inspired tunes still ring with social awareness.

Entrance fee to Lolita Carbon’s show is P300, while those of The Jerks and Luna are free. The food is good and reasonably priced.

Cedric Escobar is a 24-year-old aspiring singer whose dad Mel and mom Lou are successful Filipino immigrants in New York City. Escobar wants to pursue music as a career in the Philippines, so he’s in Manila most of the time.

He happened to be in NY when the Pinoy band South Border (SB) went on a seven-city US tour, and promoters put Cedric as front act. SB management says he was so well-received in all seven dates that SB’s Jay Durias committed to help Escobar break into the local scene, initially by acting as Escobar’s vocal coach.

On Feb. 6, Escobar sang a few songs at SB’s regular Thursday set at 19 East and we were impressed. Invited by Durias to come up onstage, Escobar looked a bit nervous but drew our attention to his R&B-inflected vocals during a Boyz II Men medley.

At certain moments he sounded raspy, which, intentional or not, added character to his voice.

At the same gig, Durias also called his daughter Kahlil to play drums. She’s a joy to watch, performing with confidence and flair at age 20. INQ