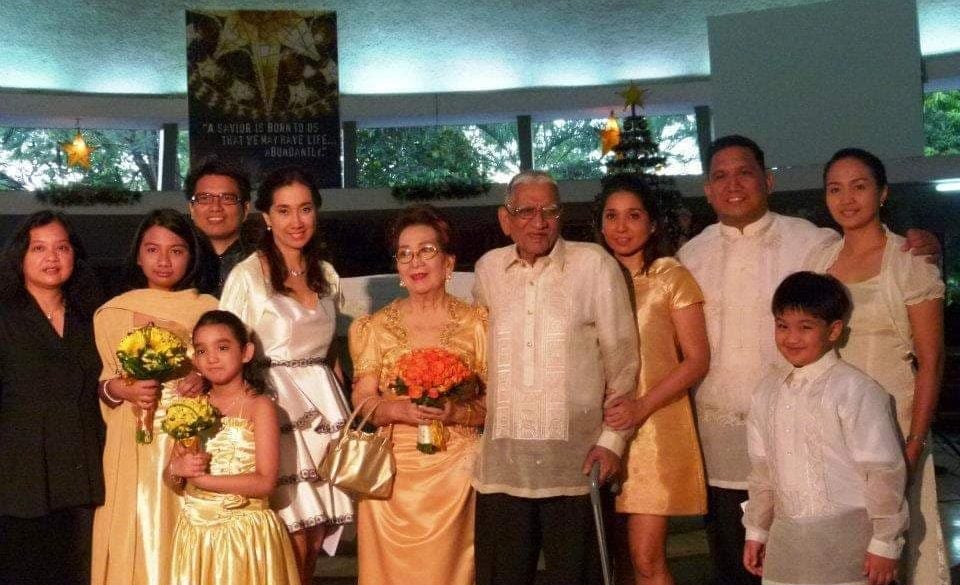 The Ryes at their golden wedding anniversary in 2012

How a Sikh found love and a life in the Philippines

Lourdes Napalinga, or Lulu, was a Filipina journalist—independent, smart and feisty. Ajit Singh Rye came from India, 4,630 kilometers away, to study in Manila on a scholarship.He was the only son of five children of Prab Singh and Isher Kaur of the small village of Sujon, and was delivered to the world by a half-blind midwife of the untouchable caste. His mother read to him Hindu and Sikh scriptures and instilled in him a deep sense of social consciousness, filial piety and respect for elders.

The young Rye came to Manila by boat in 1951, wearing a turban covering his long hair, a beard and a bracelet, while carrying a small sword, too—the mark of a true-blue Sikh. He had let go of all these accoutrements by the time he knew Lulu, all but his traditional bracelet.

He first enrolled at the University of Santo Tomas (UST) and later moved to the University of the Philippines in Diliman (UP), where he became a student research assistant in 1952. There, he became a lecturer and instructor of political science in 1956. Thirteen years later, he became assistant professor. To gain Filipino citizenship, he learned by heart our National Anthem and Panatang Makabayan, and he got it in 1976. He became dean of the UP Asian Center, the graduate school for Philippine and Asian Studies, from 1986 to 1991.

About his decision to stay in the Philippines for good, Rye wrote: “Leaving India had its own pain.” He said it was difficult and a burden to explain to his aging father and loving sisters why he chose to stay and live in a foreign land for good. After all, he promised them it would not take long before he returned. He continued, “It did not occur to me that my fate and fortune were somehow inextricably intertwined with this strange land.”

It was at the National Press Club in Manila that Rye first met Lulu Napalinga. A graduate of journalism from UST, she was writing for Kahirup magazine in Bacolod, and later published it herself in Manila. It was a meeting that blossomed into romance. They wed six months later, in 1961.

Recalls Santosh Powar, daughter of Rye’s sister Bachan: “My mom would sit and tell us stories, and tears would trickle down her cheeks whenever she talked for hours about our Mamaji (Uncle) who has gone to a foreign land.”

It took 13 years before Rye returned to India, in 1964, and found his four sisters already with big families of their own. All their children were taught to love their Mamaji just like their mothers did. His parents had passed away by then. He himself had a big family with seven children—Ajit II, Rabinder Dickton, Lourdes Rajini, Indira Aruna, Ranjit, John Marcel and Satjayit.

The death in 2011 of his firstborn son brought Rye so much grief. His daughter Indira recalls: “The early death of Jeejit (Ajit II) of cancer had the biggest impact on him, I think, and changed his remaining life forever. He became extremely depressed. He lost all his permanent teeth within a year. He was already 85 then, and he asked me why God didn’t take him instead. That was the only time I heard him question God.”

Satjayit, the youngest son, remembers his father’s bouts with asthma and his cornea transplant to address the onset of glaucoma. “But the most challenging,” he says, “was the everyday grind and stress he had at work and at home to make sure all of us were adequately looked after and safe, and that his advice to us was followed and manifested every day. He was tough and resilient, and optimistic, which is why he endured life’s challenges.”

He thinks his father left behind a legacy of love, concern and commitment to family, community and country. “He always reminded us to be humble and modest, and to sacrifice our personal gains for the greater good and welfare of many, of family and friends.”

The dean of UP Asian Center, Joefe Santarita, says of Rye: “His presence alone has contributed to the instituting, if not strengthening, of the South Asia track of the Asian Center. He also placed the Asian Center in the limelight as a hub of learning within and outside the university because of his network in national and international levels.”

Former Asian Center dean Mario Miclat adds of Rye, “He has been a guiding light, a wise teacher. In so many discussions, academic activities, social activities and interactions with people, I found in Dean Rye an outstanding Filipino.”

Ajit Singh Rye, the Sikh, found love and life in the Philippines, and his life of service gave him joy, until his last breath.

As for his traditional bracelet, he wore it until his dying day. Last month, at age 93, Ajit Singh Rye bade the world farewell, six months after Lulu’s passing, and a few days before their 58th wedding anniversary.

I find this quote from Rabindranath Tagore appropriate, as though coming from Dean Rye himself: “I slept and dreamt that life was joy. I awoke and saw that life was service. I acted and behold, service was joy.” —CONTRIBUTED INQ