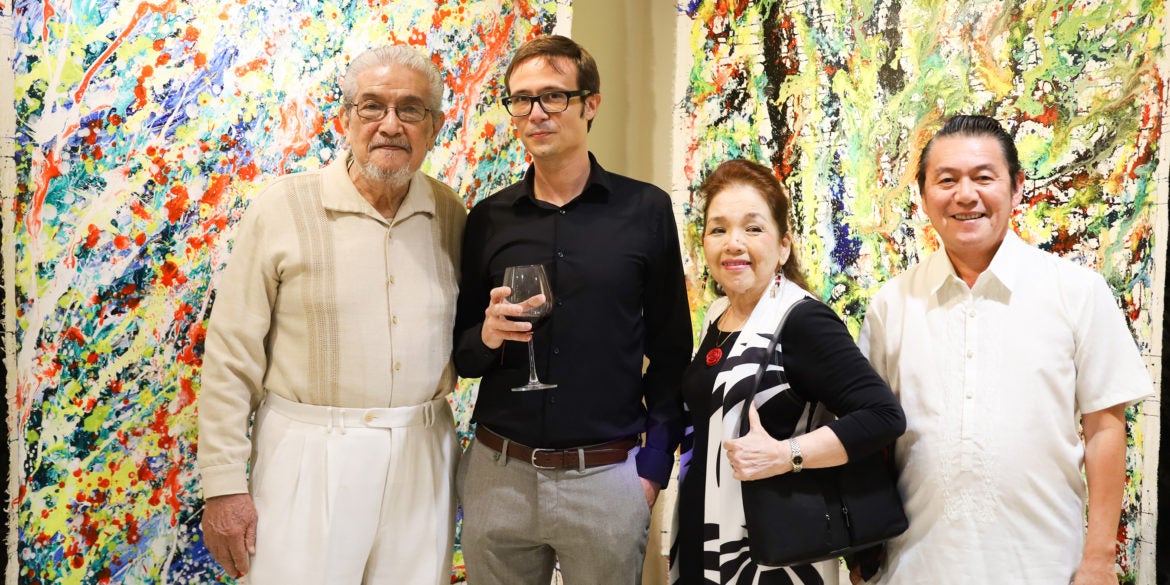 It has taken the Alliance Française de Manille (AFM) on the occasion of the French cultural agency’s centenary to remind art lovers of the prodigious art of Allan V. Cosio. We are talking here of his solo exhibit, “Still in Awe of Nature,” running until Feb. 25 at AFM’s Total Gallery.Consisting of some 30 large-scale nature abstractions on canvas left freely hanging without the wooden frames, the exhibit is very impressive.

The sheer variety of the abstracts, their diverse color palette, and the sweep and breadth of the gestural approaches employed to achieve their unique effect, leave the viewer in awe. Considering Cosio is 75, the feat is nothing less than staggering. Or as a nod to the French celebration, nothing less than Napoleonic.A versatile artist, Cosio’s work runs the gamut of styles and genres; he’s excelled in both representational and abstraction and melded both seamlessly. While “Still in Awe of Nature’ does not pretend to be a retrospective of his abstraction, much less of his general oeuvre, the works on show depart from his earlier abstracts along the Op Art style that marries mathematics and illusionism, influenced as Cosio was by the French-Hungarian Victor Vaserely (1906-1997) and the British Bridget Riley (born 1931).In contrast, “Still in Awe of Nature” hews close to the spirit of abstract expressionism. Cosio’s abstraction is vehicle and exploration of the expressive content or emotional state of the artist’s sensibility when it comes into contact with the experience of nature.

That Cosio expresses “awe” and wonder at the marvels of nature across a series of monumental canvases should reaffirm nature’s inexhaustible power to move the human soul to expressive heights.

It is to the credit of Cosio that his creative soul remains open to the stirrings of the spirit that nature embodies in all its forms, colors and contours, which the artist promptly transposes in his dramatic canvases in all their awesome naked glory. INQAlliance Française de Manille is at 209 Nicanor Garcia Street (formerly Reposo), Bel-Air II, Makati City.