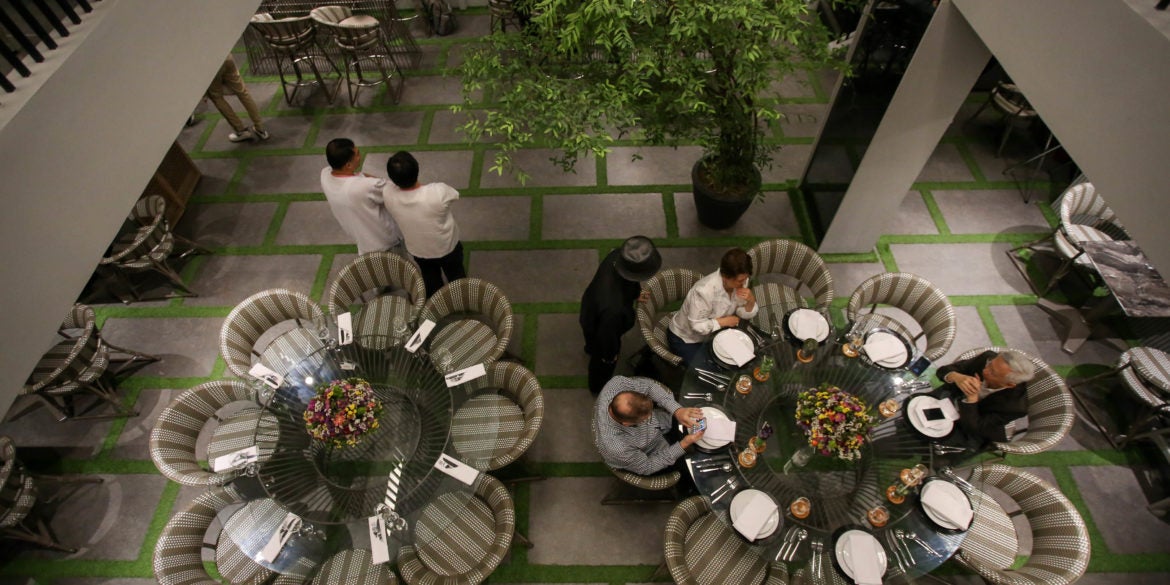 How snacks tycoon and construction magnate built café for millennials

It’s Valentine’s eve, and Philip Cruz and Carlos Chan are looking pleased as they survey the early-evening crowd that is starting to stream into their Bloom Café + Bar, in that high-traffic corner of Greenbelt 2 where Nuvo bar used to be.

There was some slowdown in business just days prior, on their fourth week of soft operations, owing to the COVID-19 scare, construction and mining magnate Cruz tells us. “But that looks to be over now. Only those in that area made reservations,” he said, pointing to a large group of Japanese expats on the mezzanine. “Everyone else is walk-in.”

The al fresco bar, where a singer-pianist is performing, is also now full house—a mix of couples on pre-Valentine dates and after-office revelers.

Just the day before, Chan, the food-manufacturing kingpin behind Oishi and Liwayway Group of Companies, also received word that three of his 15 factories in China had resumed operations following mandatory closure after the virus outbreak. Only those three near Wuhan had been affected, he says.

Cruz and Chan, the Philippines’ special envoy to China and older brother of Bench honcho Ben Chan, have been friends for 42 years, but Bloom is their first business venture together.

Cruz was part of the group that ran Nuvo, and Venezia bar before that. He and his remaining partners had kept the lease for the spot. Ayala Malls asked Cruz to spearhead the upgrade of F&B offerings at Greenbelt 2, as Ayala prepares for the reopening of Greenbelt 3 that will house all-luxury brands.

“I knew Carlos long before we were introduced by a common Japanese friend. I was an admirer,” says Cruz. “My dad [the late construction tycoon F.F. Cruz] was my No. 1 idol; Carlos was No. 2.”

“I just follow him. I trust him,” Chan explains simply on what convinced him to come onboard.

Other than the Chinese restaurant in the hotel on Pasay Road in Makati, Jinjiang Inn, which Chan coowns, the billionaire has never been a restaurateur. But like Cruz, he’s an epicure who names Shanghai, his other home, as his favorite food city. “He’s the king of snacks. Any food that’s addictive, he knows. So he guides me on the retail side,” said Cruz.

Bloom was designed to cater to the café crowd—millennials and their families, Cruz says—“because the Nuvo crowd has also gotten old and we want nutrition and just chill… The [former patrons of Nuvo] now want good food and better wine, not just more wine… We’ve been all over the world and we only want to share what we’ve tried all over the place. If it makes a profit, then that’s even better.”

Cruz says that by creating their own concept instead of bringing in a franchise brand, they could prove that Filipinos can also make food just as well as other food cities. A chef who has worked in cruise ships and in Europe for 35 years mans the Bloom kitchen.

With millennials in mind, the food, like the setting, is designed to be Instagrammable.

In the coming months, the walkway that connects Greenbelt 2 and 3 will be transformed to make way for a gelato bar, a pizzeria and a nicotine bar for smokers. There’s also a coffee bar. They’ve kept the original al fresco cocktails area of Nuvo since expats prefer to hang out there, while Filipino diners like to be in the air-conditioned indoors, says Cruz. Bloom can sit up to 200, including the mezzanine section.

As a compromise, the café is designed like a lanai-slash-garden, abloom with flora and greenery on large planters, a nod to its name. It has tall glass walls, partial faux grass flooring, and fresh cut flowers on the tables. Clear glass-top tables add to the airy, clutter-free feel of the high-ceiling, main dining area.

The bar outdoors is framed with tivoli lights—a glorious view at night.

The overall look is the handiwork of Ivy and Cynthia Almario, with inputs from Cruz’s wife, Ching.

The chairs of sturdy resin wicker, Cruz also points out, are designed for lingering—there are even charging ports for diners who just can’t part with their phones. “They don’t have to give up their phones to spend time with family and enjoy good food.”

The walls are also a changing gallery of artworks —at the moment, floral paintings of Isabel Diaz are on show—to support artists, says Cruz. The previous night, Bloom hosted the preview party for the Asian Cultural Council auction.

“I bring my amigas,” says Ching Cruz, who’s easily one of the most well-liked hostesses in town. “We love it here.”

“We’re older now, we’re more sedate,” adds her husband. “We no longer have the beat of the bands from the Nuvo days. But hey, we still have piano music, and we’re open until 11 p.m.”