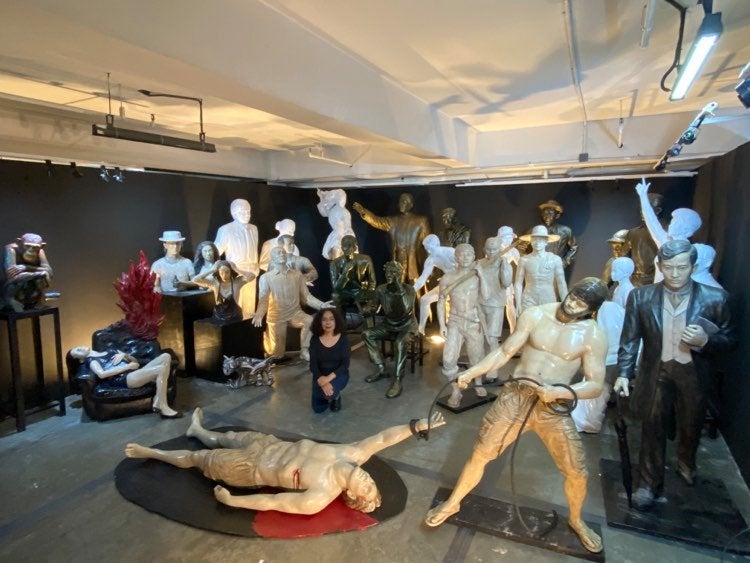 Julie Lluch is raging. Like the Dylan Thomas poem, “Do not go gentle into that good night,” the foremost Filipino sculptress still rages, four decades into her art.

At the Art Fair Philippines 2020 in Makati, a three-dimensional version of Juan Luna’s 1884 “Spoliarium” is the centerpiece of Lluch’s tableau of more than 20 sculptural pieces in cold cast marble. Occupying a 70-sq-m space, “Irresistible Grace: In the Time of Plague” is Gallerie Stephanie’s offering and is one of the biggest solo exhibits at the fair.

The prolific terra-cotta sculptress, famous for depicting women in subjugation and their challenge to patriarchy, borrowed Luna’s metaphor on the sufferings of the Filipino people under Spanish rule.

She says of her latest installation: “I have appropriated Luna’s concept of state brutality to recreate a scenario that is repeated many thousand times over in the streets and alleys among the poor across the country.”

Completing the tableau are pieces that surround the two main figures of the modern “Spoliarium.” One is a grieving woman, a portrait of Josephine Bracken, holding in her hand a long list of names of actual victims of extrajudicial killings (EJK) culled from police sources. Other larger-than-life sculptures stand in the background like mute witnesses, nay, sentinels or ghosts from the distant past, guarding the bloody present: José Rizal, Emilio Jacinto, Jose W. Diokno, Manuel Quezon, Cory Aquino, Francisco Balagtas, and other heroes as well as ordinary people. They are, in fact, reproductions in cast marble of their bronze originals in Calamba, Dapitan, Iloilo, Batanes, etc.

Lluch says the National Historical Commission of the Philippines asked her to make monuments of Filipino heroes, statesmen and martyrs. “The assignments took me away for some time from doing personal art, but it was tremendously educative and inspiring.”

The project helped her to get acquainted with local heroes. One of them was Nazaria Lagos, known as the Florence Nightingale of Duenas, Iloilo. She built a hospital and took care of Filipino and American soldiers in World War II.

Another was Juan Agudo, hero of Batanes who, as governor, was beheaded by the Japanese. “These heroes stand mutely behind my modern ‘Spoliarium,’ silent judges of our present lives,” emphasizes Lluch.

About her choice of subject, Lluch says: “Art is a knee-jerk response to the immediate stimulus obtaining in the times we live in. The artist’s commitment is to truth. It is emancipating when I’m able to voice a truth even if there are other voices—dissenting, indifferent or complicit with the powers that be.”

She recalls chancing upon a Facebook post of an actual poster from the 1950s with the statement: “Beware of artists, they are most dangerous.”

She asks, “Who’s afraid of artists?” and then replies to her own question, “Men like US Sen. Joseph McCarthy (who made accusations of subversion or treason without evidence during the Red Scare period in the US in the late 1940s through the ’50s), and the likes of him who muffle the truth.”

She explains that her exhibit’s title, “Irresistible Grace,” is “a theological usage familiar to five-point Calvinists like me. It refers to God’s overwhelming sovereign will in choosing His elect that overpowers even the stiff-necked rebel.”

She defines the meaning of grace as undeserved merit. “For me, it is a beautifully shining scriptural truth that releases the heart completely from struggle and anxiety.”

She attends bible studies twice weekly, with the Church Café group of writers and artists every Wednesday, and the Chariots of Fire group every Thursday.

In her exhibit title, Lluch added “In the Regime of the Plague” which she says is an indictment of “the political injustices and oppression in the present administration.” She believes that the brutality of its drug war has risen to epic proportions that can be compared to the horrors of a viral plague. “It is even worse because its war on drugs targets the poor, while pestilence does not choose its victims,” declares the activist artist.

From clay to cast marble

For 30 years or so, Lluch has been identified as a clay artist. She waxes nostalgic: “There is something about clay that one gets romantic about. My daughters have imbibed this attachment and chided me for ‘abandoning’ it in favor of a new medium.”

But she adds that in the last few years, supply has run out and she promised herself to go directly to the source which is in Iloilo.

She started using cast marble with acrylic pigment for her personal pieces featuring her three daughters—Sari, Aba and Kiri Dalena—in her 2016 exhibit “In the Fullness of Time.”

The theme of that exhibit is very close to the artist’s philosophy of Kairos (God’s most opportune time) intersecting with Chronos (man’s chronological time).

For “Irresistible Grace,” Lluch also uses cast marble even as she believes “clay is wonderful, pleasurable to the touch and the ‘nobler’ medium.” Clay is, however, limiting because of the problem with the size of kiln, while cast marble, which is a compound of resin, fiberglass and marble, “is sleek, cold and hard” but has the strength which clay doesn’t have.

Lluch listens to varied music while working—from Mahler to Cole Porter and U2, to Mozart, Bach and Beethoven.

She says that she has taken advantage of her being a senior citizen and, correspondingly, of her hard-earned right to say and do what she pleases. “Art is its own reward,” she concludes. —CONTRIBUTED