Fun things to do with your kids to keep them busy

My daughter Juno goes to a preschool that has a Helping Hands program, where families are asked sometimes for supplies of rubbing alcohol, wipes, recyclables for projects/props, containers, healthy snacks and play-doh.

When my son Jack attended the same school, we were even given a recipe for homemade play-doh if you didn’t want to buy from the store. We had fun making it together throughout his preschool.

Recently, while backing up our computer files, I saw photos of my son when he was 3 as he was making play-doh. I realized I hadn’t even made a batch with my second-born. I must add that on my to-do list for the weekend.

Good thing the recipe is still pinned to our refrigerator.

Mix 1 cup flour, ½ cup salt and 2 tbsp cream of tartar in saucepan. Add 1 cup water and 1 tbsp oil to the mixture. Stir continuously and cook for 5 minutes over low heat. You’ll need to put some muscle into it. Cool slightly. Knead until smooth and manageable, then cut into portions. You can add food coloring to each section and knead in the color until well blended.

These store well in a Ziploc bag until it gets too tacky to use. I like that it’s nontoxic so accidental ingestion wouldn’t be so bad (dirt stuck on it, worse). It’s also an affordable way to refill those plastic play-doh tubs when they eventually get too hard to play with. They’re also great, colorful and useful giveaways at parties and make thoughtful presents. 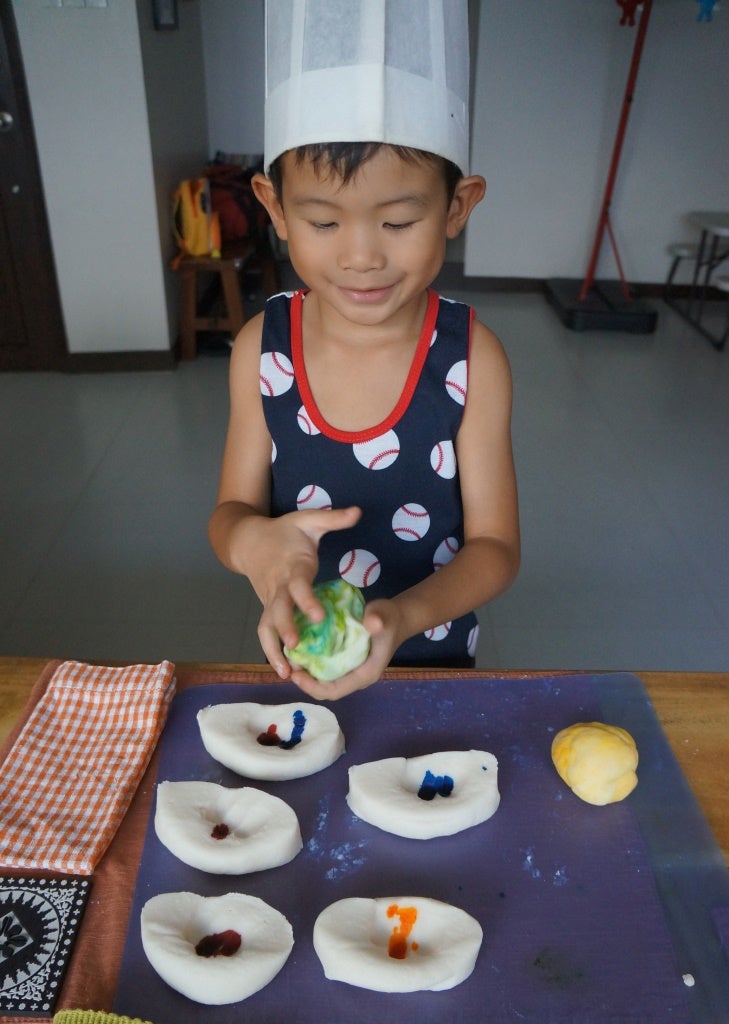 Another way to reuse old, tacky play-doh is to fill up deflated balloons with it. Fasten tightly and you have a stress ball(oon).

On my bedside are scribbles of notes for when I need to do a brain dump so I can attempt sleep with a clearer head. Most of the time, I am able to make sense of these brain dumps when I get to reassemble them into doable lists.

I tried to do phone alerts but they don’t work for me as well because they are snoozable. Also, there isn’t as much satisfaction deleting a task performed; physically crossing it out with a pen the analog way gives this Gen X-er a better dopamine hit.

Anyway, one such important brain dump was this collection of assorted sensory play recipes I gathered online back in the day when I had only one child. I always thought I’d eventually get to make them, but not all good intentions come to pass.

I did get to make cloud dough, which is probably the parent of today’s kinetic sand. Jack went to town with cloud dough; I just parked him with it and I could have some time to myself. It was also a hit in his second birthday party.

Juno’s the same with kinetic sand. Wait—yet another thing I hadn’t created with her!

Cloud dough: Mix 8 cups flour with 1 cup baby oil (or 1 cup flour to 2 tbsp baby oil if you want to slowly scale up).

Here are the other recipes I scribbled—maybe you will have better luck actually making them!

Skin therapy play-doh: Mix 1 cup flour with 1 cup water. Add 2 cups of oatmeal and 2 tbsp olive oil. You can add 1 tsp vanilla and 1 tbsp cocoa powder if you want it to smell chocolatey. Knead it together for about 3 minutes and add up to 2 tbsp of flour if needed.