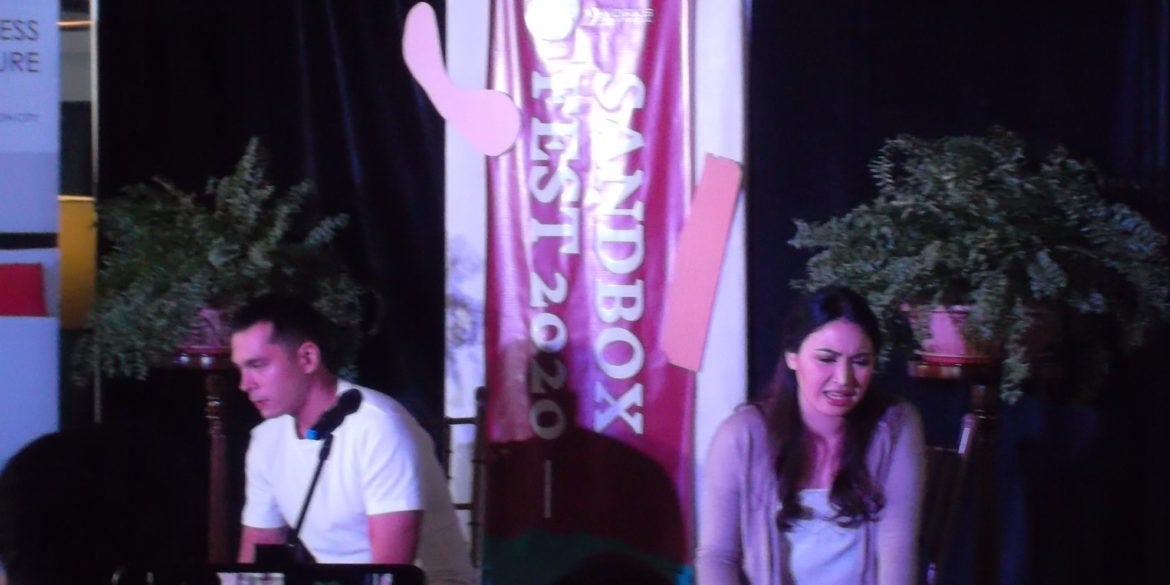 Jake Cuenca and Sab Jose enact a tense scene from “Lungs” during the press conference.

“How were you able to shift from English to Filipino, from radio-TV to the theater, and from being a hunk-sex object to serious actor?”

The question was asked of actor Jake Cuenca at a recent press conference at Privato Hotel in Quezon City to announce “Sandbox Fest 2020,” the two-show festival of the Sandbox Collective and 9 Works Theatrical.After reflecting for a while, and as the laughter and giggles died down, Cuenca replied: “It is hard, it is very hard work but I would advise young aspiring actors to follow the same path.”

Cuenca is reprising his role as the man (with Sab Jose again as the woman) in the intense, two-actor play, “Lungs,” by acclaimed English playwright Duncan Macmillan, known for his edgy plays on provocative social issues. “Lungs” is directed again by Andrei Nikolai Pamintuan, with Caisa Borromeo as assistant director.

“I want audiences to see how intense, complicated and beautiful relationships can be,” said Pamintuan.

Both Cuenca and Jose have impressive credentials. He studied at the Lee Strasberg Theater and Film Institute in New York while she graduated with honors from the Guildford School of Acting in London with a master’s in musical theater.

In the actor- and dialogue-driven play, the two characters face the audience, seated, for 190 minutes as they argue about family, change, hope, betrayal and pain, and the possibility of having children “with everything going on around us.”

Also to be restaged, and on the same evening this time, is Macmillan’s play about mental health, “Every Brilliant Thing,” directed again by Jenny Jamora. It stars Teresa Herrera alternating with Kakki Teodoro.

The play is supposed to be from the point of view of a 6-year-old child whose mother is in the hospital because, according to her father, she has “done something stupid.” The child is unhappy and so she makes a list of everything that’s brilliant for her, like ice cream, kung fu movies and “burning things.” Soon the list takes a life of its own. The format is audience interaction so in this spirit Herrera, during the press launch, chose media persons one by one and began to dialogue with them.

In the Philippine production, the point of view is first from a 9-year-old child and then a grown woman.

“As the show allows the audience to shape their particular evening’s (or matinee’s) show via audience participation, so every member of the audience is called to be part of our nation’s mental health conversation,” said Jamora.

Appraising the two productions, Sandbox Collective managing artistic director Toff de Venecia observed: “With ‘Every Brilliant Thing’ we were happy to have done our share in shedding light on the subject of mental health that continues to grip the country today. Now with natural disasters occurring left and right, and significant doubt materializing in the age of anxiety, perhaps ‘Lungs’ has gained a horrific new timeliness as well.” —CONTRIBUTED