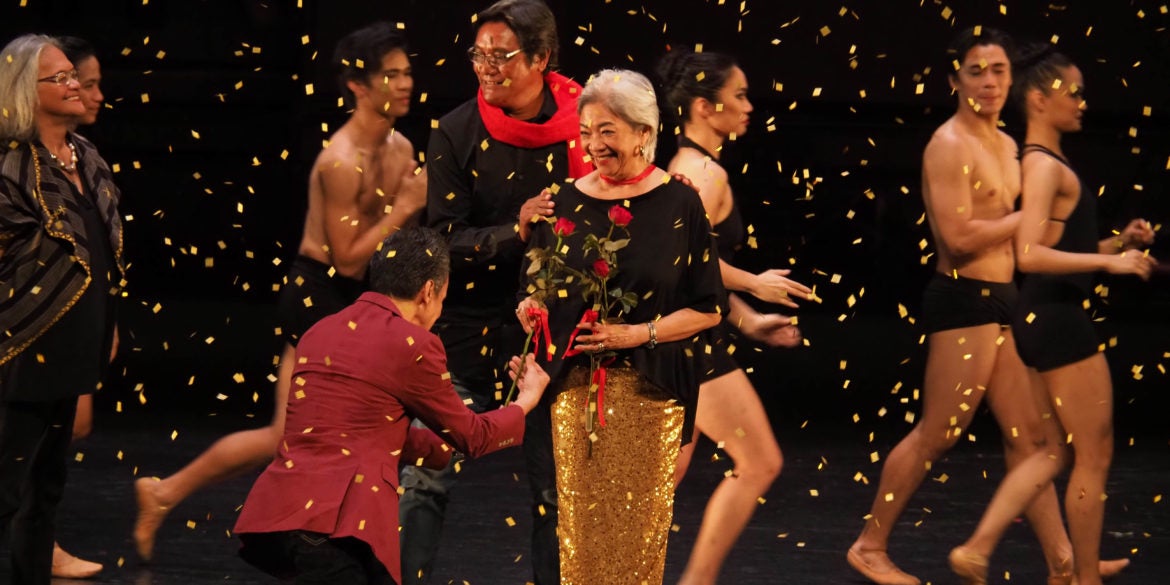 A well-deserved tribute to Alice Reyes

Despite an ominous cloud of uncertainty regarding the future of Ballet Philippines (BP), the lobby of the Cultural Center of the Philippines (CCP) began to fill up on the evening of Feb. 21, as early as two hours or more before the scheduled performance of what would be the 50th anniversary of the very first concert presented by the Alice Reyes Dance Co., as it was known in 1970.

The controversial internal skirmish between BP—a CCP resident dance company—and its board of trustees fueled support for its embattled artists and Reyes, BP founder and National Artist for Dance. There were no signs of gloom permeating the CCP lobby gathering, but instead, there was a palpable enthusiastic, celebratory vibe. Succeeding in the petition for a venue grant after the threatened cancellation of the show, the presentation was retitled “Alice and Friends: A Tapestry of Dances, Featuring Itim Asu,” in reference to one of Reyes’ early works.

For the opening piece, Adam Sage’s “Glinka’s Valse” set the spirit of the evening with its sparkling, breathless neoclassical choreography carried forward by an almost pause-less waltz by Mikhail Glinka, considered the father of Russian classical music, whose work directly influenced other composers like Tchaikovsky and Stravinsky.

As the music steadily flowed from phrase to phrase, the seven bright-eyed female dancers and lone male dancer floated in and out, in consonance with the melody. At the end of the piece, there was no recourse for the audience but to burst into thunderous applause.

All eight dancers are definitely on the rise: Katrene San Miguel, Al Abraham, Jemima Reyes, Monica Gana, Sarah Alejandro, Stephanie Santiago, Jessa Tangalin and Gia Gequinto. Their well-defined technique only lent itself to the sharp emphasis on musical accents in the seamless, melodious score. Katrene San Miguel and Al Abraham partnered with such ease, San Miguel light in her lifts, and Abraham strong in his catches and transitions.

“Man Pointe” and “We” are two works by two company members, Erl Sorilla and Lester Reguindin, respectively. Both pieces deal with gender issues, but unlike other choreographies that tended to underscore the obvious with the use of shock value like nudity or physical suggestiveness, “Man Pointe” and “We” delivered the message with elegance, quiet drama and an eloquent richness in terpsichorean language.

Sorilla’s angular and sharply accentuated movements either in unison, suspended or offbeat syncopation did well to add an edgy texture to Chopin’s otherwise sympathetic etude. Victor Maguad’s impeccable rendition of the steps contrasted the sentimentality of this well-loved and familiar piece with his defined angst. With every season, Maguad has consistently delivered dance excellence that doesn’t seem to stop improving.

“We,” while a bit more histrionic, still did not dwell on the high pitch, but rather made use of a progressive narrative to bring home the issue of gender acceptance in a judgmental society, using gender-identifying clothes as the tool to close the narrative with amusing wit.

The atmosphere shifted as the a cappella blending of “Dahil sa Iyo” by the Madrigal Singers introduced “Bungkos Suite,” bringing back memories of the dance company’s early days, with Reyes’ signature modern choreography. Completing the medley were “Chitchiritchit,” “Dandansoy,” “Telebong” and “Dabada,” each song depicting various moods typical of Filipino sentiments.

“Ne Neh Ledej” was first presented in 2016, staged by well-known Spanish choreographer David Campos, who is no stranger to BP. He is married to former company member Irene Sabas, and had staged two full-length ballets at the CCP in March 2012 (“Giselle” and “Sleeping Beauty”) with his own company based is Barcelona. “Ne Neh Ledej,” with music by Czech composer Iva Bittova, is a witty mix of the neoclassical, modern and classical dance genres. It centers on influences of colonizers on conquered lands, producing a cross-cultural shared heritage, interpreted by this hybrid of dance styles. As Campos blends classicism and exoticism, this demand for shifting dance styles was transitioned flawlessly and joyfully by five pairs of dancers.

The highlight of the evening was “Itim Asu,” first presented in 1970 as a collaborative effort of Reyes, composer Alfredo Buenaventura, with a set designed by visual artist Jaime de Guzman, and costume design by Arturo Cruz. The dance narrative is based on Virginia Moreno’s play, “The Onyx Wolf,” inspired by actual historical events surrounding the murder of Gov. Gen. Bustamante in 1721 by hooded men at the Residencia in Intramuros.

Dancing the role of the vengeful wife, Luisa, who transfigured into “La Loba Negra,” or the onyx wolf, was Denise Parungao, who is noted for her well-rounded grasp of the roles she plays, whether as a comedic stepsister in “Cinderella” or the ill-fated lover in “Giselle.” As a woman seeking revenge, her movements in vengeful mode were alternately vast and sweeping, in contrast to the deeply contained contractions she executed in her grief. Her stage presence was ominous, her swooping ronde de jambes all encompassing. In its 1970 premiere, this role was essayed by Ms Reyes herself.

Jessa Tangalin took just about a day and a half to learn “Negro Spirituals,” a medley of three songs, mentored by Reyes, who on Feb. 21, 1970, choreographed and danced this modern piece as well. If there was one piece that exhibited the ultimate vintage Alice Reyes technique, this was it. The contractions, the flexed feet, the outstretched hands, were all mastered by Tangalin in a few hours, and with longer mentorship, the technique can surely become second nature to her. Certainly, there will be a variety of future roles awaiting Tangalin. She is truly a dancer to anticipate.

When finally, after the incredible darkness of being in “Itim Asu,” Augustus “Bam” Damian’s “Afterwhom” at once delivered liberation and freedom, for as the curtain rose, the whole stage and backstage was exposed, as were the half-dressed dancers’ bodies in black. The piece, as the choreographer described his intent, is “a bold showcase of BP’s dynamism and bravado. It highlights the company’s prowess in modern, contemporary and neoclassical genres,” which the piece employs, underscored by the music of Jerrold Tarog, a Filipino composer whose heavy tones of foreboding were both prodding, energizing, hopeful and triumphant in the end.

“Afterwhom” was an apt choice for the ending of an evening that proved to be as satisfying as consuming a five-star Michelin menu, with a joyfully unexpected treat of exceptional professionalism and elegance under pressure, a dance of vengeance, so to speak, to lay claim to the vision which a national dance company like Ballet Philippines stands for. As foreseen by Reyes 50 years ago as BP founder and National Artist for Dance, it was this: to have a company that can excellently do anything from the classical to the modern, encouraging the Filipino artist to cull inspiration from his own experience, patrimony, genealogy and heritage. —CONTRIBUTED