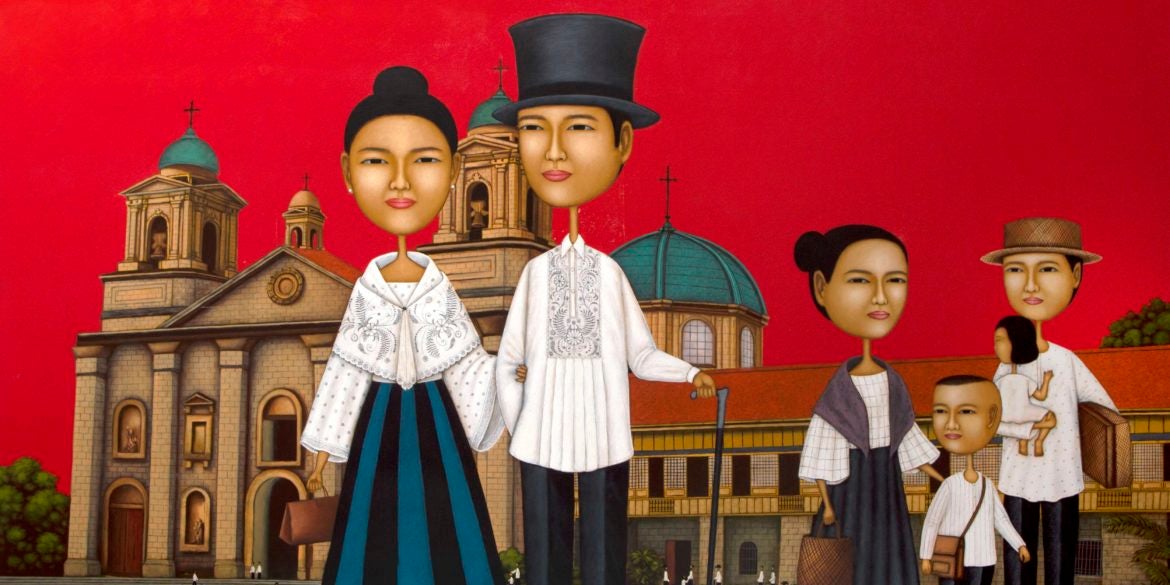 Organized by Galerie Joaquin, the exhibit will open March 5 at the Rigodon ballroom of The Peninsula Manila. It will mark two decades of the artist’s successful career.

Rubio is the master of neo-genre. He has been described by art critics such as the late Reuben Cañete as “the modern-day Damian Domingo” with his depictions of various Filipino archetypes.

With his signature and endearing portraits of turn-of-the-century Filipino characters with long elongated necks and garbed in period clothes, Rubio highlights the Tipos de Pais genre of Domingo (founding director of Manila’s Academia de Dibujo y Pintura of 1821). In this genre, depiction of the figures, clothes, commerce and activities of the residents of the Philippine archipelago became part of the country’s artistic recorded history whether these be the ilustrado or comprador class, merchants, farm workers, or local folk.

Before the invention of the camera, the Tipos de Pais was the initial encyclopedic impetus in describing the kinds of people (hence, “tipos de pais” or literally, “people type”) who lived in the colony. Rubio appropriates more or less this “art of the type or the typical” as an indicator of personage and class/ethnic station in colonial Manila.

Rubio’s success as an artist is in his capability to depict the past as the present. Using scenes from the country’s colorful past, the artist succeeds in drawing his viewers to enter his world and identify with his characters.

Three themes are dominant in these set of works that the artist is preparing for his “Mondial” exhibition: Old Manila depicting Hispanic colonial architecture such as churches and plazas, and Filipinos in traditional garments such as the camisa and baro’t saya; Chinese influence that has resulted in the Sino-Filipino or “Chinoy” culture that shaped the Filipinos’ customs and traditions; and plantation life reflecting the local folks’ core values of hard work and perseverance. All themes explore the principles of family relationships, filial piety and social connections.

Rubio interprets archaic Filipiniana characters in their everyday setting in order to define Philippine cultural identity and its relevance in the modern world. His art profoundly explores every Filipino’s search for a sense of place.

Born in Paete, Laguna, a lakeshore town famous for its woodcarving tradition, Rubio studied at the University of Santo Tomas College of Architecture and Fine Arts where he majored in Commercial Arts.

Today, Rubio continues to be a favorite among major collectors in Asia, the United States and Canada. —CONTRIBUTED