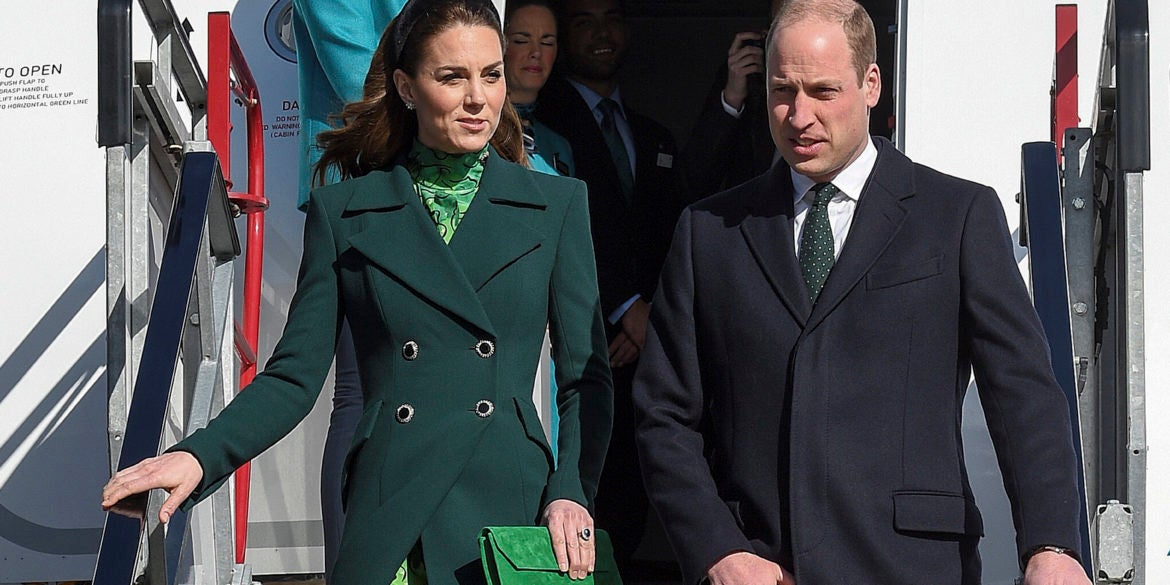 Britain's Prince William, Duke of Cambridge (R), and Catherine, Duchess of Cambridge (L), disembark as they arrive at Dublin International Airport in Dublin on March 3, 2020 at the start of a three-day visit. (Photo by Michael CHESTER / various sources / AFP)

Prince William and Kate in Ireland for three-day tour

Prince William and his wife Kate begin a tour of Ireland on Tuesday, in the latest high-profile trip by senior British royals since Queen Elizabeth II’s landmark state visit in 2011.

Their three-day trip comes just weeks after a general election which saw a surge in support for nationalists Sinn Fein, whose flagship policy is Irish reunification.

William’s grandmother is head of state in Northern Ireland. Sinn Fein was the political wing of the Irish Republican Army (IRA), which fought against British rule in the province for decades.

The couple’s visit also comes in the wake of Britain’s departure from the European Union on January 31, where the border between Northern Ireland and the Republic was a major issue.

On Tuesday, William and Kate — who officially hold the titles of the Duke and Duchess of Cambridge — were due to meet Ireland’s President Michael D. Higgins and Prime Minister Leo Varadkar in Dublin.

They will also lay a wreath at the Garden of Remembrance which commemorates those who died fighting for Irish independence — mostly at the hands of the British.

The visit — made at the request of the Foreign Office in London and the couple’s first to Ireland — will also see them travel to Galway, on the country’s west coast.

The whole island of Ireland was under British rule until a bloody war for independence between crown forces and Irish republicans ended in 1921.

A treaty split the territory between a British-run Northern Ireland and a “free state” which went on to become the modern Irish republic.

Royal visits were once impossible because of the terror threat from groups such as the IRA.

In 1979, the paramilitaries assassinated William’s great-great uncle Louis Mountbatten, the last viceroy of British-ruled India, who had been a mentor to his father Prince Charles.

The paramilitary group began to lay down its arms in 1997, ending three decades of bloodshed known as “The Troubles” and pledging to campaign for unification through peaceful means.

That allowed the queen to make a state visit in 2011, which was the first by a British monarch in what is now the Republic of Ireland since her grandfather king George V a century earlier.

It was hailed as a pivotal moment in healing historic unease between the two deeply-entwined nations.

Heir to the throne Prince Charles and his wife, Camilla, have made five visits to Ireland in the last five years in a sign of closer Anglo-Irish relations.

William and Kate’s visit is also significant because it comes at a unique time in Irish politics after Sinn Fein became the second-largest party in elections last month.

None of the parties in Ireland won enough seats to form a majority government, and inter-party negotiations have stalled.

But Sinn Fein leader Mary Lou McDonald has said she “may well be the next taoiseach (prime minister)”.

If that happens, it would likely rekindle a constitutional battle over Northern Ireland as Sinn Fein wants a referendum on Irish unification to be held within five years.

A separate border poll in Northern Ireland would also be required for it to happen, according to the terms of the 1998 peace accord.

Having resigned following a stinging defeat which saw his centre-right Fine Gael party slip to third place, Varadkar will be meeting the royal couple in a caretaker role.

Cover image: Britain’s Prince William, Duke of Cambridge (R), and Catherine, Duchess of Cambridge (L), disembark as they arrive at Dublin International Airport in Dublin on March 3, 2020 at the start of a three-day visit. (Photo by Michael CHESTER / various sources / AFP)