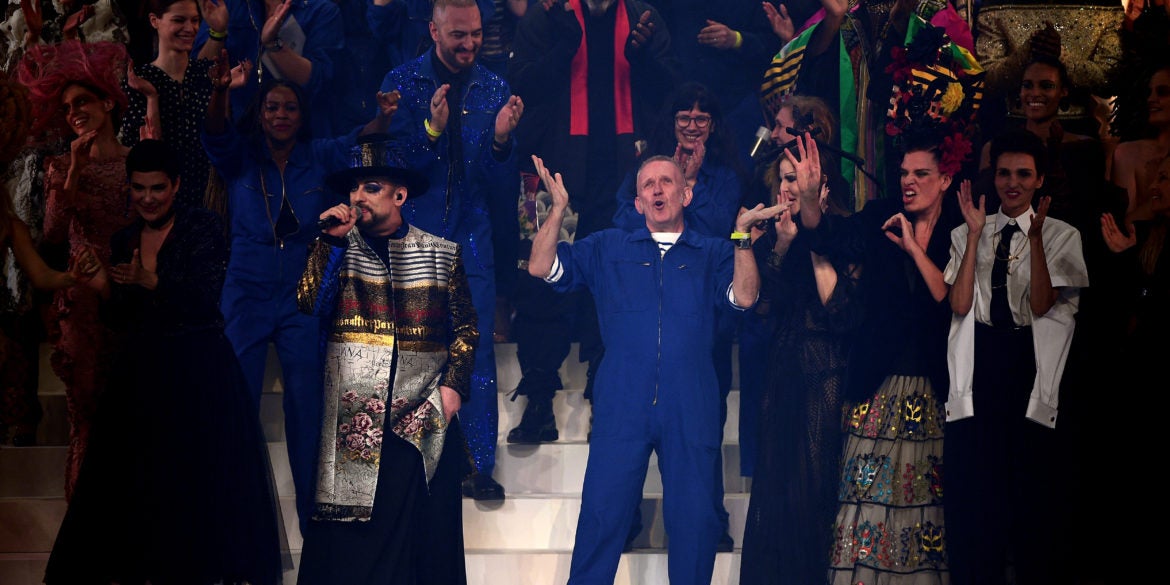 French designer Jean Paul Gaultier (C) celebrates with models as British singer Boy George (L) performs at the end of his Women's Spring-Summer 2020 Haute Couture collection fashion show in Paris, on January 22, 2020. - Legendary French designer Jean-Paul Gaultier is set to retire from fashion after a typically spectacular show in Paris on January 22, 2020. The maverick creator stunned fans on January 17, by announcing that the haute couture show in a theatre in the French capital would be his last. (Photo by Anne-Christine POUJOULAT / AFP)

Legendary French designer Jean-Paul Gaultier may have hung up his scissors, but his fashion house will live on under an ever-changing carousel of guest designers, he said Wednesday.

The flamboyant creator — who bowed out last month after half a century at the top of the fashion tree with a musical spectacular in Paris — said a guest designer will be given the keys to his haute couture studio every season.

“I have the pleasure to announce the new concept for my Haute Couture,” 67-year-old Gaultier said.

“Each season, I will invite a designer to interpret the codes of the House and I am doubly pleased that Chitose Abe of Sacai will be the first one.”

The two were photographed together on the roof of Gaultier’s Paris headquarters in the famous blue overalls he and his collaborators wear.

Abe will show her take on great provocateur’s legacy during the Paris haute couture week in July.

“I have long admired Jean-Paul for his originality and his uniquely subversive vision of femininity,” she said.

The 48-year-old is one of the most admired Japanese designers, counting Vogue supremo Anna Wintour and the doyenne of fashion critics, Suzi Menkes, among her fans.

She was also one of the very rare rivals that the late Karl Lagerfeld showered praise upon, calling her “one of the most interesting designers working today.”

Abe’s genius is in her unique cut and in recutting and splicing clothing together, “creating a sum that is greater than its parts”.

She trained with Rei Kawakubo at Comme des Garcons in Tokyo and worked with Junya Watanabe before striking out on her own 20 years ago.

The Jean Paul Gaultier label shows a new collection twice a year during Paris haute couture week, the elite club that is regarded as the creme de la creme of fashion.