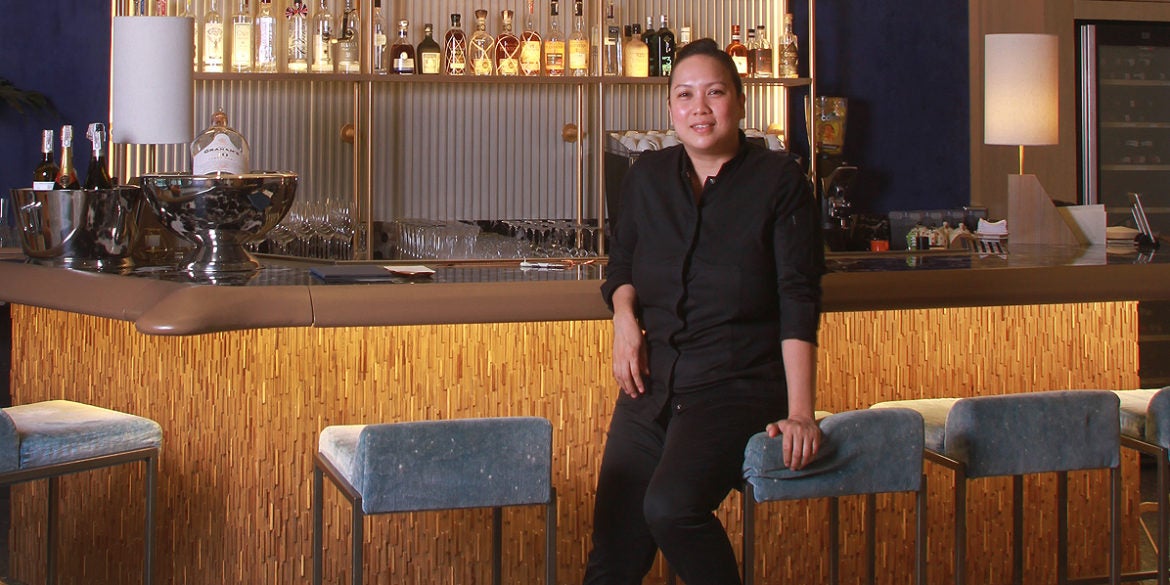 “Never say never again,” declared 52-year-old restaurateur Elbert Cuenca, when asked if he had plans for yet another restaurant. “If an opportunity comes—the right idea and space—and all the elements are there, why not? For now I don’t plan.”Such attitude may explain the success story of Metronome, the chic restaurant which made haute cuisine more relatable and affordable by melding bistro concepts, gastronomy techniques, and Asian ingredients.

Cuenca earned his reputation from his namesake restaurants that became successful for their innovations.

His restaurants follow a template: a single concept, warm and inviting interiors, seamless service, quality ingredients, and no marketing fanfare.Elbert’s Steak Room specializes in juicy steaks that are served in a discreet location, the Sagittarius building in Salcedo Village, Makati. In the same venue, Elbert’s Riedel Room, a whiskey/single malt/cigar bar, caters to an indulgent market.

Elbert Pizzeria is popular for the Napoli-style pizza baked in a wood-fired oven.

“Focus is the key,” said Cuenca. “With focus comes expertise. You can’t help but be good at something if that’s the only thing that you do.”

None of his namesake restaurants opened with media hype. He built his customers tapping his network of friends.

When Cuenca launched Steak Room in 2007, his first customers were clients from his private Mac tutorials. People have since learned about his restaurants by word of mouth.

Cuenca met Camille Consuelo “Miko” Stehmeier Calo through her cousin. The Paris-trained chef broached him the idea of a restaurant that modernizes traditional specialties and adopting local ingredients.

Cuenca then got a tip from a friend about a vacated restaurant space at the Grand Midori Hotel in Legazpi Village, Makati. He brought Calo there. It had a 100-square-meter air-conditioned kitchen with state-of-the-art equipment and a separate room for pastry making. While a pastry room is the standard in hotels, most restaurants in Manila don’t have one.

A separate company, Metronome French Restaurant Inc., was formed—of which Cuenca is president and CEO.

Unlike in his other businesses where he has complete control, he shares the leadership with his partners—retired hotelier and oenophile Alain Borgers and marketing consultant Ramon Jose Galang. Nobody interferes with Calo on the menu.

“As a business owner, the smartest thing is to partner with people who know things you don’t—and then give them a reason to care,” said Cuenca. “We take turns in running the business. I’m the balance between the grand, international standards of Alain and the fresh and bold approaches of my younger partners who are in touch with trends.”

As in his other restaurants, Cuenca hired architect Noel Bernardo for Metronome.

Bernardo furnished the interiors with plush materials and finishes that help customers relax. The décor evokes Filipiniana in its sawali or native mat-weave patterns on the wall. Bernardo said woven patterns soften the contemporary lines.

A fan of the late tech magnate and visionary Steve Jobs, who disdained fan noise and removed it from Apple III so that the computer could operate quietly, Cuenca said, “Noise is stress.” So Metronome is decked with carpets and sound-absorbent upholstery materials to suppress noise. The uneven heights of the ceiling help reduce noise.

“Metronome is one of the quietest restaurants,” said Cuenca.

Unlike his other ventures, Metronome generated a lot of buzz among friends and media even before it could open last year. People were curious about the culinary expertise of the Paris-educated chef.

Calo said she worked for the late celebrity chef Joel Robuchon, who held the world record of 32 Michelin stars. His legacy was to update traditional French cuisine by eschewing its excesses, keeping the flavors at a minimum, and ensuring that the tastes of the ingredients were recognizable.

Calo said she was bringing into the country the experience of bistronomy, a trend in France in which young chefs step away from the grand maisons and the big Michelin-star places. They open their own casual but elegant restaurants that serve modern cuisine using foreign ingredients, but at pocket-friendly prices.

“In France,” she said, “they’re obsessed with coriander, coconut and the curries from Thailand and ingredients from other countries. These well-traveled chefs are trying to assimilate them in their cooking.”

At Metronome, the customer will pay a flat P2,800 (inclusive of government taxes and service charge) for seared wagyu sirloin with miso-glazed eggplant; P1,400 for duck magret with carrot-ginger purée; and P380 for lapu-lapu steamed in a griddle with coco-coriander cream.

“The Filipino in me comes out subtly in the garnishes and the flavors,” said Calo. “There’s a connection between the menu and my personal experiences, the way I grew up exposed to certain foods.”

Spending her childhood in Butuan City, the former capital of Agusan del Norte, Calo recalled the kabayawa, the local lime which was used in sauces and as dressing for fish and salads. She used the kabayawa for the fresh scallop carpaccio with lemon vinaigrette.

The pan-seared quail with foie gras sauce is Calo’s nod to her mentor in the way it is cut and cooked. She said she melds local flavors such as soy sauce and tamarind glaze, and garnishes dishes with Chinese broccoli tossed in Dijon mustard and butter.

The pork belly confit is prepared the French way but is complemented with roasted papaya purée and ginger-barbecue sauce.

The spaghettini with prawn beurre monté was inspired by her uncle’s pancit langlang from Pampanga or luglug in Tagalog. While the traditional recipe uses shrimp head and pork for stock, Calo made a stock out of the sautéed prawn heads, flambéed with cognac, and mixed with butter and topped with salmon roe.

The buttery and delicate flavor of the pan-seared foie gras is in contrast to the tangy but sweet taste of chutney made from local tamarillo fruit.

Each item on the menu highlights a main ingredient while its adjuncts merely enhance its flavor.

Calo transformed a simple egg recipe into a great experience. She cooks the egg at 64 degrees, where the egg yolk starts to clot until it is thick and velvety. The pleasure comes from the richness of the egg and augmented by the mushroom sauce with truffle and crispy wrappers on top.

“I like the approach where you can taste nuances of flavor—not just leave it to one flavor profile,” said Calo. “There’s a discipline in putting things together wherein you don’t overseason, or you don’t put too many things on the plate.”

Among the desserts, Chocolate Textures banners Philippine nationalism. Dark chocolate fudge is slathered with milk chocolate foam like mousse and pierced with shards of slated cacao crisps on top. Its selling point is the use of three local cacao beans from Mindanao, made by three artisanal brands.

“The dessert is the exclamation point of a meal,” said Calo. “That’s why it is important to have a pastry chef. It’s something that’s quite rare in restaurants here.” —CONTRIBUTED