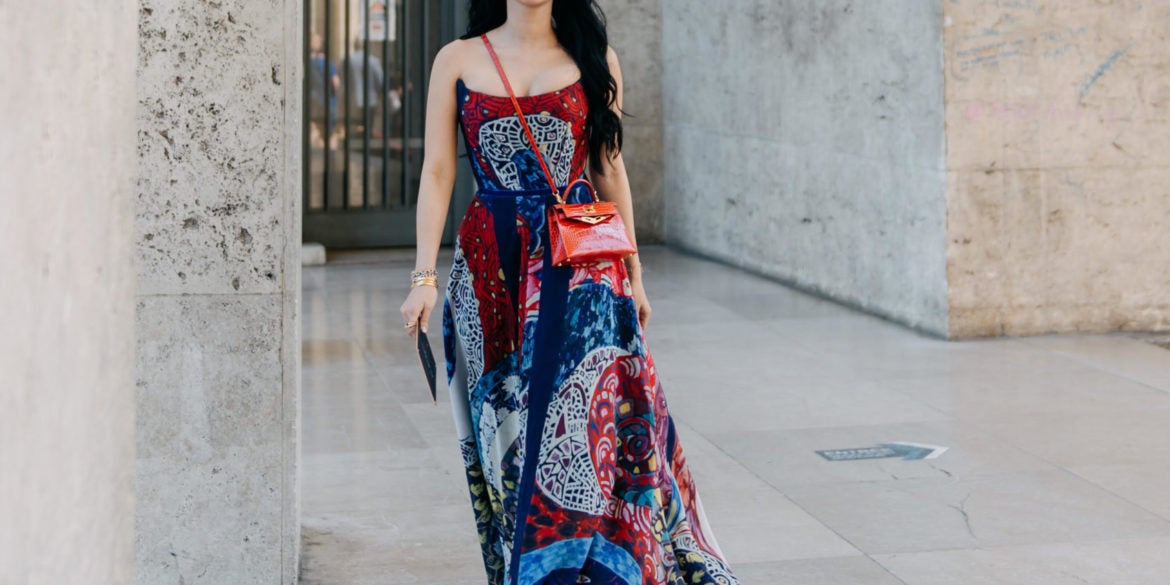 ‘It is about the enjoyment of being a girl’—Cristina Roque

During Paris Fashion Week last July, actress/artist/influencer Heart Evangelista got her Instagram followers excited when she wore a custom-printed, strapless long dress with a pair of sneakers. Since 2018, homegrown fashion brand Kamiseta has been printing her paintings on fabrics and making dresses and scarves out of them. For this long dress, designer Paul “Popo” Go used three chiffon scarves with the actress’ characteristic flamboyant paintings.

The casual couture concept came about in Paris Couture Week in 2017 when designers presented formal wear that resembled off-the-rack and whimsical long dresses anchored on exquisite fabrics and workmanship. It was their way of reaching out to a younger market who wanted simpler and fun designs.

As Kamiseta turns 26, Roque says the brand is growing stronger with 80 stores despite competition from imported high-street brands. The offshoots of its success are an aesthetic clinic and a boutique hotel.

On March 20 at Peninsula Manila, Kamiseta will launch a collection and celebrate yet another year of partnership with Evangelista who signs her name Love Marie in her artworks.

Titled “Kamiseta x Love Marie,” the event will present four designers who will use fabrics with the brand ambassador’s paintings, a live orchestra and a fantasy setting at The Lobby by events stylist Gideon Hermosa.

Back in the aughts, Kamiseta used Hollywood endorsers such as Kate Hudson and Natalie Portman to promote a global image. In the 2000s, the nationalistic sentiment in fashion drove the brand to revert to local endorsers. Kris Aquino and Gretchen Barretto helped in boosting sales.

Kamiseta’s global image today is evident in the high profile of its current brand ambassador. Evangelista is part of Vogue 100, a list of creatives curated by editor in chief Anna Wintour.

The painter’s subjects of faces, stars, oceans and lace patterns are imprinted on fabrics under LM x Kamiseta label. Women, who wore Kamiseta’s clothes with the artist’s designs, proudly posted them in Instagram.

Quiñones’ designs are characterized by puffed volumes, drapery and tiered ruffles. Some of the dresses will be fused with Evangelista’s prints, embellished with crystals and beadwork, while others are bright solid colors with velvet ribbons. Made of chiffon, silk satin, silk brocade and silk taffeta, his clothes will be produced in limited quantities priced between P10,000 and P30,000.

“His designs are feminine and edgy,” says Roque. She noted that the designer adhered to Kamiseta’s DNA of eye-catching colors and vivid prints. “There are less neutrals and shades. Filipinos don’t want to wear something that looks like their skin tone. Blacks don’t sell in our stores. They want vibrant colors, not sad ones. Kamiseta is about the enjoyment of being a girl. Hence, the colors need a positive vibe.”

Quiñones explains that the pocket collection was his experiment for Kamiseta. “It’s been known for fashionable basics and preppie styles. Cris wanted something unique to offer. Since her friends dress up a lot, she wanted to marry ready-to-wear with couture,” says Quiñones. Quiñones’ aesthetics emphasizes volume. “You don’t have to wear tight-fitting clothes to look sexy. It’s all about confidence—the way you carry yourself. You can be sexy through your expressive eyes,” he says.

The 40-year-old designer began his fashion career working for such mentors as Dennis Lustico, who taught him restrained elegance, Lulu Tan-Gan for technical skills, Bergamo for tailoring and Patrice Ramos for the mix of fabrics.

He migrated to Los Angeles in 2013 and initially took odd jobs, such as office work and styling for indie films.

The owner of bridal wear boutique Coco Melody, an old friend, asked him to be her creative director. This stint honed his techniques in creating silhouettes, understanding the fall of each fabric, finishing and in-seams. It gave a reality check that fashion is business.

“When I make I dress, I think of wearability, pricing and saleability. Comfort is an important consideration in the design. If your design is avant-garde and the wearer can’t move, then it won’t move in the sales,” he says.

Quiñones realized that the creative vision for a collection begins with an understanding of the target market. “I learned to incorporate the style, colors and price points according to their preferences. Every state will have differences of preferences in colors, silhouettes and prices. If you don’t understand the business, you will fail,” he says.

Aside from Coco Melody, he established his namesake fashion house, Puey Quiñones/ Los Angeles, which is run by his French husband, Paul Martineau. It specializes in formal wear, priced at $2,000 to $10,000. The designer explains that the hefty price is due to the labor costs. His pattern maker/ master cutter used to work for Carolina Herrera. The beadwork is executed in India.

Roque also wanted to promote the new generation of designers she admired for their workmanship.

Go studied fashion design at the Fashion Institute of the Philippines and has been in the industry for 17 years. He has become Evangelista’s go-to designer and has made clothes for other celebrities such as Anne Curtis, Pia Wurtzbach, Marian Rivera and Kim Chiu. His designs will make use of the artist’s signature stars and nature patterns.

Mark Tamayo, an alumnus of SoFA Design Institute, will highlight his tailoring in a 20-piece collection. He will mix local materials such as piña and cocoon silk with the Love Marie paintings printed on silk charmeuse.

Ultimately, Roque envisioned that Kamiseta’s casual couture will appeal to women who want dressy but versatile garments. A change of footwear or accessory can take the dress from a conference to a wedding.

“You don’t have to wait for a special occasion to wear these clothes,” says Roque.—CONTRIBUTED