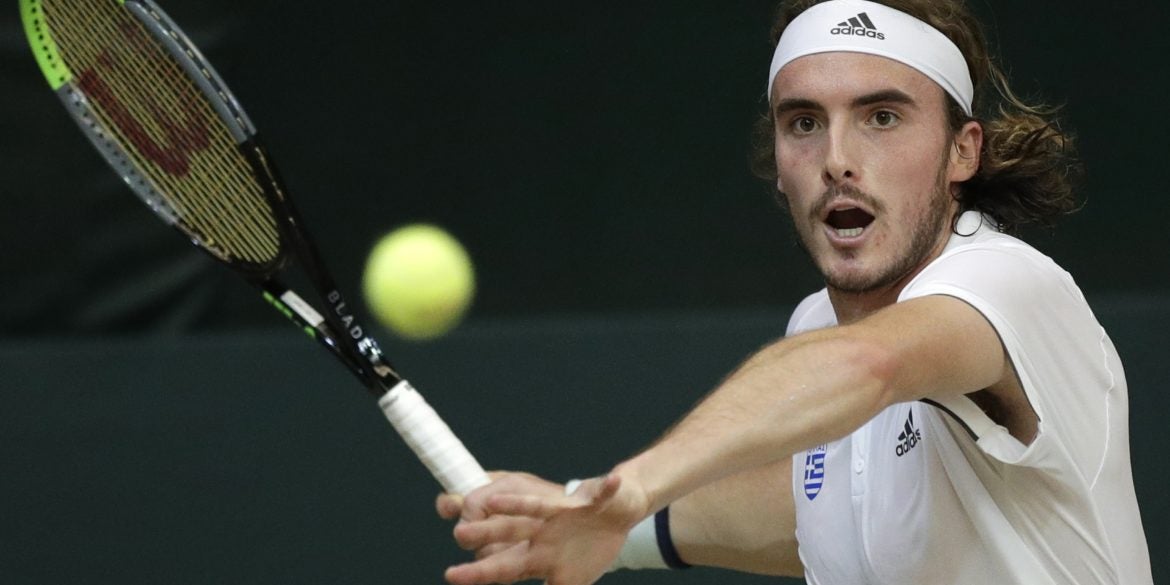 It’s hard to miss Stefanos Tsitsipas in the crowd, towering at 6’4” with soft blonde curls resting just above his lean shoulders.

Under the hot Manila sun, the World No. 6 tennis player was having a plastic cup of taho from a vendor who passed by in front of the Philippine Columbian Association (PCA) in Paco, Manila. It’s next to a busy flyover construction where traffic is at a standstill. It’s something that would thrill any tennis fan.

But who is Stefanos Tsitsipas again?

He’s one of tennis’ “Generation Next,” one of sports’ solid contenders for the throne long held by the likes of Roger Federer, Novak Djokovic and Rafael Nadal.

In fact, the past two years saw him beating all three of them in the ATP (Association of Tennis Professionals) Tour en route to winning five titles and becoming the youngest member of the World Top 10.

“I had a soy yogurt, yeah right out there, it reminds me of honey,” Tsitsipas said.

“Last night, I went out in the streets and people are so humble,” he added. “I really like to see them. It’s really inspiring to see people who treat us very well; very generous people; very captivating experience.”

Quite clear he was enjoying his stay.

It’s a welcome surprise considering that a few Filipino tennis officials were even expecting him to skip the World Group 2 tie against the Philippines over the weekend.

They felt he’s got “more to lose” showing up in a matchup the Greek team could handily win even without him.

“It was his decision to be in the team for Greece, he loves it,” said his father, Apostoles Tsitsipas. “He loves his country, he loves the culture which I believe is the way it’s supposed to be.”

The elder Tsitsipas introduced Stefanos to tennis when he was 3. He was in the news early last month when his son accidentally hit him with a racket swung in disgust over a lost set.

Right there and then, anyone can tell that Tsitsipas’ explosive baseline game comes with a temperament that is prone to emotional outburst.

Yet deep inside, it’s obvious that there’s a wide-eyed wanderer hiding somewhere.

“I don’t think he knows he’s already a big name player that he already is,” said the Philippines’ head coach Chris Cuarto.

That explains the delay it takes for him to get to the court from the dressing room as he obliged just about everyone trying to get a selfie taken with him.

“It’s really exciting that playing in Davis Cup makes you travel places,” said Tsitsipas. “I don’t think I will ever visit the Philippines if not for Davis Cup.”

A 28-strong SWAT team, complete with long firearms and battle gear, was deployed to escort the Greek team.

“When they (Greece team) are already in the hotel, they (SWAT) also leave. The problem is we have to always be ready because Stefanos is very accommodating to everyone,” said Tom Falcis, who acted as the visitors’ liaison.

Tsitsipas was even willing to absolve the PCA shell/clay courts, notorious for poor ventilation and slow, treacherous surface.

“Yeah sure, it’s different. I grew up playing on clay. I guess you can consider that clay courts,” he said.

Tsitsipas added: “Davis Cup means a lot to me and transported me into a world team player and maybe achieve more in a way as a good ambassador for my country.”

Well by all accounts, he’s doing a great job. On and off the courts.