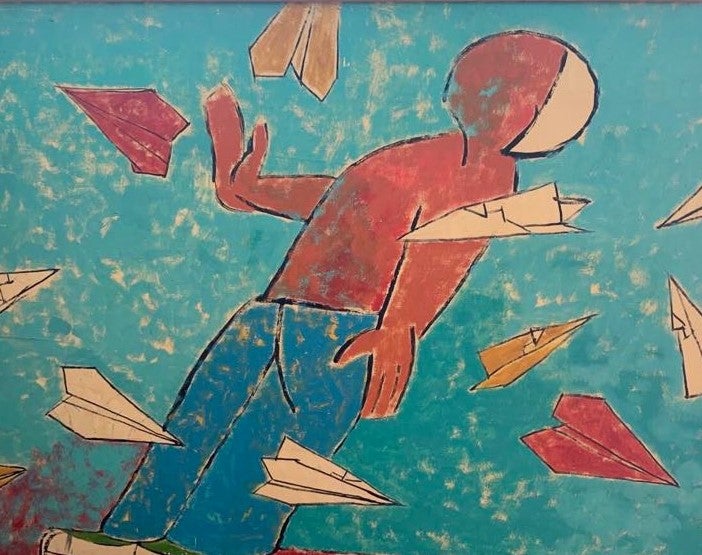 Deviating from his classic Cubist-inflected subjects of cockfighters, street vendors, and Mother and Child, all rendered in fragmented planes of light, Angelito Antonio, one of the masters of Modernism, casts an astute, observant eye on subjects that are often ignored for their seeming artlessness and lack of drama.

Among these are a shoemaker, a man playing with paper planes, a reverent nun, a hired gun cloaked in bush jacket and baseball cap, an ensaymada merienda and lapidas or tombstones.

An art lover once viewed this unexpected collection of surprising images and hence admiringly pronounced them as Antonio’s “poetry”—in perfect counterpoint, he said, to the artist’s “prose,” which are his staple subjects.

The new works are shown in “The Poetry of Angelito Antonio,” a nonselling exhibit, at Edsa Shangri-La Plaza, East Wing, Luxury Lane.

The poetry in the paintings are more along the spirit of Pablo Neruda’s “Odes to Common Things”: “I have a crazy, crazy love of things. I like pliers and scissors. I love cups, rings and bowls. Not to speak of course of hats. I love all things.”

Now an octogenarian, the still artistically youthful painter, now affectionately addressed as “Mang Lito”—with well over five decades of works behind him—continues to marvel at the wondrous world around him, even as we in turn marvel at the jubilantly chromatic masterpieces that emanate from his palette and brush.

Antonio was heavily influenced by Vicente Manansala, his mentor at the University of Santo Tomas.

He related to Manansala’s staple of subjects: the classic Mother and Child, sabungeros or cockfighters, processions, street vendors and peddlers of various goods and wares: candles, fruits, vegetables and fish; kites and balloons; kitchen and market scenes; fiestas and processions and other familiar folk urban images. Such themes encompassed the entire concept of Filipino-ness. Collectively, they are a sumptuous feast, a joyous journey into the exuberant soul of the irrepressible Pinoy.

Picasso and Matisse exhorted young starting artists to assimilate into their work their favored influences, for it is only in confronting these influences that they can find their own identity. (Alas, most Filipino artists are in denial mode, misconstruing “influence” for imitation!)

It is in this context that Antonio had proven his mettle. He might have subsumed the subject matter of Manansala, but he has seized on Manansala’s so-called “transparent Cubism” and, in a manner of speaking, overruled it. How? By the sheer introduction of a sharper, more angular, more calculated rendition, creating a more palpable, more visible tension between figuration and abstraction.

Moreover, Antonio has even journeyed out into a more adventurous and daring sense of colorism which did not even occur to Manansala. Antonio sublimated the lyrical tenderness of his mentor—so evident in his Mother and Child works—in favor of a brisk and bristling, even brusque, handling of form, deliberately so.

As an emerging artist in the 1960s, Antonio emerged at the forefront of what would be labeled as Urban Folk Genre art, which included Antonio Austria and Mario Parial, not surprisingly also educated at the Pontifical University.

But Antonio has also been harboring the desire to deviate from his standard repertory of images.

Ever observant, ever on the lookout for the intriguing image, Antonio lit on objects and persons, things, often unnoticed, out of people’s radar, dismissed and disposable. American critic Arthur Danto called it the transformation of the commonplace.

For, in Antonio’s estimation, what could be more common and ignorable, more mute and stupefyingly enigmatic, than some of the subjects he has seen fit to depict and portray: a lame boy with a bird perched on hand, a pious nun, an ensaymada on a plate, capiz windows, a sapatero and a serial side-view of variously designed shoes, a top shot of a large round table, lapidas or tombstones, a table-football game, an incognito hitman, a vain woman admiring her manicured hands and painted fingernails, carnival characters and other such seemingly lackluster images.

Just exactly what is happening in these images? What is the sense of it?

Amazingly, they trigger narratives in our minds, impelling a second, closer look. For alas, we all look without ever seeing. But Antonio sees beneath the commonplace–transforming it into a personal paean.

Antonio has, for decades, concealed these works, only sharing them with a few intimates such as Hernandez. He has kept sheaves of papers where he has sketched, like jottings in a private journal, images that may someday see the light of day: an amputee, a man with a TV antenna (Go ask: What for?), a fire-eater, a pole dancer, a backyard gymnast, a Lacoste shirt with its iconic crocodile patch, a man with a backpack from which dangle a bird (Go wonder: But why?) and a Rubik’s Cube (Say that again?!).

Antonio disconnects these nonsensical subjects and objects from their prosaic place in life, and admits them into a poetic realm. Surprisingly, they are shot through with humor and wit, touchingly and starkly real. —CONTRIBUTED INQ“The Poetry of Angelito

Antonio” is running at Edsa Shangri-La Plaza, East Wing until March 15. It is organized by Art Circle, with the support of Ruel Canobas.