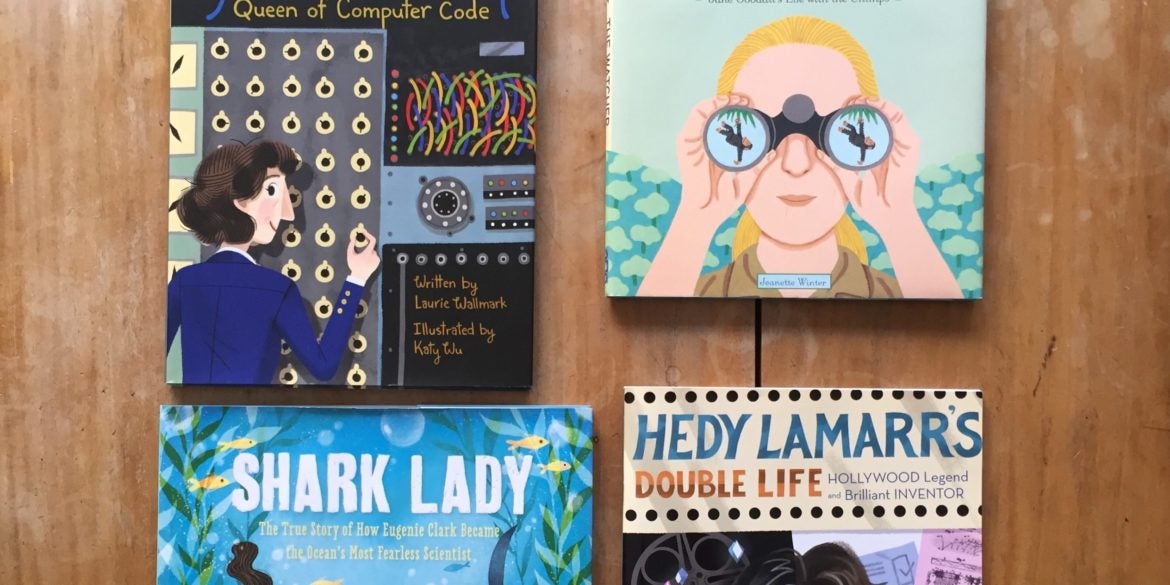 Get these books for your sons and daughters.

Despite inheriting a chestful of princess gowns, my 4-year-old daughter Juno hasn’t really taken a liking to them or to any similar tropes.

She did wonder why a classmate rode the school shuttle. I said maybe both her parents worked and that I rode the bus when I was young, too. She answered, “Huh? Moms don’t work!” You can imagine the illuminating lecture she had as I drove her home from school.

On my mother-in-law’s last visit to the United States, she asked what we wanted brought back home. Our requested pabili included books recommended by A Mighty Girl (www.amightygirl.com), “the world’s largest collection of books, toys and movies for smart, confident and courageous girls.”

I want to be able to read to Juno books that normalize successful female protagonists in real life.

“The Watcher: Jane Goodall’s Life with the Chimps”

Best Book of the Year by the Boston Globe, Kirkus Reviews, Booklist and the Bank Street College of Education, “The Watcher” is about how English primatologist and anthropologist Jane Goodall got to work with chimpanzees and set up the world’s longest-running continuous wildlife research project. The beautifully illustrated book follows Goodall from her childhood in London to her years in Africa, and to her global campaign to save chimpanzees from extinction.

Both my kids are fascinated with animals, and so were thrilled to see how Goodall’s curiosity matched theirs. Her patient observation, though, has yet to rub off on them. But I hope that this story of “a brave woman who wasn’t afraid to do something that had never been done before,” as the author and illustrator Jeanette Winter put it, gives my kids the mindset of possibilities.

“Shark Lady: The True Story of How Eugenie Clark Became the Ocean’s Most Fearless Scientist”

An Amazon Best Book of the Month, Best Children’s Book of 2017 by Parents magazine and one of New York Times’ 12 Books for Feminist Boys and Girls, “Shark Lady” is “about a woman who dared to dive, defy and inspire.”

Eugenie Clark wanted people to see sharks not as ugly, scary monsters but as the beautiful, graceful creatures she saw them to be. But along with that challenge was changing how people thought about women scientists.

Prove them wrong she did. She even unearthed new species of sea creatures. Clark educated everyone with her discoveries about sharks, and proved that if a girl has set her mind on doing something, she can do it no matter what other people may say.

“As she grew older, many were still telling Eugenie what to do. Forget those sharks. Be a secretary! Be a housewife! Even after she earned her degree, many still doubted her.”

My son Jack, 9, has always been captivated by sharks, and his little sister has imbibed his interests. I like how the book is just as unafraid as Eugenie to spread the messages of hard work, looking beyond the surface, and protecting species different from us.

“If you’ve got a good idea, and you know it’s going to work, go ahead and do it.”

From the time Grace Hopper was a girl, she “wanted to understand how things worked so she could make them better.” At 7, she discovered how clocks work, and built an elevator for her dollhouse.

Pioneer programmer Hopper created the term “computer bug,” trained computers to “speak English,” and developed a faster way to code. Another inspiring, trailblazing female who revolutionized computer science, Hopper did many things no one had ever done before: “Humans are allergic to change. They like to say, ‘We’ve always done it this way.’ I try to fight that.”

STEM (science, technology, engineering and mathematics) girls and boys like my kids have a role model in Hopper, and I was glad to have learned about all her incredible accomplishments. More than that, I like how the story included how she overcame her failures, and stressed how her achievements came not only from her logic but also from her intuition.

Available on Amazon. You can also watch the read-along on YouTube. Ages 5–up.

Movie star by day, inventor by night. This is the story of Hedy Lamarr, regarded as the most beautiful woman in the world. It outlined her childhood in Austria and how her career took off but also her life behind closed doors as inventor of many things,

“My father had encouraged me by telling me to hold fast to my dream and that if I held fast it would come true,” Lamarr wrote.

During World War II, she and her friend George Antheil built a revolutionary communications system that we continue to rely on today to secure digital communications. She came across the idea for her “frequency-hopping spread spectrum” while playing the piano. It took 50 years before she was acknowledged for her contribution, to which she responded, “It’s about time.” But she wasn’t bitter: “Do good anyway. Think big anyway. Build anyway.”

This story I thought would resonate with Juno the most because it shows how she can embrace both her love for glamor and tinkering. She may not like princess gowns but she loves putting on makeup and getting her nails done as much as she does creating things from her imagination.—CONTRIBUTED INQ

Available on Amazon. Age Range: 5 and up. Grade level: Kindergarten and up.