Tony Adriano is back with modern style | Inquirer Lifestyle 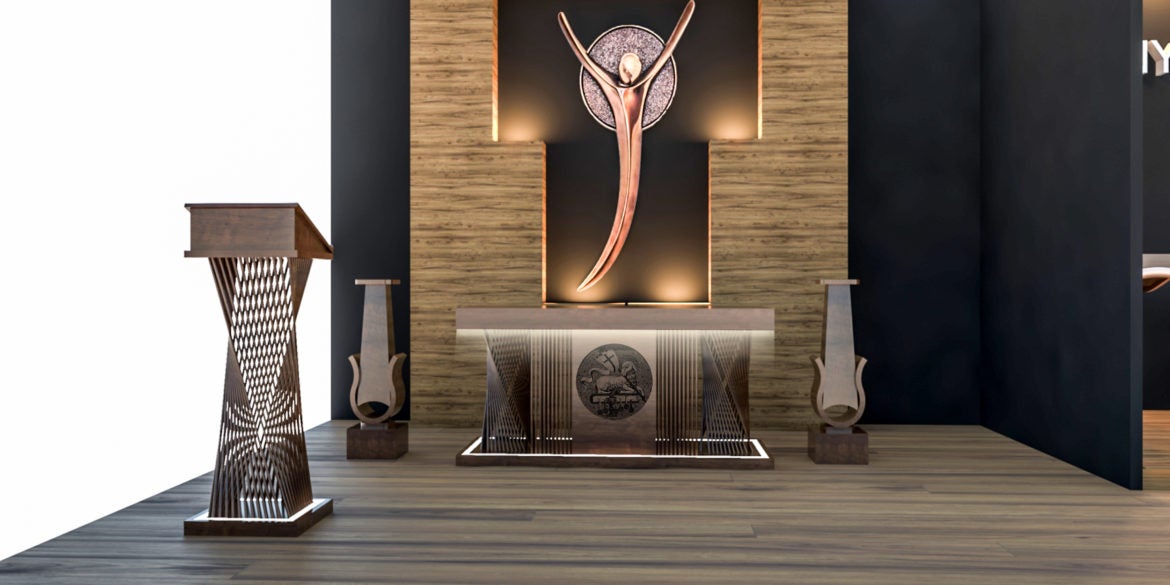 “The Sanctuary” was inspired by the Prayers of the Faithful during the Eucharistic celebration. The focal point is the abstraction of Christ looking down on the mahogany and brass altar table.

Tony Adriano is back with modern style

His trademark dark wood tones, ornate carving details and gilt finishes make for a period style. But to the younger generation perhaps, his look was musty.

Designing against stereotype, Adriano will show this time his contemporary style, in two installations, at the Worldbex Philippine World Building and Construction Exposition, March 18-21, at World Trade Center, Pasay City.

“People think that I know how to make only traditional designs. I can challenge myself. With a younger market and the rise of small condos, I am introducing innovations but with a touch of my signature classicism. My new settings will show a different Tony,” he says in an interview with Lifestyle.

Adriano has been recognized for his liturgical works, including churches and papal furniture for the papal visits of Pope Paul VI in 1970 and Pope John Paul II in 1995.

His first setting, “The Sanctuary,” depicts an artistic focal point—an abstraction of a 4-foot-tall, floating, crucified Christ made of solid wood framed in a niche. The figure looks down on the altar table made of classic mahogany with a contrasting base of modern fluid brass lines.

The wooden base is adorned with the crest of the Agnus Dei.

“Most altars are made of all-marble or all-wood. As a foremost designer in liturgical arts, I have this innovation to combine metal and wood,” says Adriano.

The curved lines on the base of the altar table suggest hands put together in prayer.

The lectern replicates the scaled-down design of the altar table, although it is embellished with the carving of the cross.

Striking a balanced symmetry, Adriano places 42-inch-tall candelabras with subtly curved bases, suggestive of the image of hands making an offering. They flank the altar table.

“In liturgical interior design, the works must be symbolic and abide by the rules of the liturgical commission,” explains Adriano.

The no-nonsense look and clean lines are au courant—a far cry from his previous altars gilded with fanciful curves of Rococo carvings and exuberant baroque designs.

The residential furniture showcase shows off Adriano’s transitional style, a combination of modernity and warm, handcrafted classicism. Titled “The Art of Furniture,” it pays homage to his birthplace in Ermita where his grandfather, Simplicio, put up the family furniture business.

Growing up in a neighborhood surrounded by Art Deco buildings, Adriano injects his designs with the bold geometry that characterized the 20th century visual style. Inspired by Art Deco, his round side table makes a statement with a high contrast of a black mahogany with gold accents.

The designer’s style DNA remains classic. The seats call to mind the Directoire, an 18th-century style that uses neoclassical elements and animal motifs. The sofa armrest is held up by columns with 22-karat gilded, elaborate capitals. The mahogany armchair is adorned with gilded, hand-carved lions and claws. Gilded horns serve as armrests in the upholstered tub chair.

Adriano notes that he designs with function in mind. “I don’t design for show. My works are comfortable enough so you can relax, and they last a lifetime,” he says.

The third-generation furniture designer acknowledges the influence of his father, Avelino. While the older Adriano catered to his era’s leading families—the McMickings, Ayalas and Zobels—he also shared his talent with the Church pro bono. Among Avelino Adriano’s biggest projects was furnishing the Archdiocese of Nuestra Señora de Guia in Ermita. He also designed furniture for the Apostolic Nunciature of the Philippines, the embassy assigned by the Holy See.

“My parents were always supportive of the Church, especially the priests, bishops and cardinals. My father made many ceremonial chairs,” he says.

Adriano often repeats his story about growing up in his father’s atelier and learning the rudiments of furniture making in the summer. After completing the Bachelor of Fine Arts, major in Interior Design, at the University of Santo Tomas, he went to Montparnasse in Paris, where his father’s friend had connections with the furniture industry. Adriano’s visits to the Paris ateliers cultivated his taste for the flamboyant European styles which would become one of his signatures.

In 1970, family friend Julio Cardinal Rosales, then archbishop of Cebu, asked Adriano, then only 20 years old, to make the papal chair for the visit of Pope Paul VI. His narra ceremonial chair with inlays of the Philippine map, with tufted upholstery and gold fringes, is on display at the Cebu Cathedral museum.

“After his visit, the Pope gave us a gold medallion of his papacy. Since then, the Church leaders have been coming to us when there was an important occasion or when furniture was needed,” Adriano recalls the growth.

Then ambassador to the Holy See Teresa Martin asked Adriano to design two sacristy vans for the visit of Pope John Paul II in 1995. Even given the Church’s limited budget, he also designed ceremonial chairs, one of which was later brought to the Vatican.

The pope’s narra throne with 22-karat gold finishes, carved papal crest and brocade upholstery, is exhibited at the Ermita church.

Adriano recalls that he considered as his reward for his works the privilege of being one of the few allowed to enter the sacristy vans and kiss the Pope’s hand.

“All our services are pro bono. I believe that the Lord helps when He is pleased with an honest heart,” he says.

He and his mother, the late Rosario Adriano, were given the Pro Ecclesia et Pontifice, the decoration of the Holy See given individuals for their unflagging support of the Church.

“If you wear the medal at the Vatican, people will salute you. It’s like being a diplomatic official,” he says.

His namesake business, Tony S. Adriano, has been sustained by powerful and affluent clientele such as Andrew Tan, Tony Tan Caktiong, Lucio Tan and Peter Cuyiuto. Then President Gloria Macapagal-Arroyo commissioned him to furnish the Malacañang’s State Room. Dr. Elenita Binay requested him to refurbish the Coconut Palace when it was the headquarters of Vice President Jejomar Binay.

Adriano clarifies that he doesn’t limit his clients to the rich and famous. “I also cater to those on a modest budget. I can work with young couples who are starting off with the basics. I can design something livable and classy without buying expensive things. Ordinary things can look expensive with the right arrangement,” he says.

“This year is the comeback of the Sleeping Dragon. I’ve awakened.” —CONTRIBUTED INQ