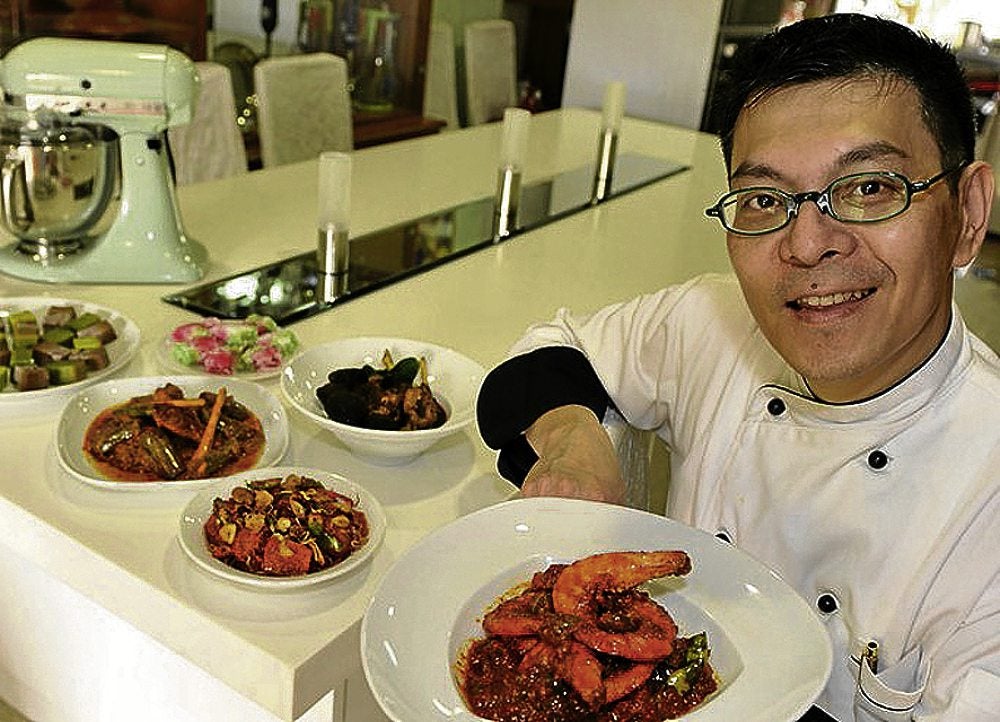 Chef Philip Chia, one of Singapore’s noted Peranakan chefs, talks about his life, his food and his culture. Peranakan means “locally born.”

“We are also known as Straits Chinese, of a colorful, unique and rich ethnic cultural heritage,” says Chia.

The first Peranakan community was said to have arisen in Malacca through intermarriage between Chinese immigrants and Southeast Asian women. “Umbok-Umbok” is another term used to refer to the Peranakans, particularly in the areas of their cuisine and dressing: the ladies, known as Nyonyas and Bibiks, wear Sarong Kebayas and Baju Panjang; and the men, known as Babas, wear Baju Lok-Chuan (mandarin collar with Chinese woven buttons and later batik shirts. Peranakans speak mainly Malay with a unique twist that uses “Hokkie” with some English. This language is commonly known as “Baba-Malay” or “Baba patois.”

“My great grandfather, Chia Hood Theam, was the comprador of Mercantile Bank. Most wealthy men during that era had two or more wives with many grandchildren who lived in one big house,” says Chia.

“My great grandmother, of Thai origin, my grandfather’s second wife, was the one who arranged the marriage of my parents, Chia Chin Seng and Lee Joo Imm. I am the youngest, si ‘bong-su’ (youngest child) of 13 children. I was later adopted by my nanny, Lim Lian Neo, a great cook and a true Peranakan. My adoptive parents doted on me very much. They loved me more than their own children.

“At age six, I started to help in the kitchen using batu lesong (pestle and mortar) to pound sambal belachan and rempahs (spices). When my adoptive sisters were not in a good mood, they would make me pound lots of spices, till it was very fine and to their satisfaction. I obeyed because in the culture I was brought up in, it was considered rude to answer an elder.

“When my beloved nanny died, I had to return to my paternal parents. My adoptive sisters couldn’t afford to take care of me. However, I didn’t have the opportunity to live with my mother who by then had passed away. There was a revival in my interest in Peranakan cooking. So I learned from Mak-ko (auntie, sisters of my father) Alice and Nellie. I had a small blue exercise book where I wrote all the recipes and practice cooking it during weekends for my family.

“In 1977, I took part in a cooking competition. My entry was ‘Ayam Pedas Siam’ (Spicy Chicken with Thai Influence), a recipe passed down to my grandmother, Yeo Hoe Neo, first wife of Dr. Chia Keng Hoe, a prominent doctor in Katong and Chinatown in the early 20th century. While I was cooking, an elderly gentleman, Lee Eng Liang, approached to ask who my parents and grandparents were. He was surprised to learn that I was the grandson of Dr. Chia Keng Hoe.

“He later invited me to visit Katong Antique House. Soon after, I found myself connected to many people. Lee Kip Lee at that time was the president of the Peranakan Association. He said to me, “I am your uncle, your mother’s first cousin. Come and join us in the association.”

Over 30 years later, Chia is now one of Singapore’s top Peranakan chefs. He believes that “someday Peranakan cuisine will achieve international culinary standards and will be the icon for Singapore.” When asked what the secrets to cooking good Peranakan cuisine are, he said, “Be generous with the spices and fry till fragrant enough.”

600 g fresh medium-sized prawns, clean but do not peel.

Add sliced onions, mix well for about a minute.

Return prawns into the wok and mix well.

Turn off flame and serve.

Thanks to our mutual friend Ding Mercado for making this interview possible!

My book, “Kitchen Rescue 3, The Directory—My Lifeline to Eating, Cooking and Living,” is now available at all leading bookstores. Call 6474744.