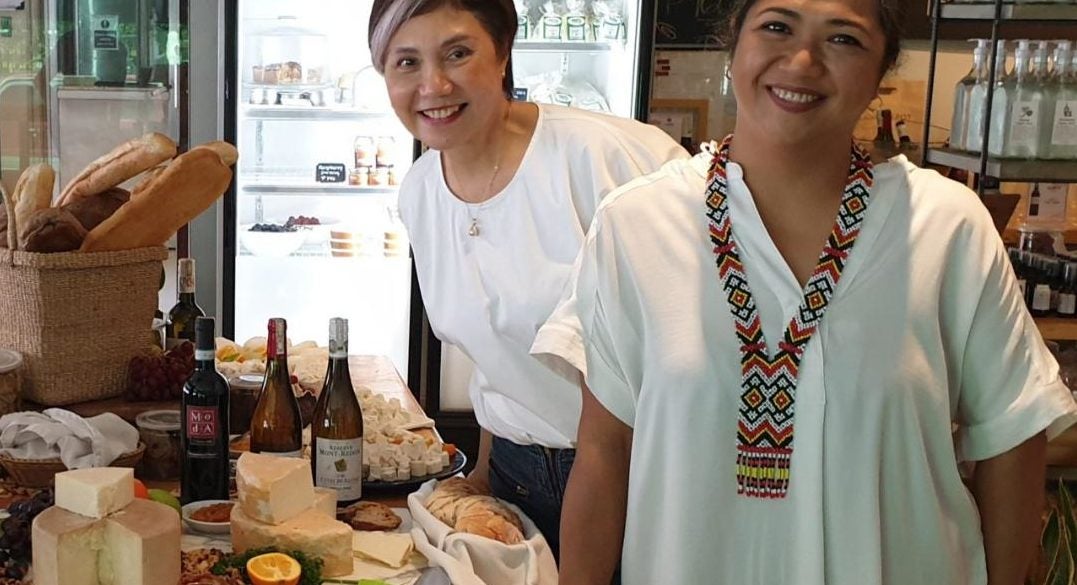 Every once in a while, Olive Puentespina, the Davao-based cheese maker whose products are branded as Malagos, visits Metro Manila. She was at Cheese Club events, for instance, where her products had been chosen as “cheese of the month” by the club members. She shows up at art exhibits which feature locally made artisanal products.

When in Davao, we make it a point to taste Olive’s cheeses at her Davao City outlet, where orchids are also on sale. But we have also lamented that there is no place back home in Manila where we can do the same cheese tasting with friends, except if we ourselves organize something like it at someone’s home or restaurant.

But how wonderful now that we can buy and taste Malagos cheese at Tilde Café, Ginny de Guzman’s restaurant and bakery on Matilde Street in Poblacion, Makati (tel. 88712764). This was announced one afternoon with Puentespina present, along with her marketing manager, Karin Carmona, cheese lovers and food writers. There was wine pairing provided by Wine Depot, both red and white to complement the cheeses.

Every time Puentespina talks about her cheeses, she always has new ones to offer. She introduces them with authority and enthusiasm. After all, she has been producing cheese for the past 10 years.

But she rattles them off as if we, amateur cheese lovers, know what she’s referring to when she says that the Capriccio is a “washed rind goat’s milk cheese” and which has an “affinage of three months.” Affinage is a good term to know when discussing cheese because the French word means the process of aging.

Two cheeses, for instance, become creamy as they age, but are firm while young. These are the rose-colored Capriccio and the La Regina.

But the first thing Puentespina discusses at Tilde is her version of the Filipino local cheese, kesong puti. The soft cheese is made with cow’s milk instead of carabao’s, and which she made less salty.

Borracho is the name of Puentespina’s goat cheese. Having encountered the Spanish word years ago, we kept it in mind because it means “drunkard.” The goat cheese is washed for three months in dark beer (Cerveza Negra). Most of the guests who tasted the cheese did so with a giggle. Was it because of the beer, or the idea of a drunken cheese?

The Blue Goat Cheese has the attractive blue veins that has the special flavor of good mold. We let it crumble on Tilde’s slice of good sourdough bread.The Sophia is a soft goat cheese with a marinade of olive oil and garlic. There are two other cheeses made from goat’s and cow’s milk. One is Pineapple Sublime, and the other, Pesto Sublime.

Many of us want to stay on, since it’s a Friday, and going home amid heavy traffic isn’t as encouraging as staying put at Tilde, enjoying cheese, wine, and the company of friends.

While Malagos cheeses are available at Tilde, the products will also be showcased on Filipino Food Month in April. This is the April 25 event of the Food Writers Association’s Toques and Texts, dubbed ”Ala Eh,” a merienda potluck of Batangas cuisine at Palm Grove in Rockwell. It’s a fund-raising event for the province after the Taal volcano eruption.

Many people don’t know that Puentespina is from Batangas and that she still speaks with the Batangueño punto (accent). She promises to create a Batangas-inspired cheese and will also serve a guava preserve.

The other chefs who will create their own Batangas-inspired food are Robby Goco, Ginny de Guzman, Nina Daza Puyat and Myrna Segismundo—all of whose families are from the province. The menu will be announced later. There are limited seats to this event, each seat is P1,500. INQFor reservations, contact Dane at 0956-9940160, Lani at 0997-6836566, 88954040.