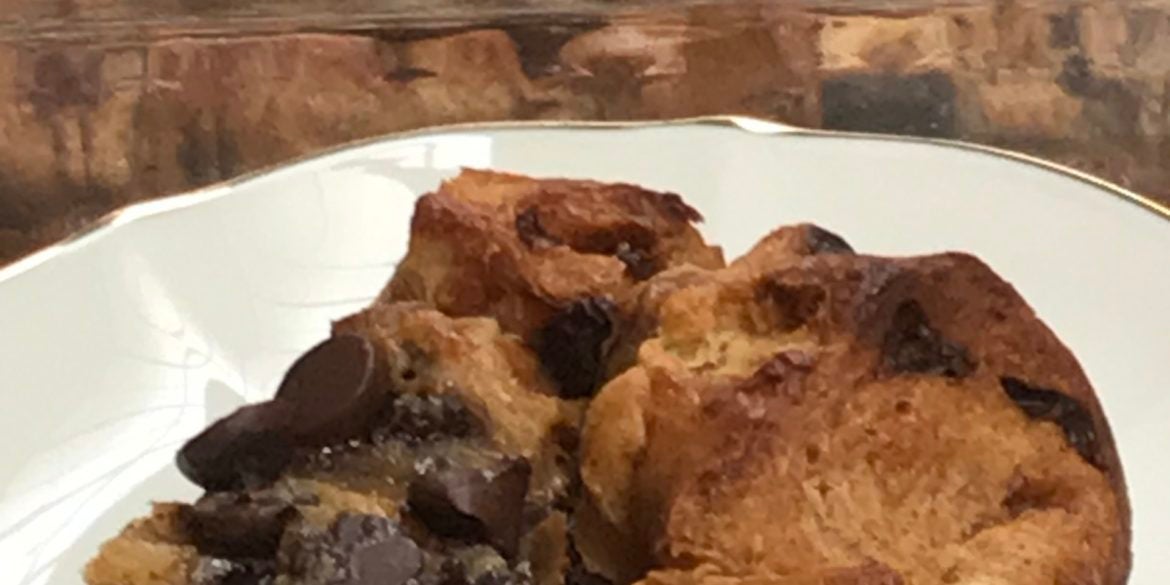 It seems almost a tradition, when in Baguio, to buy and bring home some loaves of raisin bread.

There are two main sources of raisin bread in this mountain resort city: Baguio Country Club (BCC) and the bakeshop in The Manor at Camp John Hay. Both are excellent and whether one prefers one loaf to the other would depend on how much raisins one likes in the loaf.

The loaf in BCC has a bountiful amount of it while the one John Hay is a little more restrained in its use of raisins, which would suit those who want their raisin bread a little less on the sweet side.

On a recent trip to Baguio, I did what everyone else seemed to be doing—I bought several loaves of raisin bread. Back in Manila, I decided to turn one of them into bread pudding.

What a pleasant surprise. The pudding looked so appetizing, with its deep golden brown top and with the raisins and chocolate chips peeping from beneath the surface. Moist and full of flavor from the spices and the other ingredients, it was also very rich and decadent. This is taking bread pudding to a whole new level.

This is also a creative way to make use of raisin bread—in case you happen to be lucky enough to receive one as pasalubong from Baguio.

You can serve the pudding as a snack or dessert. Rich as it is, you can even enhance it further with a drizzle of caramel sauce or a dollop of whipped cream on top.

Slice the raisin bread into cubes. In a large bowl, whisk together the sugar, milk, eggs, cinnamon, nutmeg and vanilla. Stir in the raisin bread cubes and let them soak in the mixture for about 15 to 20 minutes.

Bake in the preheated oven for 35 to 40 minutes or until the top is golden brown and a cake tester or toothpick inserted in the center of the pudding comes out clean.