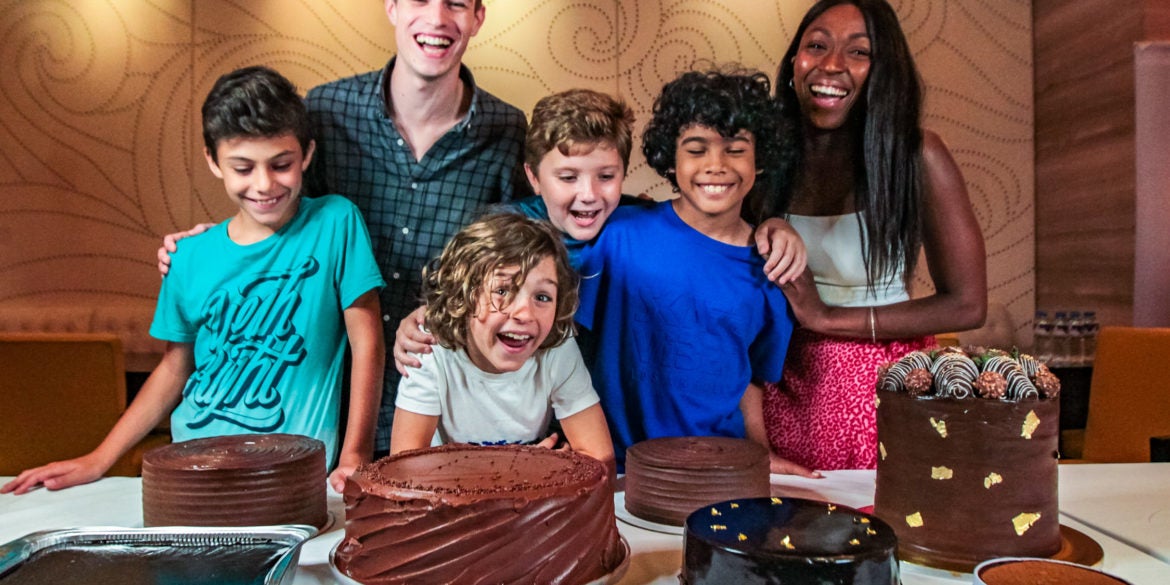 Any “Matilda” fan—whether of the Roald Dahl book or the film or the musical it inspired—can tell you about this memorable scene: the horrid, horrid Miss Trunchbull punishing poor Bruce Bogtrotter by forcing him to eat an entire chocolate cake while his classmates at Crunchem Hall cheer him on.

The Royal Shakespeare Company’s international touring production of “Matilda the Musical” has two Bruces—young actors Matthew Leck and Jaxon Cohen who are both making their professional debut in the show—and they have the joy of bringing this scene to life onstage at The Theatre at Solaire.

“I love eating chocolate cake and also being a revolting child,” said Jaxon, before simultaneously dabbing with Matthew.

The chocolate cake scene is a fun scene, they both agree, but they were tight-lipped when we tried to get them to spill the secret behind it. “Please?” we asked. “How do you eat an entire cake onstage?”

“We have a big appetite,” Matthew said, smiling.

Matthew joked, “Yeah, they don’t feed us lunch or breakfast so we have dinner onstage.”

Were they up for it?

“Yes! We are Bruce after all,” said Matthew.

“We are Brucies,” Jaxon agreed.

“This is heaven,” said Matthew, as they looked at the spread in front of them at Solaire’s Theatre Café. We had cakes from Toby’s Estate, Wildflour Café + Bakery, The Sweet Life by Ange, Big Al’s, Solaire and M Bakery waiting to be devoured.

Being a true Bruce, Jaxon took the lead, slicing through the layers of Wildflour’s Salted Caramel Chocolate Cake. He took a big bite and said, “Mmmmm, it’s so good!”

“It’s so good!” the others echoed.

They enjoyed the cake so much that assistant company manager Brooke Almond had to get the kids to slow down and eat smaller pieces of the cake. “Let’s make smart choices, guys. You have six more.”

Yes, Toby’s Estate’s chocolate cake is called the Bruce Bogtrotter, making it perfect for the challenge.

“Does the other Bruce approve of the Bruce Bogtrotter cake?” we asked.

Matthew took a big bite and slid down his seat with his arms in the air. “It’s so good. Oh my gosh, this is the best thing I ever put in my mouth. This is the best cake in the world.”

Yep, the Bruce Bogtrotter cake got two thumbs up from the show’s Bruces.

Caleb savored his slice while Daniel kept saying, “This is good.”

They called The Sweet Life by Ange’s Salted Caramel Chocolate Paradise Cake “the little baby one” because in its 5-inch tin can, it is the smallest of the lot.

“It’s so cute, I love it,” said Matthew, clapping.

Caleb dug into it, cracking the top layer of Ghirardelli chocolate and putting an explosion of cold dark chocolate sauce, ganache, salted caramel and chocolate cake into his mouth. “Oh!” he gasped, throwing his head back. “That is so good!”

Daniel’s eyes went super wide when he tasted it while the bite Matthew took made him push his chair back. “Oh my goodness. What the heck! Call 911,” he said. “That’s the best cake!”

“Every cake is the best cake,” we teased him.

Jaxon took a bite, hugged himself and said, “Somebody call 911.”

Daniel dug in and said, “Caramel! Oh my goodness!”

As Ipeleng and Michael took bites, Matthew told them, “The caramel is so good, I think you’re going to love it.”

They nodded in agreement, their mouths full.

The Sweet Life by Ange delivers. Place your orders through https://livethesweetlife.net.

There was a chorus of “whoas” when Jaxon dug into Big Al’s Decadent Chocolate Cake and they saw the icing glistening from his fork. Jaxon took a bite, his eyes widened and he smiled as he fell back against his chair, clutching his heart. Caleb took a big bite, too, and another one, making sure he got all the chocolate off his fork. He threw his head back, sighing and saying, “That is so good!”

Matthew clapped and Daniel raised his eyebrows after taking a bite.

Matthew counted down, “Three, two, one…” and the boys posed and said, “Whoa!”

The boys looked at Solaire’s Chocolate Cake (flourless and gluten-free dark chocolate mousse cake with chocolate gelée) and, spying the gold accents on it, one of them said, “It looks like Solaire!”

“It’s golden!” Matthew said as Michael sliced the cake for them.

At this point, the boys started singing the song “Bruce” from the show.

You can order Solaire Chocolate Cake from the Oasis Garden Café and The Patisserie at Solaire Resort & Casino.

Matthew pointed to the massive three-layer 12-inch Classic Chocolate Cake with Chocolate Buttercream from M Bakery and started singing the song “Miracle” from the show, altering the lyrics, “My mummy says this is a miracle.”

And we agree—M Bakery’s rich, moist, dark, velvety chocolate cake with chocolate buttercream does taste like a delicious miracle.

“It’s the size of your head,” Michael said. “I think we’ll all have to share this slice.”

“Yes!” Ipeleng agreed. “We’ll each have one bite.”

The two Bruces continued singing the song “Bruce”: “We never thought it was possible/But here it is coming true/We can have our cake and eat it too.”

“Oh my god,” Jaxon said, his mouth full of cake.

Caleb slid down his chair again and Matthew said, “That was so good I’m getting another bite.”

Jaxon asked, “Matt, how do you have space for that?”

Michael said, “That is so rich.”

FOURTEEN AND FABULOUS CHOCOLATE CAKE BY THE SWEET LIFE BY ANGE

“Who made that?” they asked, spying the tall chocolate cake topped with huge chocolate-covered strawberries, Kit-Kats, Kisses, Maltesers and Ferrero Rochers.

Ange de la Cruz and her team did, giving their Fourteen and Fabulous Chocolate Cake the Bruce Bogtrotter treatment by doing a caramel filling.

“I need a chocolate strawberry!” Matthew said, his eyes going wide. “Those strawberries are huge!”

“Jaxon, it has Kit-Kats on it!” Matthew said.

As slices were handed out, Matthew gasped. “Hershey’s Kisses!”

“Do you want a strawberry, too?” we asked Jaxon.

“I need a Ferrero Rocher,” he replied.

“I haven’t even tried the cake, I’m just trying the accessories,” said Matthew.

And when he finally took a bite of the cake, he said, “Mmm! That’s good!”

Get your own Fourteen and Fabulous Chocolate Cake from The Sweet Life by Ange. Place your orders through the website https://livethesweetlife.net.

“How are you feeling after seven cakes?” we asked.

“I’m feeling like I’m on a sugar high,” said Matthew.

When they were done tasting all seven, we asked them to choose their favorites.

“What about you?” we asked Jaxon.

“All of them!” said Jaxon, his voice muffled by yet another mouthful of cake.

“Same! All of them!” Caleb agreed.

Matthew said, pointing to the Salted Caramel Chocolate Paradise Cake, “I like all of them but that one’s my most.”

“Which one’s your favorite?” we asked Daniel.

“The Bruce Bogtrotter!” he replied.

All seven cakes (what’s left of them anyway) were brought backstage at The Theatre at Solaire where t he rest of the cast and crew also got the chance to channel their inner Bruce Bogtrotter and have a very chocolatey afternoon.

Sadly, after the announcement of the Metro Manila community quarantine because of COVID-19, the rest of the “Matilda the Musical” performances have been canceled. And it’s a shame because it’s such a good show. We’re going to drown our sorrows in chocolate cake.

“Matilda the Musical” was produced by GMG Productions, GWB Entertainment and Virtus Live.