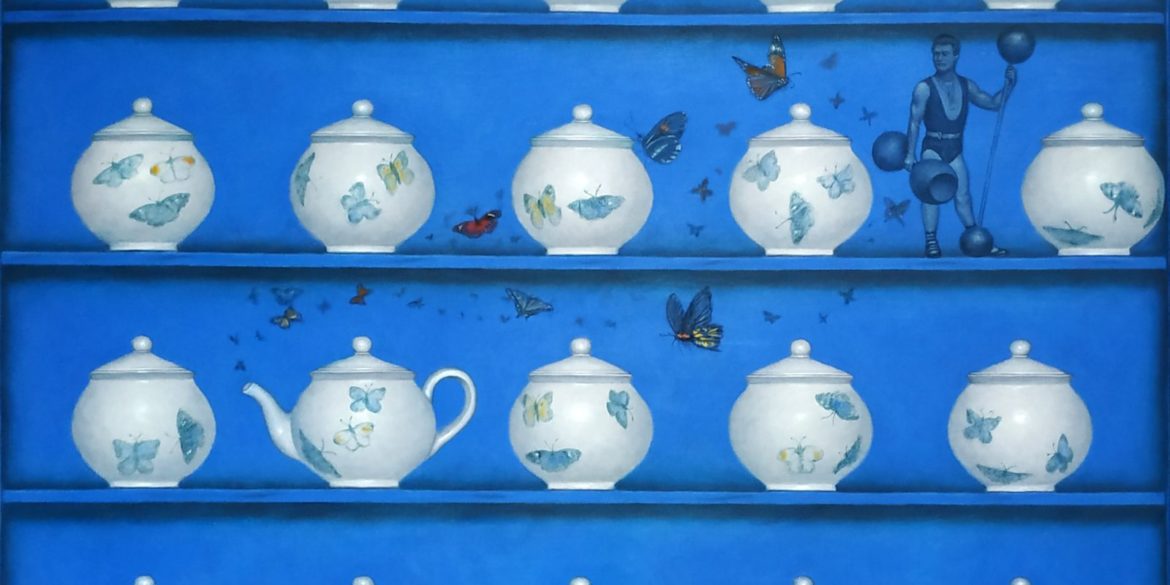 Nikulas Lebajo: From repetition to transgression

For years, repetition has been Nikulas Lebajo’s signature aesthetic. His large canvases are often depictions of recurring still life objects, assembled in obsessive linear patterns and rendered in a muted palette that invite scrutiny and contemplation. Rather than mere demonstrations of skill and the rhythmic properties of art, Lebajo’s signature style is actually a philosophical introspection on the dynamics of material culture in the age of unfettered production and consumption.

It is quite the surprise, then, to see Lebajo leave the comforts of compositional minimalism to foray into a more expositional visual territory. In “Carnival,” his latest exhibit on view at the Shangri-La Mall’s Saturday Group Gallery in Mandaluyong until March 31, the artist showcases a welcome and refreshing turn toward a more figurative and narrative vocabulary.

Strategically, Lebajo deploys motifs relating to the spectacle and chaos of the carnival, tapping into a symbolic universe of deviants, transgressors and subversive revelers. For Russian scholar Mikhail Bakhtin, the medieval carnivals of Europe where flashes of transgression, allowing for the momentary inversion of state and Church hegemony. Through satire and boisterous merriment, the masses were able to openly make fun of the political order and in effect disrupting culture.

In his new works, Lebajo appropriates this spirit of disruption and deviancy in a manner that is both self-reflexive and whimsical. In “Jars” he pokes fun at his own repetitive tendencies by punctuating a gallery of porcelain with butterflies and a muscleman in period singlet. The juxtaposition is unexpected, with a subdued sense of irony and humor.

“Circus,” meanwhile, is an assembly of the usual carnival suspects: trapeze artists, contortionists, balancing acts surround the strong muscleman in a mythical place where Lebajo effectively situates peripheral subjects as central figures, demanding attention, extorting currency.“Circus still life” is yet another unlikely cacophony of motifs. Here, the artist playfully surrounds a traditional still life setup of apples and earthenware with a spattering of carnival curiosities including a transgressive figure on a unicycle. This collision of worlds works effectively to problematize the normative prescriptions of genre and technique, a central project of Bakhtin’s carnivalesque critique.

In “Butterflies” Lebajo demonstrates the range of his gifted hand, pandering almost to the contemporary proclivity for prettified puff portraitures. The face of a beautiful woman is the focal point, around her are a pastiche of flora and fauna, rendered in a strong, graphic style. Yet, this is perhaps Lebajo waxing reflexive-transgressive, a simultaneous demonstration and critique of duplicitous machinations in art and culture.

Whether this exhibit marks a turning point in Lebajo’s career or a passing deviation remains to be seen. Nonetheless what the artist shares are the wondrous fruits of journeys outside the realms of the comfortable, safe and familiar. —CONTRIBUTED INQ