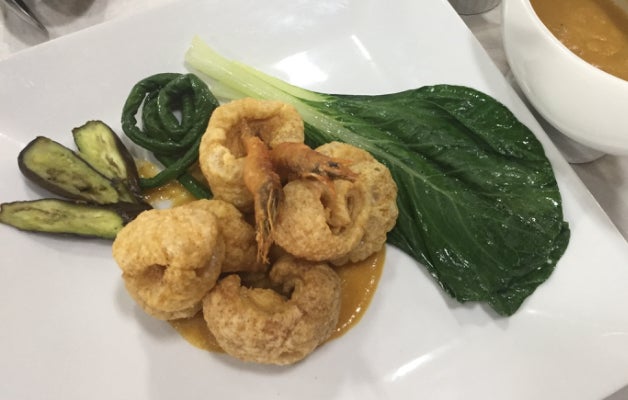 The town of Sta. Maria in Bulacan recently staged its annual festival celebrating the product it is most proud of—chicharon.

Corpuz, coauthor of a book on the history and culture of the town, said the festivity is a way of giving importance to one of the most notable products not only of the town but the whole province.

He said the chicharon industry in Sta. Maria started as a backyard industry in the 1920s using native black pigs called “baboy Tagalog.” It has since become one of the major industries of the town.

This year’s festival was highlighted by a cooking competition using chicharon as the main ingredient and culminated in the traditional street dance parade.

The cooking participation was participated by more than 10 local schools and restaurants concocting traditional to fusion dishes.

Jimrey Bar and Restaurant of Barangay Catmon topped the competition with its chicharon kare-kare, bringing home the cash prize of P30,000.

Food advocate Rheeza Hernandez who served one of the judges said culinary heritage and traditions are good indications of history and the state of a community. They mirror culture, history and economic development.

“Sta. Maria’s festival is a good undertaking since aside from promoting their culinary traditions, they would like todevelop it further and would like to see its other culinary potential,” she said.

Hernandez said that despite the innovations, their traditional characteristics should be maintained and suggested a deeper look and study of the chicharon to further improve its potential as cultural item and economic livelihood.—CONTRIBUTED INQ