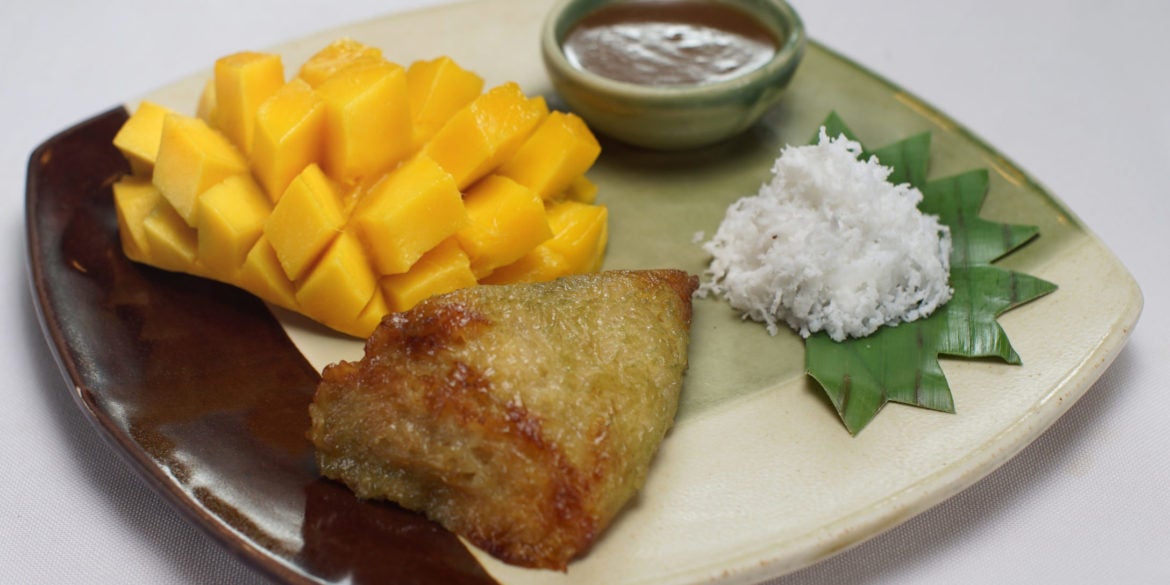 If you were to ask book designer and culinary historian Guillermo “Ige” Ramos Jr. what the Philippines’ national dish should be, he’d recommend suman, the ubiquitous glutinous rice cake wrapped in banana leaves.

While adobo is considered as the nation’s signature viand, Ramos said it has no single uniform recipe, which varies from region to region.

Having traveled from Ilocos to Midsayap, and from Isabela to Marawi, Ramos said he has discovered that the suman transcends boundaries of ethnicity, religion and class.

“Way before Thai restaurants served the sticky rice and mango dessert, we’ve been eating suman with cashews and mango,” he explained. “The suman can be cosmopolitan or it can be rural. It can be eaten alone or as a celebratory dish in a fiesta.”

Its main ingredients—rice, sugar and coconut—have produced hundreds of varieties of suman. Yet what unifies all of these would be the chewy texture and mild starchy flavor of the rice cake.

Historically, these ingredients are the “foods of oppression,” Ramos said. Through the decades, farmers have suffered from the high taxes imposed on these basic commodities.

The suman, its varieties and many cultural and social references, makes an important chapter in Ramos’ book, “Dila at Bandila: Ang Paghahanap ng Pambansang Panlasa ng Filipinas” (loosely translated as “Tongue and Flag: The Search for the National Taste of the Philippines”).Published by Anvil Publishing, “Dila at Bandila” will be promoted in “Feast of Flavors,” a traveling show organized by the SM Malls of South Luzon.

“It’s an important milestone for the book,” Ramos noted. “A big corporation like SM Malls took notice of the book’s subject matter and what it stood for.”

“Filipino food doesn’t confine itself to Hispanic fiesta tradition,” said Ramos. “We had Austronesian elements such as coconut-milk dishes, lechon (not the cochinillo), the kinilaw and the ihaw (grilled foods).”

“Dila at Bandila” is the first of seven volumes of “Lasa ng Republika,” Ramos’ collection of researches and his theories about Filipino food.

Ramos earlier published “Republic of Taste: The Untold Stories of Cavite Cuisine,” which included historical anecdotes, heirloom recipes and observations on the complex tastes of local dishes. He said his foray to culinary research was not by design but “by fate.” Growing up in Cavite, he was exposed by his parents to the culinary process, from going to the palengke or market to working in the kitchen.

As he grew older, he would travel around the country and try to replicate the dishes that he had savored.

Since 1994, Anvil Publishing had been commissioning him to design culinary books written by prominent Filipino chefs and food writers.

Reading the manuscripts to get ideas for his book designs exposed him to food writing.

A turning point came in 2004 when Anvil gave him the manuscript of “Governor General’s Kitchen” by culinary historian Felice Sta. Maria.

“The food narrative was well-written. I developed a fascination for Filipino food,” he recalled.

Ramos became obsessed with why his native Cavite cuisine was off the book’s radar. Consequently, he kept returning to his province to talk to carinderia cooks, public market vendors, kakanin makers, fishermen and farmers to learn more about the cuisine.

In 2008, he worked as the creative director of the interior design magazine, Cocoon, and ran a section on dining and entertaining.

He also began to write a food column, “Bandehado,” for Bandera, Inquirer’s Filipino tabloid. The column was based on his researches.

“I never thought of a target reader when I was writing for Bandera as it was for general readership. Surprisingly, men in their late 30s and 40s, asked the most interesting questions and requested recipes and cooking tips from exotic pulutan to home cooking and big fiesta fare,” Ramos said.

When he became editor in chief of a supermarket magazine in 2011, Ramos was overwhelmed by the coverage of imported foods promoted by the grocery chain. He yearned to write about more substantial matters.

Eager to preserve his discoveries, he started gathering materials for his data base as a hobby.

“The work-hobby dichotomy turned out to be a discipline,” he said. “I became a food writer and researcher.”

In 2012, Ramos again joined the DGF and won first prize for his essay “Halayang Sampaloc.”

In 2015, he was invited to be a fellow at the Kritika 2015 criticism writing workshop organized by De La Salle University and its Bienvenido N. Santos Creative Writing Center. He submitted three essays in Filipino to be critiqued in the workshop, including the original draft of “Dila at Bandila.” It was severely criticized during the workshop.

“My background came from a consumer publication,” he explained. “I had to adjust to the scholarly style.”

He revised the essay and substantiated it with more research. He presented the revised paper in 2017 during an international conference in Manila on Philippine studies.

During the 7th Asia-Euro Conference in Tourism, Hospitality and Gastronomy 2018 in Manila, Ramos was invited to the panel on heirloom recipes and terroir (how the taste and aroma of food are influenced by the environment).

French gastronomy professor Pierre Poulain was impressed with Ramos. He said that while most of his colleagues in gastronomy education had doctorates in anthropology, Ramos’ background in cultural studies, consumer writing and publishing gave him a unique perspective. The French expert described Ramos’ specialization as comparative gastronomy, the study of the relationship between food, society and climate, and the connection between cultures.

The cross-cultural links between cuisines is exemplified in Ramos’ observation that the Philippine kare-kare, stewed oxtail stew, is similar to the gado-gado, the Indonesian vegetable dish with peanut sauce.

“Food writing tends to be equated with creative nonfiction or personal essays on food choices,” said Ramos to explain his shift to food research and scholarship.” Genuine food writing should be insightful and transformative. A sentence or a recipe should change you.” But his method of “ethnography” remains practical and homespun. “I’ve been around from carinderia to fine dining,” Ramos said. —CONTRIBUTED