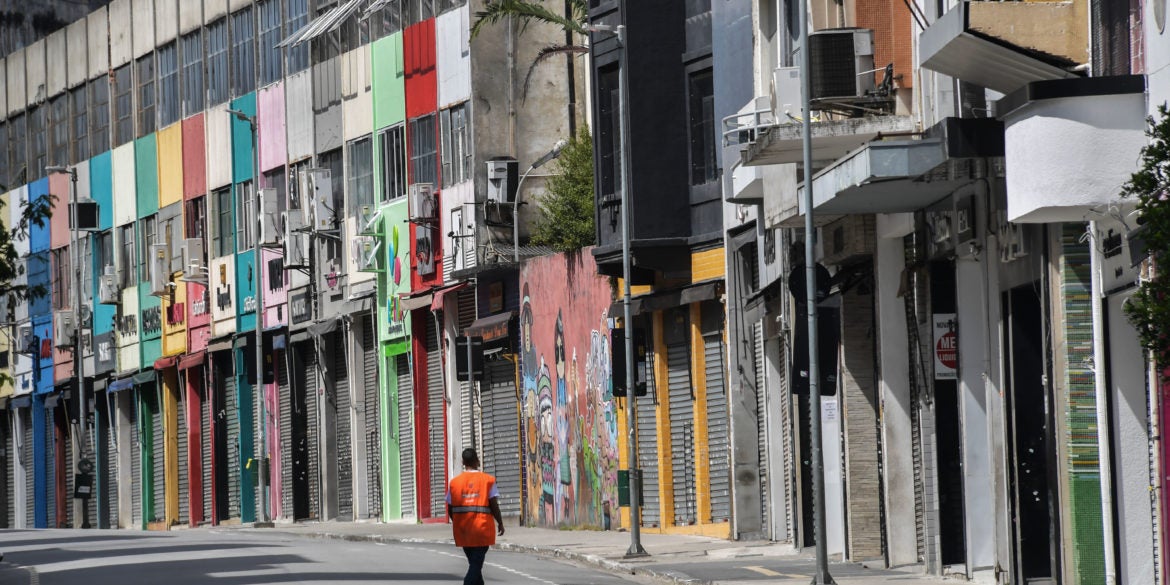 A man walks on an empty popular shopping street after the city government decreed the closure of shops and stores as a precautionary measure against the spread of the novel coronavirus COVID-19, in downtown Sao Paulo, Brazil, on March 24, 2020. - Latin America's biggest city, the traffic-clogged concrete jungle of Sao Paulo, slowed to an eerily quiet lull Tuesday as it went into partial quarantine in a bid to stop the new coronavirus from ravaging Brazil. (Photo by Nelson ALMEIDA / AFP)

Latin America’s biggest city, the traffic-clogged concrete jungle of Sao Paulo, slowed to an eerily quiet lull Tuesday as it went into partial quarantine in a bid to stop the new coronavirus from ravaging Brazil.

A few walkers and joggers were the only signs of life on the economic capital’s central artery, the normally jam-packed Avenida Paulista, as the city and state of Sao Paulo went into 15 days of quarantine.

The measure is less drastic than those taken in Europe and neighboring Argentina. The state government has ordered the closure of all “non-essential businesses and services,” but has not ordered people off the street for now — though it is strongly encouraging them to stay home.

“This is not a vacation. We’re at war. Do not go outside unless it’s absolutely essential,” Governor Joao Doria said Monday.

That did not stop Ana Dias, 71, from going out for a walk to soak up the morning sun filtering between the towering skyscrapers.

“I think people are exaggerating a bit. This measure (the quarantine) is hurting everyone,” she said.

“It’s not as bad as all that. I think restaurants could stay open, if they just separated the tables a bit and used hand sanitizer.”

Sao Paulo state, home to 46 million people, has roughly the population of Spain, and provides one-third of the total output of Latin America’s biggest economy.

But the only businesses open now are pharmacies, supermarkets, bakeries and others deemed essential.

The state is the epicenter of the outbreak in Brazil: 40 percent of the 1,891 cases registered in the country have been here, and 30 of the 34 deaths.

Businesses largely respected the quarantine. But in a city defined by its bustle, some citizens are reluctant.

Some of the biggest offenders were seniors, even though they are part of the population that is most at risk.

“This only affects people who have underlying conditions, or little love for life,” said Luiz Andrade, 71, who explained he was out on the street “to enjoy life.”

Others who had to be out of their homes for work felt differently.

“They should have shut down everything,” said Larissa Miranda, 18, at the news stand where she works, whose cash register she was wiping down constantly with alcohol.

“I’m very worried. What good is this quarantine if I have to take the subway with everybody else to get to work?”

The government has exempted the industrial sector from the quarantine, arguing the state’s factories do not have direct contact with the general population.

“If we stoped the factories, we would have an economic collapse, and not just in Sao Paulo,” the governor said.

The city, a sprawling metropolis of 12.2 million people, is also known for the spectacular gap between its rich and poor inhabitants.

For the latter, there are no good options.

Miriam, a 25-year-old homeless woman, lives in a tent on Avenida Paulista with her husband and dog.

“I’m worried, obviously. We’ve been keeping a bucket full to wash our hands,” she said.

She does not want to go to a homeless shelter, she said, “because they’re full of coronavirus.”

A debate is raging over how much measures such as quarantines will protect the urban poor.

If the virus hits Brazil’s impoverished favela neighborhoods, with their lack of basic health and sanitation infrastructure, it could be a humanitarian catastrophe.

But if favela residents can’t work, they face starvation.

Stuck with no good options, policy makers trying to slow the spread of the outbreak in Sao Paulo got a distressing piece of news Monday: the infectious disease specialist leading the state’s coronavirus battle, Davi Uip, is the latest resident to test positive for the virus.

Cover image: A man walks on an empty popular shopping street after the city government decreed the closure of shops and stores as a precautionary measure against the spread of the novel coronavirus COVID-19, in downtown Sao Paulo, Brazil, on March 24, 2020. (Photo by Nelson ALMEIDA / AFP)