Fr. Johnny Go: ‘Don’t give up. Like Him, get up’ | Inquirer Lifestyle 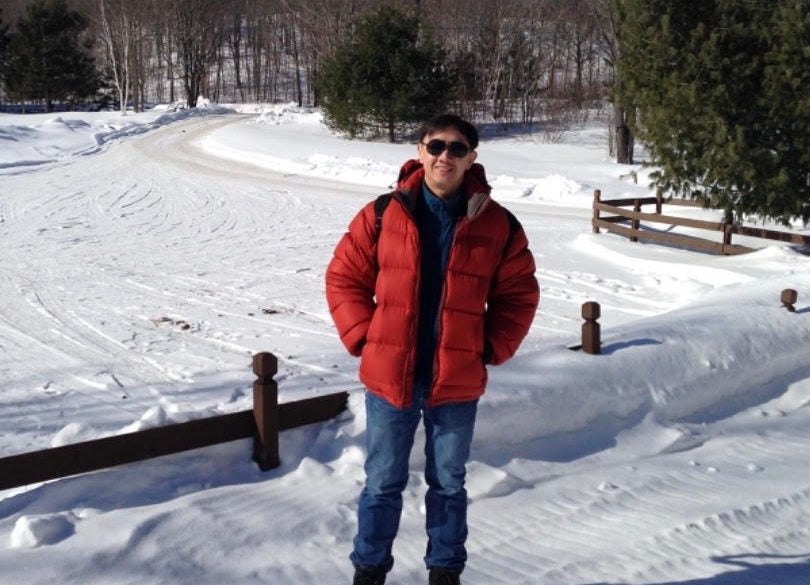 The Jesuit, who pioneered in bringing the faith online, steps up with inspiring messages during the pandemic

“The question on all our minds is: Will our bodies, like the Lord’s, like the over 400,000 as of today’s global count of confirmed COVID-19 (new coronavirus disease) cases, also take a fall?” writes Fr. Johnny Go, SJ, in the Third Station of the Cross, “Jesus falls,” in “The Way of the Cross in a Time of Pandemic.”

It’s a set of reflections the Jesuit educator has posted in his immensely popular blog, “Pins of Light” (pinsoflight.net).
“But here’s another question that should also be on our minds: Will our hearts also take a fall?” he continues. “Will we also lose heart, lose hope, lose faith as we hear disheartening news each day, as we continue to expose ourselves to the world’s fear and panic?

It’s the kind of engaging, insightful prose that made “Pins of Light” a pioneering avenue for the Catholic faith, touching people long before online prayer groups became mainstream. As he has always done, Father Johnny took a dark issue that’s top of mind, and somehow, found God’s light in it.

Even before the Way of the Cross, Father Johnny was already widely followed for his annual Holy Week retreat, which allows people to log on and be one with the Lord in His Passion, through words, music videos and art—he was a high school principal, so he knows how to communicate in a youthful, down-to-earth tone.

This, from a guy who, by his own admission, was “in denial” about the call to priesthood for many years. He is now director of the Institute for the Science and Art of Learning and Teaching (the SALT Institute) of the Ateneo de Manila University.

The Holy Week Retreat starts April 9, with the theme “Praying Between the Lines (Stories+Silences of Lent).” Father Johnny has put up a trailer (www.youtube.com/watch?v=qDQmNvR5eZI), and you can also follow the Facebook Page for Pins of Light (www.facebook.com/pinsoflight). You can also log on to the Way of the Cross any time.

In a March 22 online homily, Father Johnny warns against online negativity: “People are worried and scared as it is—and we have every reason to be. But it does not help when we amplify or exaggerate the bad news—especially when they have not been verified.”

Still, he ends with a reassurance: “I think we can be sources of hope for one another when it is so fashionable and so tempting to spread fear and desolation on social media,” he writes in the same homily. “But if we know our Bible well enough, we know that it is not God who uses fear as a favorite tactic. If there is one recurring refrain in Scripture, it is: ‘Do not be afraid.’”

It’s COVID-19 lockdown, and people are turning to social media for spiritual assurance! Is this good? What role do you think social media can play in times like these?

Clearly, as the need for distancing and isolation continues, we may have more people looking for things to do during Holy Week—and maybe, a number will be looking for more “meaningful” things. I’ve been on Twitter, so I know that if we’re not careful, social media can bring out the worst in us and lead us into that quick descent into mass hysteria or desolation. I’m hoping that our online retreat will do the opposite—raise people’s spirits, coax their best selves out of them, but always keep them grounded in the not-so-pleasant reality we’re facing.

How do you believe the Church should continue to maximize social media and the web to reach out to Catholics?

Happily, there are lots of effort going on on social media. Social media is a two-edged sword, because aside from its numerous benefits in terms of social connections and education, there are lots of risks, as well. But the alternative is to be absent from a world where everyone else—especially the young—are already immersed in. I am pretty sure that if the Lord decided to be human today, he would most certainly be online.

How old is “Pins of Light”? How would you describe it, other than as your own blog?

“Pins of Light” has been a Bible and recollection blog: It’s really just sharing the homilies that we priests have to prepare regularly anyway. I’ve never been a speaker, so I always wrote out my homilies (almost verbatim), so I figured, why not just put it out there? The response was unexpected: People were sharing the links, posting comments, etc. So I just kept at it without any long-term plan, and 12 years later, here we are.

How old is the online Holy Week retreat? Why an online retreat?

This year will be the 13th year of the online Holy Week retreat. I actually have a list of themes on my blog (https://pinsoflight.net/recollections-2).

I try to come up with a different take or theme each year. A friend who saw me slaving away suggested, “Why don’t you just rehash some? People won’t mind.” But I do it because I would get bored if I just rehash a previous theme.
The way I see it, there’s always something new about Lent, depending on where we are in our lives. So in many ways, the online retreats emerge from what I myself am going through.

The very first of these online retreats came about because Fr. Francis Alvarez, SJ, a scholastic then in charge of the Philippine Jesuit webpage, needed some Lenten content to offer readers, so he asked me if I would be interested. Since I conduct a Holy Week retreat almost every year (I say “yes” any chance I get, because frankly, it’s good for my soul!), I thought: “Well, it’s just one extra step.” As it turned out, it wasn’t, but I found the production process really interesting, and I learned a lot as we went along.

The response was so unexpected. The website crashed on the first day because there were so many visits. The best part was the very honest and profound sharing that people posted (anonymously). Many moved me to tears, and frankly, that’s what’s made me keep at it.

The “attendance” of your online retreat has grown tremendously. Are you aware that you are perceived as a pioneer in this area?

I don’t know about pioneering. That was the last thing on anyone’s mind when I started and fumbled along through the years. I just wanted to provide people another opportunity to connect with God for Lent.

The attendance has been up and down: Some years have been much higher than others, and it’s always the same pattern: a lot on Holy Thursday and Good Friday. People sometimes introduce themselves by telling me how many years they’ve done the online retreat: I’ve met a few who’ve done every one of them. Who knew?

As a priest reaching people virtually, what has your experience been? Aren’t you concerned people will stop going to Mass and just “log on” instead?

The best part has been the online sharing about their faith, their lives, and especially their troubles. They share their insights and questions, but also their prayers. Often our online retreatants read one another’s comments and feel blessed by the sharing of others, and they offer their prayers for them. Filipinos in the Middle East in particular are very appreciative, because they say they don’t have too many options there during Holy Week.

So the sheer number of people who express their appreciation—that’s a big upper.

The way I see it, we ended up forming an online faith community without planning to do so. That’s really very consoling.

Downs? Can’t think of any, except the super hard work that goes on that week every year! I have a day job and don’t do this full time, so I end up cramming. Every year I swear to myself it will be the last one, but I read the sharing, and I fall for it again the next year.

Because it’s all so last minute, I basically do the whole thing myself, including video editing and formatting. But once in a while, I get help. The most significant help I get is from brother Jesuits like Fr. Eric Escandor, SJ, who’s in charge of the optional online spiritual direction chatroom.

I’m not worried about the blog causing people to stop going to Mass. The blog isn’t that powerful. I think folk will stop going to Mass because they don’t want to and have decided not to, with or without “Pins of Light.” What we’re trying to do is to tell people, “Here’s a place where you might find God by pausing, thinking about your life and praying. Hope it helps.”

You studied Psychology at Ateneo. How did the call to the priesthood come? How did you come to “specialize” in communication?

I took up Psychology because, like a lot of my friends in the ’80s, I wasn’t sure what I wanted to do. Looking back now, I recognized the calling ever since I was a kid, but I was in denial. I wasn’t into the idea of becoming a priest, but thank God, God didn’t give up. I have lots of flaws, but I’m grateful for the call because it summons the best out of me. My original ministry was supposed to be communications: I headed Jesuit Communications on the Ateneo campus for four years, around the time of my ordination, and was headed for graduate studies in media when my Provincial sent me to head Xavier School in Greenhills—but, he promised, only for one year. I ended up staying for 12 years (!), and my ministry has since shifted to education. But as you can imagine, communication has always played such a valuable role in my work as an educator and as a priest.

Any advice to people stuck on social media during quarantine?

The advice I can give is the advice I most need to hear: Choose what you expose yourself to and what you spend your time on. Stay informed, but watch against the unnecessary amplification of all the uncertainties and negativities that go with the times. It’s easy to get discouraged and to spread that discouragement when what we need is faith and courage, especially because everything’s so iffy.