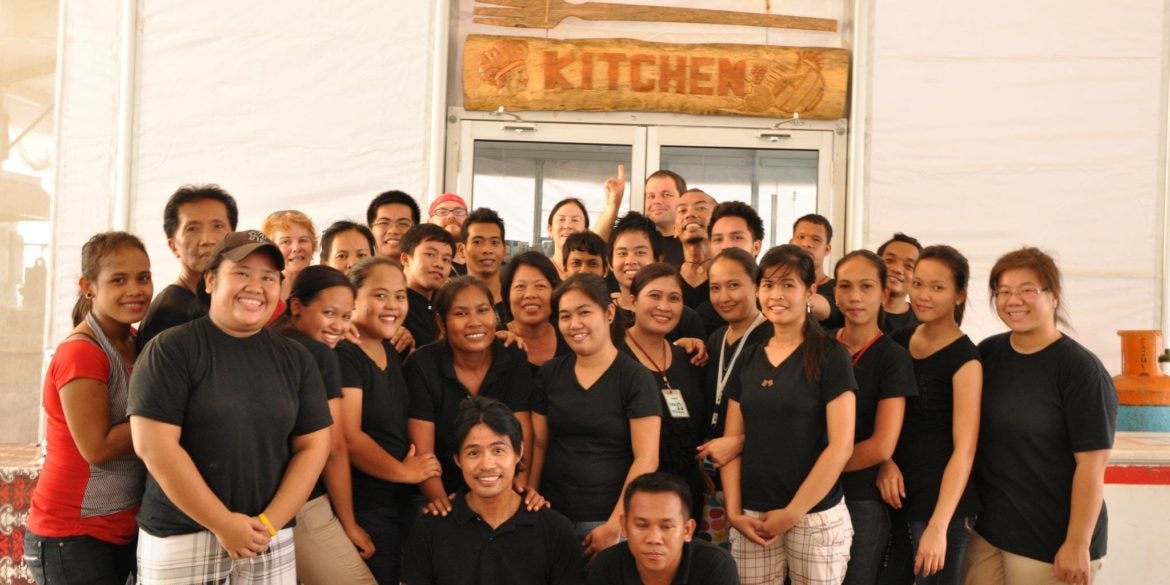 When the longest-running US reality TV series “Survivor” filmed its 25th and 26th seasons in the Philippines in 2012, the production company called for Filipino chefs to help the catering team provide meals for the staff.

Sabrina Jayne Gan didn’t think twice and sent her resume. She was a big fan of the show. A graduate of Hotel, Restaurant and Institution Management of De La Salle-College of St. Benilde, the 36-year-old has professional experience feeding big groups of people.

In 2008, she was hired by NBC network to cook for 800 during the Summer Olympics, and later that year by Omega for the Paralympics, both in Beijing where she was based at the time.

“I got a call from Marianne Houston, the catering manager of ‘Survivor,’ when the principal crew was in the country to check out the location and suppliers,” Gan says. “Because of limited time, there was no kitchen test, only a 30-minute interview. I was offered the job a couple of days after.”

In 2012, she joined the “Survivor” kitchen team of 27 (seven chefs, both foreigners and Filipinos, and 20 locals from the province of Caramoan).

“Survivor” is now on its 40th season.

“Our menu usually has salads, soup, three proteins, rice, veg, something for the vegetarians and vegans, and dessert,” she says. “On certain occasions, we celebrate the 4th of July, Anzac day and Filipino Independence Day as there is quite a number of Filipinos working in different departments of the show.”

Since the team of 300 is composed of various nationalities—from Australia and the Americas to Europe and South Africa—the weekly menu is a mix of different cuisines. If the staff ends up really liking particular dishes, they become repeats, but not more than three times throughout the show’s production.

In Nicaragua, where there was no pastry chef, Gan offered to make basic desserts. She began with easy ones like cookies and sticky date pudding. Then a request for pecan pie came in and since it was something she had never done, she had to ask help from a former colleague.

“She sent me the Benilde Pecan Pie recipe and walked me through the whole process. Because I normally make three items for lunch, apart from preparing the breakfast dishes, I thought it would be smart to do the crusts a day before serving it. I stayed behind after work to do them. I was able to make eight pecan pies the next day, which I proudly posted on my Instagram.”

For Gan, “Survivor” isn’t just a job, but also an avenue for her to introduce Filipino dishes to people. “There is a certain pride I feel when they say that adobo is their favorite Filipino dish. There is even one Aussie who loves sinigang.” Among the crowd-pleasers for the international crew are sisig and bulalo.

While shooting in the Philippines, they were able to lay out a roster of traditional dishes in time for the Independence Day celebration. On the menu were lechon, ensalada, leche flan and kamote cue. It was easy because the ingredients needed were readily available.

In Nicaragua, they had to make their own itlog na maalat from scratch, which took three weeks, so they could serve the salad. In Fiji, they had to ask the crew to climb trees for coconuts for their buko pandan.

There were many instances when they had to use substitutes while keeping true to the flavors. For sisig, they used pork belly instead of maskara (pig’s face), and for the bulalo, veal shanks. Shrimp paste was hard to find in Fiji, so when their tubs of bagoong were about to run out, they bulked them up with tomatoes and bacon. In place of calamansi for their chicken inasal, the kitchen used limes or lemons.

Another challenge they commonly face is language barrier. It became most apparent in Cambodia where the locally hired crew didn’t speak English well. “I don’t speak Khmer, but as we started working together, I got to pick up basic terms for vegetables and cooking equipment, so I didn’t have to act them out to get those items.”

Another Filipino chef, Gil Rumbawa, is also with the show’s catering department. He started when they first filmed in the Philippines and has stayed on.

Due to new coronavirus disease (COVID-19), shooting had to be postponed and the two Filipinos are back in Manila until the production resumes.—CONTRIBUTED