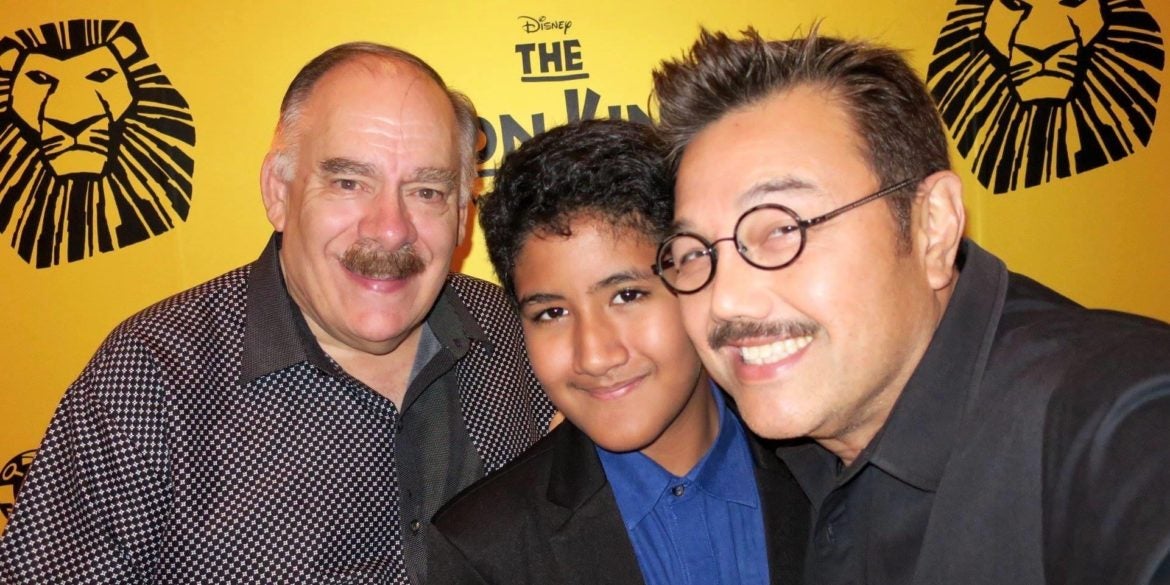 BobMiller (left) and Ito Curata with son Taj: “We wanted to instill in him Filipino values such as love of country, family and traditions.”

Robert “Bob” Miller hadn’t traveled back to the United States since he and longtime partner Ito Curata, the fashion designer, gave up their home in San Francisco, California, and moved to the Philippines in the aughts.

As far as the American was concerned, the Philippines was now home, where he and Curata built their little family after adopting their son, Robert “Taj” Curata, now 14. Taj “filled a void in our lives,” Miller said.

In a personal essay for Lifestyle in 2018, Miller wrote about raising their son: “We pledged that we would spend as much time with him as we could. We didn’t want to be absentee parents, and we regularly take him on Sunday trips, plan movie nights, and expose him to things like concerts and other cultural events, hotel stays, airplane trips, weekend vacations.”

They were so busy with Taj, never wanting to leave him alone with caretakers, that Miller and Curata hadn’t since traveled together without their boy, Miller told Lifestyle in 2019 when we visited their home.

In a tragic twist of fate, the boy they cared so much for is now left all alone, without the loving presence of his parents. Miller died on April 7, less than two weeks after Curata, 60, passed away. Both died from complications believed to be related to the new coronavirus disease (COVID-19).

Miller turned 75 last February, according to close family friend, Ann Puno. The Curata-Miller family used to spend their Holy Week breaks with the Punos in the latter’s beach house in Batangas.

The portly Miller retired early from his executive vice president post at Visa, where he worked for 30 years, before he and Curata moved to the Philippines. It was he who convinced Curata to make the move, suggesting to the Batangueño that they could build an even bigger house—their home in San Francisco was four stories and overlooked the city—“and we didn’t have to clean it.”

Miller adjusted quickly to life in the Philippines, as he and Curata, a successful fashion designer in California who dressed the likes of Sharon Stone, built their new life and social circle in Manila. They hosted parties in their sprawling home.

While friends loved Curata for his wit and wicked humor, they admired Miller for his warmth and intelligence. He regaled friends with stories about their life in the United States. Among the many he told Lifestyle was of his close encounter as a young man with Neil Armstrong, proudly showing off the personal note written to him by the legendary astronaut.

But what many remember him most for is his kindness and charitable heart. Miller supported, and volunteered in, many charities. A voracious reader, he set up libraries for the underprivileged in Makati, Ortigas and Alabang, and encouraged book donation among his friends.

In his 2018 essay, he wrote: “We wanted [Taj] to see ‘the other side of life’ since many people do not have the advantages he has. So, we regularly take him on feedings with our group, Angels to Street Kids. In fact, he is the group’s youngest member. Over the years, he has gone to poor barrios in Tondo and other places in Metro Manila, orphanages, the women’s prison, senior citizen gatherings, specialized care facilities for children with special needs, as well as similar organizations.”

“I met Ito and Bob in San Francisco when Ito agreed to design the costumes for ‘peregriNasyon,’ a play I wrote and directed for the inaugural season of the Yerba Buena Center for the Arts,” wrote Cultural Center of the Philippines (CCP) artistic director Chris Millado on Facebook.

“Although we were a fledgling community theater group and Ito was already an established designer, he graciously accepted the job and hosted the cast party in their beautiful home situated on a hill overlooking San Francisco. Bob and Ito’s congeniality were well known especially among Filipino and Asian American initiatives in the Bay Area.

“We met again when they moved to Manila and became loyal patrons of CCP shows, especially the productions of Ballet Philippines. The last time I saw Bob was in the screening of ‘Cats’ at the Alabang Commerce Center. He was with his son Taj and they were waiting for Ito who was stuck in traffic while on the way back from a client meeting. We chatted jauntily about the bad reviews of the movie musical we were about to see, and how this made us even more curious to see it.”

Writer and Ortigas Foundation Library executive director John Silva paid tribute to Miller in a Facebook post. He also met Miller and Curata back in San Francisco, at an AIDS benefit Silva organized. Silva recalled that the couple helped get the word out about the fundraiser, with many of their friends buying tickets.

“Years later, we returned to the Philippines and met on various occasions like the ballet and concerts,” Silva wrote. “I was touched one day when [Bob] offered to donate a large selection of his books to our Ortigas library. All the books were in fine condition, but one sensed they had been read.”

Miller wrote, “When [Taj] was about 6 or 7, we told him that we would always be honest and truthful with him. And this included the details surrounding his birth and our decision to make him a part of our lives…

“We wanted him to understand fully that he is loved unconditionally as our son. Several times we have been at a birthday party or other event where a family member introduces the birth children as ‘my children’ and then introduces ‘the adopted’ child. We would never make that distinction.”