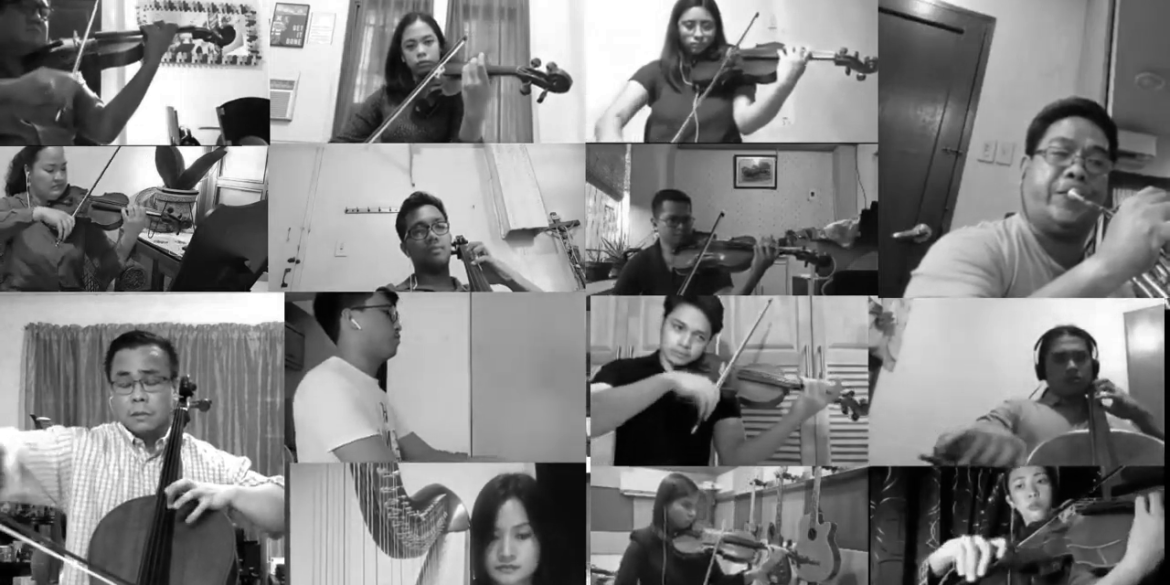 How the Manila Symphony Orchestra pulled off an ‘orchestra in quarantine’

Since the beginning of April, the Manila Symphony Orchestra has been treating its audiences with a gift of the virtual kind: digitally patched ensemble performances.

The first “orchestra in quarantine” project featured “Nella Fantasia,” also known as “Gabriel’s Oboe,” the theme from the 1986 film The Mission, about a Jesuit missionary who travels to South America to convert natives into Christianity.

The project was initiated by Jeffrey Solares, executive director of the Manila Symphony Orchestra, who also arranged the music and edited the videos.

Since, the Manila Symphony Orchestra has released other performances online, including The Beatles’ “Let it Be” and “Tifa’s Theme” from the Final Fantasy VII soundtrack.

Below I talk to Jeffrey Solares about how the orchestra pulled off this feat, and how musical artists are coping with repercussions of the pandemic.

How did the idea of doing a performance in quarantine come about?

“The idea came from some European orchestras who did it earlier, and several people showed me the videos, and some of our musicians wanted to do it, too. At first I didn’t know how to make those videos where several people are in one screen, but I had some time during the quarantine to do some research.

“I also thought of what music to do. (Most of the European orchestras were doing Beethoven’s ‘Ode to Joy,’ and I didn’t want to just replicate that.) [For the first one,] I thought of ‘Nella Fantasia’ by Ennio Morricone, which would be nice and easy to make.

“I arranged it for orchestra and distributed the vocal parts to some of the musicians. I bought a video editing software and did trial-and-error, and after about four days I was able to make my first attempt. It’s not yet perfect, but I’m still refining the process and, hopefully, the next video we will make will have better quality.”

The more challenging part is intonation, but since many of them have been playing together for several years, somehow the harmony is still there, even if they do not hear each other in real time.

What were the difficulties in executing this setup, and has the orchestra done this or anything similar before?

“It’s a difficult setup because we do not hear each other, which is essential to ensemble playing. I only sent them an audio guide of a mockup mp3 file with a click that serves as a conductor, and they play it with their earphones on while they make the video. That somehow solves partially the issue of ensemble and playing together.

“The more challenging part is intonation (playing in tune together), but since many of them have been playing together for several years, somehow the harmony is still there, even if they do not hear each other in real time.

“It is very nice to hear the harmonies blend when I start combining them in the software. Somehow the bond of the orchestra is still intact even if we have not performed for almost two months since the cancellation of most public performances.”

How has the community quarantine affected the activities of the MSO, and how is the orchestra coping?

“Our main livelihood is playing in concerts and events, and these have been cancelled, so we are not sure of what lies next. What sustains it at the moment is the few patrons who agreed to pay us now for future projects that I proposed. Hopefully this will push through.

“There are some promised grants to us, but some government agencies have yet to approve their release. I hope the government will also see the urgency of our needs as musicians and artists.”

Watch the orchestra’s performance of “Nella Fantasia” below.