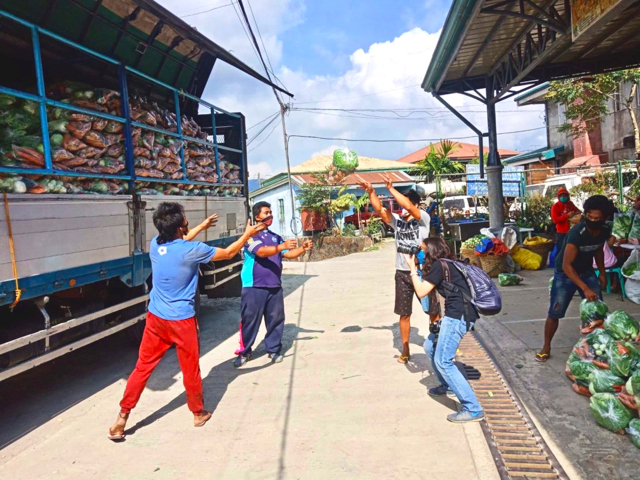 Vegetables purchased from small farmers of Tublai, Benguet, are loaded for delivery to the poor of Metro Manila.

Lettuce, carrots and cabbage freshly harvested in Tublai, Benguet, are fending off hunger among the poor of Manila’s Sta. Ana, Quiapo and Sta. Cruz districts. The vegetables are also mitigating the threat of famine in the capital region, which could happen even at a time of rich farm production in another part of the country, as the new coronavirus disease (COVID-19) pandemic rages.

The supply runs of rice and other vegetables to Metro Manila from Bulacan, Nueva Vizcaya and Camarines Sur make up the other half of the highly visible, marathon online concert series “Bayanihan Musikahan.”

National Artist for Music Ryan Cayabyab initiated the project that gathered about 80 Filipino musical artists in a virtual performance space, for a program now running a month of four to five nightly concerts.

It will go on for another few weeks, encouraged by enthusiastic public response.

The Philippine Business for Social Progress (PBSP) took on the logistics of transporting produce through considerable distance. It originated the win-win scheme to address the pandemic’s challenges to both urban poor and rural farmers. PBSP is also the project partner receiving, accounting for and disbursing donations.

Building on PBSP’s 50-year reputation for integrity and the stature of Cayabyab, the project has raised more than P40 million as of April 9.
Less than three weeks since its launch March 19, the concert series has provided food packs to 16,000 families and 3,000 hot meals to the homeless. PPEs have been provided to hospitals specified by some donors.

Eighty-nine tons of vegetables would have rotted, had they not been transported to the thousands of indigent residents of Parañaque, Malabon, Muntinlupa, Mandaluyong, Caloocan, Quezon City, Makati, Pasay, Las Piñas and Batangas City, aside from Manila. Deliveries included 600 sacks of rice purchased from small farmers.

The PBSP-rented trucks are met by the Samahan ng Nagkakaisang Pamilya ng Pantawid (SNPP), a 70,000-strong urban poor association. SNPP is well known in development circles for remarkable community organizing skills, trained in ultimately freeing their membership from multigenerational poverty traps—and for having whetted its disaster relief acumen against the grindstone of intermittent natural disasters.

The project orchestrated skill sets and zeal that melded into innovative citizen action.

The artists are as enthusiastic as the SNPP food distribution volunteers are resolute. With neither time nor interest in self-congratulation, artists and social workers similarly express joy in using digital technology to quicken connections with audiences.

The Philippines’ beloved musical celebrities in pop, rock, folk and classical genres are taking up unmediated social engagement. The organic look of the livestream shows exhibits a rawness that is often moving. Many of the artists themselves are severely impacted by the pandemic. Their production teams are as hard hit as other cultural workers living without safety nets. As well, the SNPP leadership is one and the same as the urban poor communities it represents. There is a growing realization, however, that collaboration across practices and circumstances promises real possibilities for besting the odds.

The money raised also represents unprecedented collaboration. P10.5 million was given by a consortium of alumni from rival universities, Ateneo de Manila and De La Salle. And on April 8, ABS-CBN Foundation allocated 40,000 food packs worth P20 million, scaling up the novel project against a novel virus.

The distribution involves variety, starting with frozen chicken from San Miguel Corp. A vegetable supplier once included fresh catfish. (The fish had to be cooked and given to the volunteers.) So far, 936 kg of fish and 3,613 kg of dressed chicken have found their way into homes whose breadwinners cannot travel for subsistence work for food.

As music and healthy food become vital experiences during a time of disease and death, citizen action takes up digital technology—to own it, rather than yield freedoms to artificial intelligence.

The links among farmers with no markets, musicians disconnected from audiences, and tens of thousands with no food were crafted via digital tools in the hands of the creative and tech teams of Outbound Asia Inc. Facebook facilitated reach immediately, as well.

Yet amid the frenzied daily levels of digital technology use, it is in human—not virtual—contact that “Bayanihan Musikahan” partners locate the substance of citizens helping citizens.

The project’s most important link has been forged by the more than a hundred guests, temporarily sheltered at the College of St. Benilde and Paco Catholic School, who are repacking supplies into family-sized bundles for distribution. They are among the homeless of the metropolis, collected by Fr. Flavie Villanueva and given food daily by “Bayanihan Musikahan.”

Their role gives both poetry and efficiency to the immense effort. —CONTRIBUTED