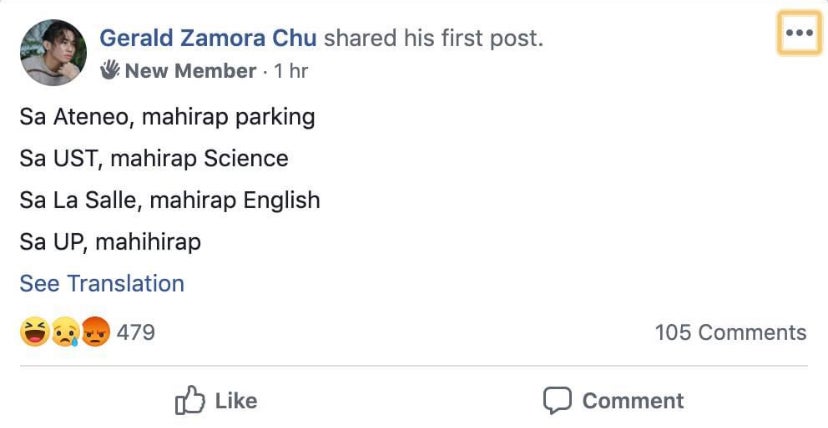 ‘Bawal pikon’: Talking smack about other schools to let off steam

160,000 sign up for Big Four Trashtalkan—FB group of students, alumni of ADMU, DLSU, UP and UST; ‘bawal outsider’

“Papanget niyong lahat.” That’s how Big Four Trashtalkan greets you when you search for it on Facebook.

The private Facebook group, which was born on the second week of the quarantine and now has almost 160,000 members, is composed of students and alumni of the country’s biggest universities (we’ll follow alphabetical order para walang away)—Ateneo de Manila University (ADMU), De La Salle University (DLSU), University of the Philippines (UP) and University of Santo Tomas (UST)—who gather for one reason: to talk smack about one another. It’s one of a number of trash talk groups that have emerged during the lockdown.

The first rule of Big Four Trashtalkan? “Bawal outsider.” If you don’t or didn’t go to any of those four universities, you can’t join. “Maghanap kayo sarili niyong group,” the admin rules read.

The second and, we think, the most important rule is: “Bawal pikon.” If you’re joining the group, check your sensitivity at the door. There are warnings against racist jokes, sexual harassment, homophobic statements, red-tagging, rabid political remarks and extreme insults about the physical appearance of members, but everyone and everything else is fair game.

Join at your own risk

In other words, join the group at your own risk. Because, yes, all the stereotypes about your school and the students who attend it will be used by the other members as ammunition.

The group’s cover photo (a screenshot of one of the posts from the group) is just one example: “Sa Ateneo, mahirap parking. Sa UST, mahirap Science. Sa La Salle, mahirap English. Sa UP, mahihirap.”

No one is safe. Basketball players Thirdy Ravena and Dave Ildefonso joined the fun, too, and were not spared.

The group has gotten criticism for being “immature,” “toxic” and “a waste of time” (mostly by interlopers who enter and leave the group or members who get offended by posts), but who says blowing off steam by talking smack (or getting entertained by watching other people do it) and caring about our country’s situation are mutually exclusive?

It’s clear to see that most members of the group are woke—in fact, when they’re not talking smack, they’re discussing politics, the pandemic and the future of the Philippines.

One trash talker, whose single mother is in the hospital after having an aneurysm, asked the group for help. The group managed to raise close to P700,000. Then the members went back to talking smack again.

That’s the crazy world of Big Four Trashtalkan—but, seriously, is it any crazier than the actual world we’re all living in now?

ToBeYou interviewed the founders of the group who chose to remain anonymous. There are four of them—three from UST and one from Ateneo.

Who are the people who started Big Four Trashtalkan and why did you decide to start the group?

We have decided to keep them confidential due to conflicts with admins from universities. The group was created out of spontaneity and boredom. Similar groups had been created before the Big Four Trashtalkan, like Online Rambulan and UST Trashtalkan.

Since we had a lot of free time, we thought it would be fun to see students from the big four universities do the same. Actually, the group started out as a trashtalkan group between ADMU and UST students, but we decided it would be a lot more fun to include the two other schools.

Are you surprised by the number of people who have joined?

We expected a couple of thousand knowing that trashtalkan groups were a trend. We were quite surprised but also excited to reach 100,000 members in just 24 hours.

As admins of the group, where do you draw the line?

The rules of the group state that members should be careful about what they post. There is a fine line between pure and fun trash talk and destructive attacks like homophobic and racist slurs, and harassment. As admins, it is our responsibility to carefully sift through member-reported content and make sure that the group stays fun for everyone.

How crazy do things get on your side? You get swamped with reports and messages, I’m sure.

Things get really, really crazy and messy when it comes to moderating the group. We get flooded with member-reported content that contains the grimiest type of attacks that people throw upon others. Posts from members who pretend to be a part of the big four schools but actually go to other schools like Enderun, FEU (Far Eastern University) and NU (National Universty) are also reported.

Despite the influx of member-reported content, it is heartwarming to know that even amid all the trash talks, some people take the initiative to report contents that can be offensive or derogatory.

Sorry, but UP holds this crown. They are usually picked on for being so short-tempered and for taking some posts personally. There have already been several members who have posted long statements about the Big Four Trashtalkan group and how toxic it is. As admins, we completely understand what these people are saying.

However, other members of the group usually just poke fun at them by making these posts “memes” or by reiterating the rules of the group which clearly state “BAWAL ANG PIKON.”

How many people have you kicked out/banned so far?

We have banned more than a hundred people already. Most of these people are outsiders, or students from other schools. Other people who have been blocked are those who post gravely offensive remarks, and people who did not follow the rules. This happens every day. As admins, we are doing our best to keep the group fun.

Have you heard from school administrators yet?

We have not heard of any backlash from school administrations. In fact, some professors, like Mark Lao from UST, even take part in keeping the group fun by doing online lectures and games on FB Live. We are hoping that we don’t receive any (backlash) from the different schools in the future.

There have been a lot of political posts, too—how do you feel about that?

We don’t oppose this. Though we are worried about some threats that are sent to the group, we are glad that their trashtalkan energy is now being projected into being politically active.

What do you have to say to people who complain about the trash-talking as being immature and a waste of time?

Well, people are entitled to their own opinions. Some may see the group as toxic and a waste of time, but some people may see it as an avenue of being productive or a place where they can channel their frustrations. Not all of us handle our problems and frustrations the same way. Similarly, not all of us enjoy friendly banter. We should all respect everyone’s opinions. We simply put it this way: Kung ayaw mo, ‘wag. Walang namimilit.

Anything else you want to tell people about Big Four Trashtalkan?

We want people to know that despite all the derogatory remarks posted about these schools, it is still important to be united and to be respectful of each other outside the group. We should all take responsibility for our actions, and learn to apologize when you realize that your actions have gone overboard.