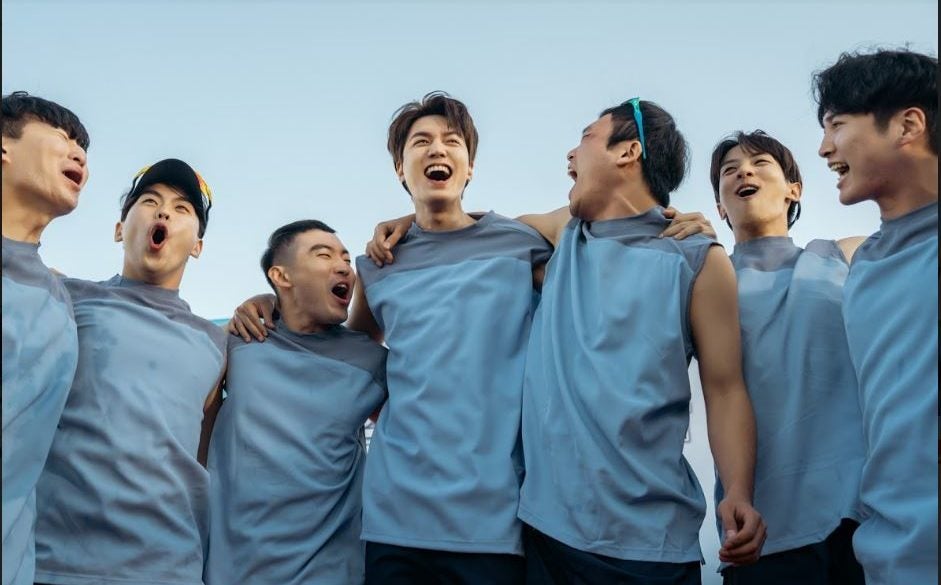 Lee will be rowing, riding horses and fighting with swords in this series.

Lee Min-ho: ‘The King’ of K-drama is here

After over three years, he returns in a new Netflix show

We waited for more than three years for the comeback series of Lee Min-ho and Kim Go-eun. We just did not predict that they would do one together—“The King: Eternal Monarch.”

We practiced physical distancing when we interviewed the two actors and their fellow cast members Woo Do-hwan, Kim Kyung-nam and Jung Eun-chae on April 16. We were at home while they were 1,628 miles away from us, waving hello through our screens. In the video conference, the actors were one table away from each other.

This drama is a reunion for both Lee and Go-eun with scriptwriter Kim Eun-suk. She previously wrote Lee’s “The Heirs/Inheritors” and Go-eun’s “Goblin.” It’s been seven years since Lee worked with Eun-suk.

“I am very happy to say that I think I have matured a little more since then. We were able to communicate on a truer level for which I’m very grateful,” he said. “I am really doing my best to make our second work great.”

Go-eun says that it is an honor to work with the famous writer. She feels that it meant the writer enjoyed working with her in “Goblin,” thus she was very happy to do this series.

The series is about a parallel universe where a gate opens between the world where Lee is the Emperor of Corea and the one where Go-eun is a detective in South Korea. Lee describes his character Lee Gon as someone who carries the weight of responsibility on his shoulders.

“(The responsibility) is beyond what I can even imagine. Although it is a lot smaller, I do have similar experiences. I debuted at a very young age. I am now in my 13th year as an actor. And I think the more my fan base grew, so did the responsibility laid on my shoulders,” he said.

The difference is that being the emperor, Lee is governed by rules and traditions. Lee said that compared to his character, he enjoys the little things in his life.

He thinks the role he plays in this drama is a welcome change. The actor, now 32, said that the roles he played in his 20s were almost always “boyish characters” in coming-of-age stories.

“However, Lee Gon, the role that I play in this project, is a mature adult,” he said. “And he also carries a great burden. That would be the major difference.”

He said that like Lee Gon, he takes his time in making decisions. However, once he makes them, he is the type who goes ahead and pushes forward with them.

“I can also be very witty and a little bit playful and easygoing, so I would say that that’s how I am similar to my character,” he said.

The actor also spoke about his hiatus. He said that the break allowed him to look back on his career. It allowed him to decide on which aspect he wants to do better in.

“Things that I believe I lacked, as well as the values and purposes I want to set for my life as an actor in his 30s,” he said. “I’ve put a lot of thought into how I can be better tomorrow than today and better next year compared to this year.”

He said that this is the second chapter of his life as an actor. “King: Eternal Monarch” is the first page of it, so he really looks forward to it.

Go-eun plays the role of Tae-eul, a young detective who meets emperor Lee Gon in her world. She says that she has never played such a role before and that’s what makes it exciting. But Go-eun is also Luna in Corea. Not much is known about her yet as she would apparently appear later in the series.

“If I were the only character in the story who had to play a dual role, that would have been a lot. But in our story, a lot of the other actors also have to play a dual role. It was not bad, as I actually enjoyed doing that,” she said.

Go-eun had to learn taekwondo because the parents of her character Tae-eul run a gym. She said that her character is very grounded and she comes face-to-face with fantasy. She’d be playing Tae-eul more in the series.

“If I were to look at the similarities between Jung Tae-eul ll and myself, I would like to think that I am also a person who likes to fight for justice. I may not be as active as her in real life, but I do like to play my part in trying to fight for justice,” she said. “The pride that Tae-eul has for her job is the same for me, as well.”

However, she pointed out that she can’t fight as well as Tae-eul. She worked on Luna like she’s a new person she would meet later on. She said that it was challenging to play Luna. She hinted that it was because she is someone most people rarely see in K-dramas.

Woo Do-hwan shares the difficulty of playing dual roles. He said the hardest part was when he had to portray two different characters in one day. He plays the character of Jo Yeong, the imperial guard. He’s also Jo Eun-seob.

“They have two different tones. In terms of their language, Jo Yeong uses very formal language and Eun-seob is actually using a dialect,” he said.Sometimes he catches himself using a dialect for one character and an accent for another.

Kim Kyung-nam is detective Sin-jae. He is the ace detective in the station Tae-eul is in. This makes him work closely with Go-eun. He describes her as an easygoing person and a comfortable partner to work with.

Jung Eun-chae plays Seo-ryeong, the prime minister of Corea. She works closely with Lee in their world. She said that their scenes are always intense.

“But when the shot is over, it becomes a completely different set. Lee Min-ho is a very easygoing and comfortable person to work with,” she said.

“The King: Eternal Monarch” streams every Friday and Saturday on Netflix.