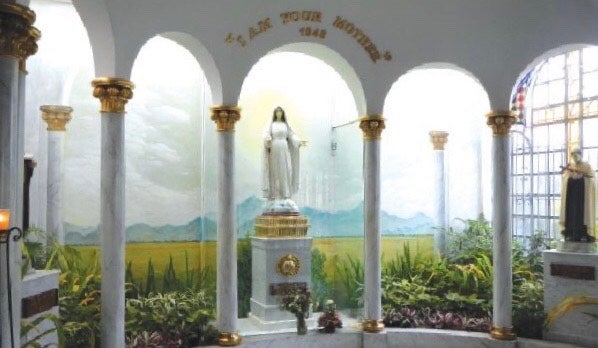 A statue of Mary Mediatrix of All Grace at the Carmelite convent in Lipa City, where Marian apparitions allegedly took place in 1948

The new coronavirus disease (COVID-19) pandemic has revived interest among Filipino Catholics in the disclosure by the late Cebu Archbishop Ricardo Cardinal Vidal that the alleged apparition of the Virgin Mary in Lipa City, Batangas, in 1948 had warned against “China’s dream of invading the whole world.”

Cardinal Vidal, in a 2014 letter to the Catholic Bishops’ of the Conference of the Philippines (CBCP), said one of the “secrets” of the alleged Lipa apparition as revealed to Carmelite nun Teresita Castillo was the invasion of the Philippines and the world.

“Pray hard for China’s dream is to invade the whole world,” Vidal quoted from the notes of Castillo on the alleged apparition at the Carmelite convent in Lipa City in 1948, a year before the Communist triumph in China and Communist leader Mao Tse-tung’s official proclamation of the People’s Republic of China.

“The Philippines is one of its favorites. Money is the evil force that will lead the people of the world to destruction.”

Vidal, the archbishop of Lipa before he became Cebu archbishop in 1982, wrote the letter in 2014 shortly after China took over the Panatag Shoal from the Philippines in 2012 and made several incursions in the West Philippine Sea.

The warning has been made more relevant when the Duterte administration adopted a pro-China policy. It has not protested the Chinese military buildup in the West Philippine Sea. It has also allowed the entry of Chinese overseas gaming operators and illegal workers.

The warning has become relevant because the new coronavirus that has caused the worldwide pandemic is widely alleged to have come from Wuhan, China.

Beijing has come under fire for censoring reports on initial infections and allowing its citizens to travel abroad that might have abetted the spread of the virus especially in Europe and North America. Beijing also has not shared data on coronavirus sufficient enough for the rest of the world to gain information that could help in the development of antibodies or vaccine against COVID-19.

Mediatrix of All Grace

The alleged apparitions in 1948 has been determined by the Vatican as “of no supernatural origin” in a 2016 letter of the Sacred Congregation for the Doctrine of the Faith addressed to then Lipa Archbishop Ramon Arguelles.

But devotion to Mary Mediatrix of Grace, which was the alleged title of the Marian apparition, is not forbidden by the Vatican. In fact the Mediatrix icon is ubiquitous in Batangas province and the Carmel church in Lipa is a popular pilgrimage site.

“It is thus to the Queen of Prophets under her title of Mediatrix of All Grace to whom we will have recourse in order to avert the buildup of tension and to check the territorial ambitions of this Asian superpower,” wrote Vidal.

“It is by following this path of prayer and penance sounded out in Fatima and reiterated at Lipa that our beloved Philippines will be spared the scourge of war and the domination of a communist giant.”

Cardinal Vidal on June 19, 2014, issued a prayer asking for the Virgin Mary’s intercession to protect the Philippines against the “security” threat posed by China.

He called on Catholics to regularly recite the rosary and say the prayer:

“Most Blessed Virgin Mary, amid the crisis brought about by the territorial claims of China, we come to your presence seeking your queenly protection and motherly help. We pray for peace and the safety of the Philippines, as we keep in mind the spiritual welfare of those who advance their territorial claims to the detriment of the security of our country.

“May the love of your Maternal Heart attract the Chinese people to your Son, Jesus. May your Immaculate Heart be the center from which the rays of the light and love for the Sacred Heart will radiate forth throughout China, becoming for them the unquenchable fountain from which the living water of the Divine Mercy will flow. Through your intercession, may the Lord grace the Chinese people with faith, hope and love, that by your maternal mediation of grace, the Father, Son and the Holy Spirit will be worshiped and glorified in that vast expanse of land. (Adapted from a message of Jesus to Sister Lucy of Fatima as documented in a letter of the Seer to the Bishop of Gurza, May 27, 1943)

“Remember O most gracious Virgin that the Philippines is your beloved ‘Pueblo Amante de Maria’ (People in love with Mary) and that we belong to you absolutely, totally, always and forever. We are all yours and all that we have is yours, O most loving Jesus through Mary, Mediatrix of All Grace.”

Cardinal Vidal retired as Cebu archbishop in 2010 and died in 2017.