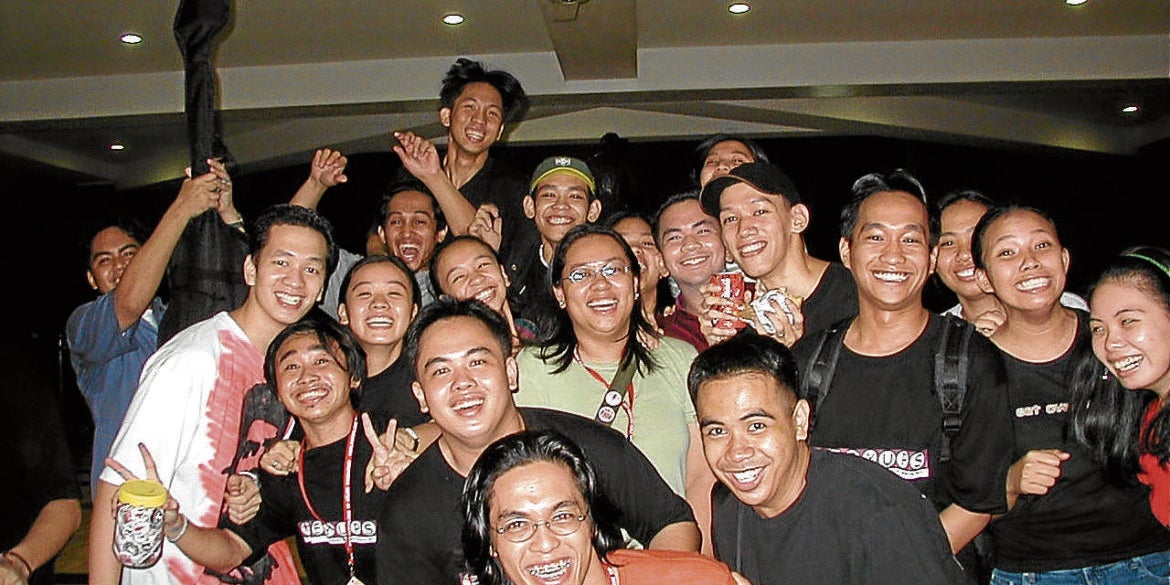 Love story that started Peyups.com revives it as pandemic ‘escape’

Internet forum where members ‘found their tribe’ crashed in 2010. It’s back—and you don’t have to be from UP to join

“Mimi has been a fan of UP Maroons since her UP Integrated School days. When we got together in 1996, I started watching the games live, too,” said De Leon.

In 1998, they built a UP Maroons support site, with Abesamis doing web design and De Leon handling web development. They met UP Maroons fans online and, a year later, Peyups.com was born.

“GMA reporter Joseph Morong was a UP Journalism student; he was our first contributor, writing articles for the site,” said De Leon.

They started from scratch again in 2001, making the forum the focal point. “I stripped it of unnecessary fluff so that it could run on as little server resources as possible,” said De Leon. “We strove to moderate it with volunteer forum moderators, and we tried to foster respectful and intelligent discussions. Topics were eclectic, from light (sharing threads) to useful (best UP profs), intellectual (politics!) and raunchy (sex and intimacy was the most popular forum).”

The Peyups community kept growing and, said De Leon, it was a community they fostered by meeting offline as much possible. Meeting online friends was called an eyeball (or EB) back then, and Peyups had plenty of them.

The 2003 Christmas EB is one of De Leon’s favorite Peyups memories. “I think this was the most attended, with lots of Peyups oldies and newbies.”

There were smaller EBs too—lunch at the Beach House or Mang Jimmy’s, or the group would gather for bowling, billiards, tennis and basketball, road trips.

De Leon looked back on the Peyups concerts fondly. “UP bands that started in the early 2000s are now the solo acts popular in today’s Spotify world, like Ebe Dancel of Sugarfree and Johnoy Danao of Bridge.”

Peyups was more than just a website or a forum—it was where people found their tribe. “I think the internet has made it easy to do that,” he said. “Peyups is a small subset of UP community. A lot of friendships were made in Peyups. Peyups also formed subchat groups like the Pandas, Maroon Maniacs, Peyups Oldies, Peyups Singles.”

The site lived on the support of sponsors from Peyups concerts, online ads and money from the sale of Peyups.com T-shirts.

Love was a big part of Peyups, too, De Leon said. “It was known for love stories and hugot articles. We were witnesses to a lot of Peyups members who got together because of the site, but so far we’ve verified only four Peyups couples who got married.”

De Leon and Abesamis found joy in seeing the community they started grow, but they were also busy living their lives. They started what would become successful careers as wedding photographers. They got married and had two kids, Katy and Kal.

Markku Seguerra, who De Leon and Abesamis met through Peyups in 1999, was helping migrate the new site to a new platform. There were a few attempts, but life got in the way.

Bringing Peyups.com back is something the couple has always wanted to do “if we had the time,” De Leon said. Their kids even call the site Kuya Peyups “kasi nga naman first baby daw namin,” he said.

For the couple, Peyups was never about the money. “During its heyday,” he said, “Peyups was generating barely enough money to keep it self-sustaining. But we felt that Peyups was generating a lot of value to the community, in terms of friendships and shared interactions and as showcase of great writing talent.”

The quarantine has given them a lot of time, so it finally happened. The “seventh or eighth version” of Peyups.com is up, with Seguerra joining the team. “Since I stopped web development when we became photographers, Markku is handling the server side of Peyups,” said De Leon.

After the quarantine, Seguerra said the website would continue as “PC Peyups”—or the post-COVID-19 (new coronavirus disease) Peyups. “Enhanced Peyups!” another member chimed in.

“I think the old Peyups had two distinct parts, the magazine-type front page with the articles and columns, and forum part. For the new Peyups, we’ve added the articles as part of the forum,” said De Leon.

They’ve also added new forum categories, reflecting just how much the members have grown up—Parenting 101, Business and Finance, and Health and Wellness.

They’re welcoming new members. De Leon said, “Try to browse the site and see if it resonates with you. Most members now are respected in their fields, but were starting out in their careers 20 years ago when Peyups started. Interact in Peyups and you’ll find lifelong friends and mentors.”

And no, you don’t have to be from UP to join, said De Leon. “Peyups used to have the tagline the ‘UP Online Community,’ but we eventually changed it to ‘Where Bright Minds Meet’ around 2003. If you dig the discussions, you’re more than welcome.”

The old Peyups members are happy that their old playground is back.

“If you check the discussions now, it feels like it started where it left off in 2010,” said De Leon. “Check the 3-Word Dugtungan thread and the Never Ending Love Stories thread. Those interactions started in the old Peyups.”

That’s what Peyups feels like—a never-ending love story, between Abesamis and De Leon, the couple and their beloved site, the UP Maroons and their fans, Peyups and its loyal members.