10 acts of kindness amid the pandemic | Inquirer Lifestyle ❮ ❯ 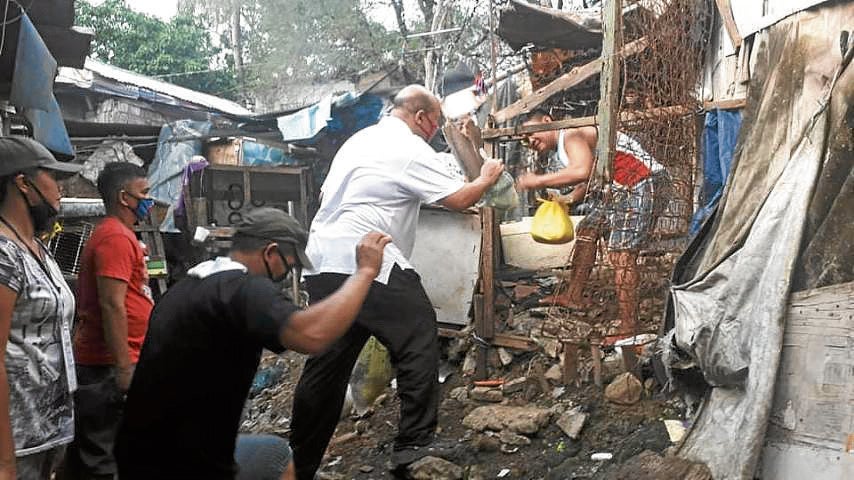 10 acts of kindness amid the pandemic

Simple acts of generosity or thoughtfulness we can do for others

There have been heartwarming stories about health-care workers, volunteers and support service personnel who have answered the call of duty at great personal risk amid the pandemic. Their heroism was infectious, and people who were inspired and moved to action found their mental, emotional, physical and spiritual health enhanced when they shifted focus away from their anxieties.

Their simple acts of generosity or thoughtfulness have been compiled on this list.

1. Send someone a bag of fresh produce.

Responding to the quarantine, a Viber group was created for residents to order vegetables, seafood and meat as a community and have these delivered to their doorsteps. It worked for the majority, but a widow, who was also a senior citizen, had difficulty going online. Her daughter, who lives abroad, asked a neighbor to help.
The next day, the neighbor shared some of her fresh produce and placed an order for the delivery of fresh fish and vegetables for the widow. The widow tried to pay for the deliveries but the payment was refused. The donor said that initially she hesitated giving from their week’s supply and would just order for her neighbor, but not being sure when the deliveries would happen, she decided to share what she had. “I knew after I sent the bag of vegetables that it was the right thing to do.”

Unable to order flowers for a friend’s birthday, a woman decided to paint one despite limited artistic abilities. It wasn’t the most skilled rendition, but painting a peony and sending a photo of it to the birthday celebrator made it personal and special. It was uplifting for the recipient, who was living alone and far from family who was abroad.

The lockdown gave people time to sort out photos collected over the years. One couple had collected hundreds of pictures taken before the digital era. It was overwhelming to go through the pile, but without the pressure of a deadline, it became a pleasurable activity. Not a few of the photos were of people they hadn’t been in touch with for years. They decided to forward the pictures using social media, sending the snapshots via Messenger. Some of those who received the snapshots responded, and were happy to remember happy times together.

This is a true exercise in detachment. When things still spark joy but have remained unused, it was time to place clothes in a box and donate to the victims of the recent fire in Tondo. A few weeks ago, there was an appeal for donations for street denizens housed at the De La Salle University campus to protect them from the coronavirus.
The Department of Social Welfare and Development and the Department of Health upgraded the protocol and requested that new clothes be given to prevent the spread of the new coronavirus disease (COVID-19). (Donors can contact Zak Castil at tel. 0977-8158263, email [email protected]e.ph.)

5. Bring out the special china for the table spread, and include a family in Payatas.

As families gathered around the table together, it was just a good a time as any to bring out plates reserved for special guests. Normally, busy schedules meant dining at different times, but with everyone working from home, one family would break away from their computers and sit together for lunch and dinner. The simple food preparations looked like feasts.

Adding to the dining experience was sharing an equivalent amount to feed families affected by the no work/no pay situation. Fr. Paul Uwemedimo, MGL, sent out an appeal to feed 10,000 families in Payatas. His heroic effort is sustained by donations sent to Puso ng Ama Foundation Inc. (He can be reached at tel. 0905-2477082, email [email protected].)

6. Send a text to check on someone and add a message of care.

It was just a simple “How are you?” to a lady who had spent much of her life looking after other people. She had retired and no longer led an active life. When she got the text from a friend, she expressed profuse appreciation at being remembered. Her response prompted the friend to reach out to other people, most of whom responded warmly and set off a chain reaction that had them messaging distant family and friends from long ago.

Vice President Leni Robredo launched #sulatngpagasa, encouraging Filipinos to write letters and cards to front-liners and COVID-19 patients. The Office of the Vice President prints out the letters and cards and sends them out with the food and care packs and personal protective equipment sets. (The handmade, handwritten cards can be emailed to [email protected].)

A post appeared on Facebook that resurrected a person who had been out of sight and out of mind. Now, years and thousand of miles later, the person’s face popped on the screen. The initial reaction was to scroll down. Yielding to an inner prompt, a private message was sent. It was a simple “hello” with no expectation of a response. Less than a minute later, the screen blinked back a greeting. Whatever the rift had been was no longer important. Life was too short, and it felt good to let it go.

Less than a week after the lockdown, Instagram and Facebook posts were sharing photos of blue skies and clear waterways. There were more birds outside the bedroom window. By the third and fourth week, people were sharing pictures of flowers in the garden. Either they had never really noticed the blooms or the plants were responding to the reduced pollution.

A group of neighbors started a Viber group to share tips on growing herbs and other edible plants in their backyard. Said one man: “The online exchange felt like a recommittment to caring for the environment.”

Khay was in the drugstore when an agitated woman at the counter caught her attention. The customer was trying to buy Enervon-C that had been prescribed for her husband. The pharmacist explained that the stock had run out with the lockdown and he couldn’t say when it would be replenished.
Khay followed the visibly upset woman out of the drugstore and explained that she had overheard her trying to buy the vitamins. Khay took out a box of the pills and offered it to her at no charge. She had an extra one at home. The woman was profuse in her thanks and while Khay couldn’t explain what moved her to put the supplements in her bag that morning, she was glad that she did.

The husband of a woman was rushed to the hospital after he registered an escalating fever in a span of an hour. She was not allowed to accompany him and could only get updates by text messages from the doctors. He had been put in isolation, and during the confinement friends organized a 24-hour vigil so that prayers would be offered throughout the day for as long as he was in the hospital. The wife said, “I didn’t want to stop praying even when I was very tired. Knowing many people were interceding for him, however, gave me so much comfort that I was able to rest.”

One of the people who volunteered for the 2 a.m. slot sent a message. “While I prayed, I imagined the stripes of Jesus. Its imprint left the name of your husband.” A few days later, he was discharged, to the joy of his family and the many people who had prayed for him. She expressed overflowing gratitude for the people who had stayed with them throughout the uncertainty and had prayed continually for his recovery. “God was listening to all our prayers.” —CONTRIBUTED INQ