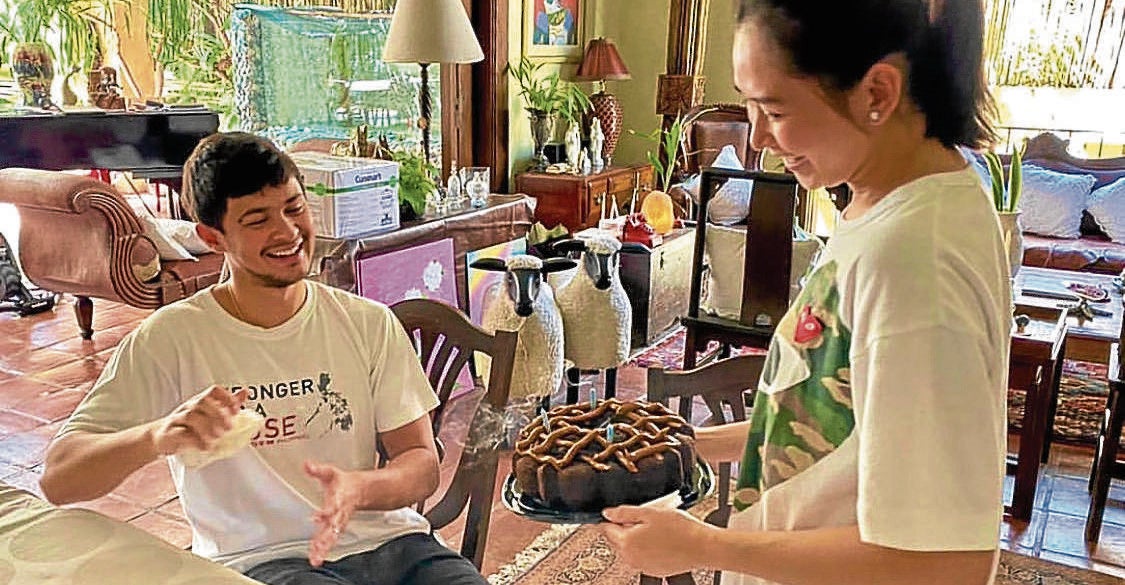 Matteo and Sarah cook—he does pasta, she does Filipino food.

Matteo and Sarah, at home today

In these uncertain days, one of the rare funny moments I had was seeing Matteo Guidicelli jump up from his seat because he thought he felt a rat scurry across his feet. He was on Instagram video for his advocacy, OneVoicePilipinas. Then he asked if others, presumably Sarah, felt it, too. Sarah perhaps could only laugh.

It was quite cute. The social media followers of Matteo and entertainment icon Sarah Geronimo apparently can’t get enough of these newlyweds and their young married life during quarantine. How lucky could a couple in love be, they say, decreed to live with each other in isolation day after day.

When they had family-only wedding rites last March—a secret nuptial that had an outrageously public aftermath (please know your show biz 101)—the couple hardly knew that their much-longed-for privacy would be granted by a pandemic.

Today they live alone, with only the househelp.

“It’s like waking up to a dream every day,” Matteo told us the other day in a phone interview about their married life. “I thank God for putting me beside her.”

Right after they got married, Matteo said, when I texted to ask how they were doing, “Very good. Have an amazing wife who brings magic to my life every day.”

Today, months later, obviously the honeymoon isn’t over. The two enjoy doing house chores together. As Matteo and I talked on the phone, Sarah was busy cooking. What? I asked. Matteo said, “Don’t know yet, Tita.”

Matteo’s house specialties are all sorts of pastas—name it, he can do it, which comes as no surprise, given his Italian lineage. Matteo grew up with his Italian grandparents around in Cebu—he was the apple of his grandfather’s eye; D’ Gianni, the Guidicellis’ restaurant in Alabang, Muntinlupa, is named after him.

After a courtship of more than five years—a dramatic roller-coaster ride that involved dating in utmost secrecy, given the opposition of Sarah’s parents to it—who would have thought that we’d be talking about Sarah’s shrimps with garlic now?

“I can’t ask for anything more,” Matteo said, and suddenly I recalled the stories he shared over dinners with us, Swatch brand builder Virgie Ramos, director-turned-teleserye hit Rowell Santiago, Sandy Tan-Uy, among others—his cheerleaders in wooing Sarah.

Sarah was and is the love of his life. Even as he was starting out in show biz and was gaining popularity as a car racer, he was already a Sarah fan.

He would watch all her concerts, even as far as in Batangas, where he was content seeing her from the bleachers. So when in Sarah’s and Regine’s latest concert last Valentine’s Day, Matteo was seated on the front row, his rah-rah dinner team unanimously exclaimed, “Progress!” The couple were engaged by then, and would be married less than a month later.

The wedding was a special moment symbolized by special rings from Tiffany. It was some way to cap a dramatic relationship that would make K-drama pale in comparison.

“We’re learning to be with each other,” Matteo said of their daily life. They continue to discover new things about each other.

“I see for myself how incredibly meticulous Sarah could be, like in preparing for a show,” Matteo said.

They have busy days. When we talked, Matteo just finished an 80 km bike lap/triathlon morning—all virtual.

Both are busy with their advocacy, the OneVoicePh, done with Landers supermarket chain, which distributes relief goods to disadvantaged communities, from Metro Manila all the way to Cebu. It has raised more than P10 million. (Donate at OneVoicePilipinas.Landers.PH) In the distribution, Matteo puts his military affiliation to good use—he’s an army reservist.

At the start of the lockdown, Matteo also helped deliver mattresses for the front-liners at the Lung Center, which was among the first government institutions to accept new coronavirus disease (COVID-19) cases. He did this through Uratex, his endorsement.

They have no immediate plans to have a baby yet. They just relish discovering new things about each other daily.

And what’s the learning the new hubby can share with other hubbies? “Respect each other,” Matteo said.