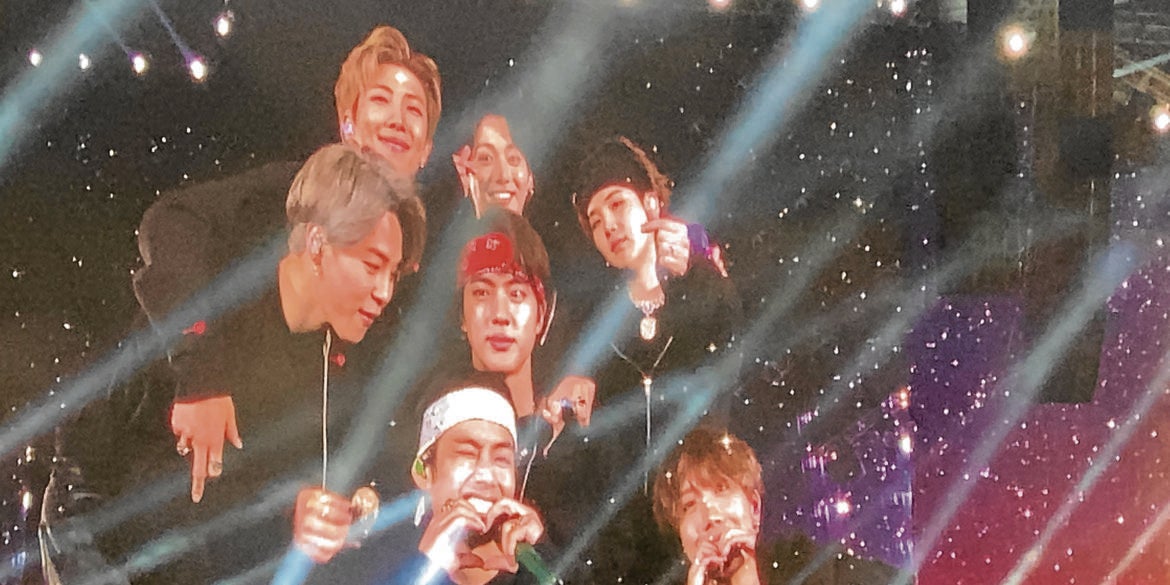 Even with world tour postponed, BTS captivate the Armys

The world’s most famous boy band shows what digital connectivity is, even in pandemic

In a world without the coronavirus, I would have been at the New York City leg of Korean global superstar BTS’ “Map of the Soul: 7” (MOTS:7) world tour.

I would have experienced for the first time a BTS concert soundcheck at Metlife Stadium, perhaps had clear photos and videos of RM, Jin, Suga, j-hope, Jimin, V and Jungkook onstage, and maybe, even a glimpse of manager Sejin.

But I’m home in Manila, wrapping up a long day with Episodes 4 and 5 of the ongoing “Break the Silence,” a docuseries on BTS’ 351-day “Love Yourself” concert stadium tour.

BTS and their agency, Big Hit, have been keeping Armys entertained, reminding us that in these dark and gloomy days, we can seek solace in music and laughter to help us survive.

Since their debut in 2013, the boys have already built a massive archive of music videos, concerts, reality shows, docufilms and livestreams that Armys can always watch and rewatch in a time of limited social interaction and self-isolation.

While fans truly miss seeing BTS onstage, Armys are happy that after years of working so hard, the boys are able to get their much-deserved rest. They don’t waste a moment, though.

After the postponement of the “MOTS:7” tour was announced, BTS promised Armys they’d keep in touch as often as they could. In true Bangtan fashion, the boys have been giving us music, dance, laughter, and bits and pieces of their daily lives.

Here’s a rundown of what BTS has shared with fans the past two months:

BTS concerts and fanmeets, called “musters,” from 2014 to 2019 were streamed for 11 to 12 hours straight on BTS’ official YouTube channel. Veteran fans got to relive glorious moments. For new fans like me, it was a chance to discover the earlier years.

The boys appeared in between the concerts. After greeting Armys, they suddenly did stretching exercises because yes, you need to keep your blood flowing while sitting through the shows for a whole day. It’s trademark Bangtan self-deprecating humor.

Media reports said that the two-day concert garnered 50.6 million views. At its peak, it had 2.2 million simultaneous viewership.

The boys are most active on Twitter and Weverse, the app developed by Big Hit where artists and fans could communicate.

On Twitter, the boys started #BOTD, or BTS of the day to update fans on what they’ve been up to. Often, they upload their selcas (or selfies). One time, Suga (Min Yoon-gi) posted a picture of himself taken by j-hope (Jung Ho-seok), smiling broadly as he held up a container with strawberries. This was how Armys learned the band went to Jin’s (Kim Seok-jin) uncle’s strawberry farm.

In early May, Jungkook (JK, or Jeon Jung-kook, who’s the least active on social media) posted a video of himself singing a cover of American singer Lauv’s “Never Not” and broke the internet again. In less than 24 hours, the clip had more than two million likes and was retweeted 900,000 times. It’s the third time that JK achieved this feat, and he’s the only other person in the world who holds the record. The other one? Barack Obama.

V (Kim Tae-hyung) has been on Weverse a lot the past months, replying to fans’ posts almost every day and sometimes even engaging in conversation. He also joins fans in online games. V’s most recent post were photos of his dog, Yeontan.

Last week, Jin, RM (Kim Nam-joon) and j-hope’s chaotic and funny exchange sent Weverse crashing. Then Jin got locked out of the Weverse. He posted on Twitter: “I think I’ve been expelled from Weverse … If I’ve done something wrong, tell me.” With it was a screenshot of the Weverse page on his phone that said, “With the current account, you cannot enter into another artist’s Weverse.” J-hope replied with a “Kekekeke,” the Korean equivalent of hahaha, and Armys were in stitches!

This is the band’s long-running weekly variety show aired on V-Live and now on Weverse. They had their 100th episode last April 14. “Run BTS” is always chaotic and funny, where these global superstars can be their playful selves. Through the years, they’ve done relay games (on land and water), modified sports (badminton with frying pans or their hands tied together), fought off zombies, went on amusement park rides and to arcades, and tried floristry, coffee-making and cooking.

The boys have been surprising Armys with their V-Lives almost every week.

RM and Jimin (Park Ji-min) made dalgona coffee because they heard it’s the current craze.

V and JK (a rare appearance fans have been waiting for) made carnations for Parent’s Day. Filipino Armys, who’ve been locked up in their homes for weeks, won the day when V saw a comment asking them to say “Mahal kita” and with Jungkook, said the phrase a number of times.

Jin, Suga, and Jimin did Just Dance, the dance rhythm game. They were competitive while having fun.

RM and j-hope decorated their light sticks aka Army Bombs, and Jungkook made a short special appearance with them; J-Hope made beaded bracelets for band members and ate a sandwich; Jimin chatted with Armys and talked about the “dumpling” episode he had with V that had been a mystery to fans, until BTS revealed the story on their “Carpool Karaoke” with James Corden; V chilled with Armys with his latest song recommendations and gave his side of the dumpling story; and Jin had an “Eat Jin” episode after a long while.

Almost seven million watched j-hope make bracelets. During his V-Live, Jimin excused himself for a few minutes and stepped out of the room. Around six million watched an empty chair for some five minutes until Jimin returned.

BTS began using the official YouTube channel for video logs, and when RM first went on it last March, the platform crashed with the sheer number of viewers. RM talked about BTS working on their first ever self-produced album.

Suga also went on YouTube twice, where Armys watched him paint. J-hope showcased a freestyle dance, reminiscent of his “Hope on the Street” series.

BTS have aired a couple of their meetings as they put their album together. It was in one of these vlogs that Jin mentioned the album would be ready in October, sending fans screaming in excitement—virtually, of course.

This is Suga’s weekly “radio show” that’s been on for the past three weeks. It’s on V-Live and he’s had RM, Jin and V as guests. Suga keeps to the traditional radio format where you can’t see the DJ and his guests, but just listening to the audio amplifies Suga’s honey baritone voice.

With his guests, DJ Shup-D shares with Armys what they have been doing and, of course, their music. A favorite topic is BTS’ recent trip to the strawberry farm. RM called Jin the band’s “strawberry captain” and Jin said Jungkook fought with a dog on the way to the farm.

Armys are waiting who among Jungkook, j-hope and Jimin DJ Shup will have as guest this weekend.

For seven days, Big Hit kept fans on pins and needles with the “D- (day)” teaser on Twitter.

On May 16, Big Hit tweeted a blurry “D-7” at exactly 12 midnight, Korean time. Imagine fans from all over the world waiting for the clock to strike 12 in South Korea since then. Day by day, the blurry image became clearer. Fans speculated it must be a teaser for a mixtape. But whose mixtape?

Finally, we got an answer May 22. Suga released his mix tape starting with the single “Daechwita.” Korean Army @choi_bts2 said Daechwita means “literally, ‘great blowing and hitting’… is a genre of Korean traditional music consisting of military music played by wind and percussion instruments, generally performed while marching.”

“Daechwita” is another spitfire song. Its beat and lyrics and the music video set in the Joseon era are all mind-blowing, yet again, BTS make room for some fun. The cameo from Jin and Jungkook, and Jungkook’s cartoon of Big Hit chair Bang Si-hyuk, are not to be missed.

What to look forward to

With “Agust D-2,” BTS once again proved that if you’re part of its fandom, you ought to be ready for their surprises. There’s no dull moment with this super group. That’s why they are global megastars.

BTS are among the big names who will give commencement speeches for YouTube’s virtual graduation ceremony called “Dear Class of 2020” beginning on June 6. The band will also be among the artists who will perform at the virtual grad-night party.

On their seventh anniversary next month, BTS will have an online concert called “Bang Bang Con Live.” We can’t wait for June 14 to watch a Bangtan performance that will surely be as powerful as it is magical. It’s the closest we can get to a real concert for now.