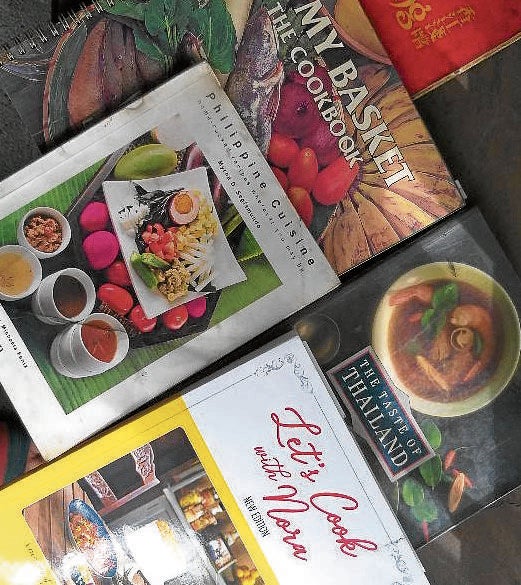 My cook used to come to the house once a week to do the weekly menu. The prepared dishes, which were frozen, would be heated in the microwave oven. It worked with some dishes, like stews which taste better days after, but not with fried anything or even soup.

Because of the lockdown, the cook who lives in Bulacan couldn’t come to our house. And so we are back to cooking daily—me, my son and the cleaning help who can do basic frying and boiling.

Making a daily family menu is difficult, even more than the cooking itself. You’d have to be sure that each meal is balanced, not in terms of health, but in that each dish complements the other. If there is a dry dish, another dish should be soup, or should have a sauce. There can’t be two fried dishes, or two soup dishes. It’s a rule that’s not studied, but based on common sense.

With my family, there has to be fish, meat and vegetables. It has been a rule on my maternal side of the family. My grandmother could never abide by a one-dish meal. Even if she ate alone, when my aunt who stayed with her wasn’t home, my grandmother would have three dishes, different ones for each meal.

My mother had the same rule. But feeding eight children and three househelp meant there were hardly any leftovers.

My friend recalls that I had to prompt her when eating with my family. She had to get whatever dish was in front of her on the lazy Susan, because the food was quickly gone.

The lazy Susan is another feature we have retained, even if there are only four of us. But the rule about getting what’s in front of you right away still applies, because our two big sons eat fast and plenty.

I have many cookbooks, but the ones often used at home for Filipino food are “Let’s Cook with Nora” (Nora Daza), “Kulinarya, A Guidebook to Philippine Cuisine” (Myrna Segismundo) and “In My Basket” (Lydia D. Castillo).

Chinese food is a favorite at home, which is why “A Taste of Hong Kong” (edited by Kenneth Mitchell) is often a reference material.

There are several books on Italian and Spanish cooking. “The Taste of Thailand” (Vatcharin Bhumichitr), plus my notes from my Thai cooking class at The Oriental, help make the menu more varied.

Of immense help are the food mixes that make cooking a cinch. You may like cooking from scratch, but not me. I am delighted with instant sinigang. And the flavored cubes help in making sure the roasted chicken is a delight and easy to do, according to famous chef Marco Pierre White, who endorses a commercial flavoring—to the chagrin of some chefs.

But one should try the barbecue marinade of Mama Sita. My family say it is so good. To me, it’s heaven-sent. No need to measure, just place the cut pork or chicken in a bowl with it, marinate overnight and stoke your fire for the final stage next day.

Clarita Reyes Lapus, through her products, has made it easier for cooks to do their daily chore, especially those who have other things to do. The kare-kare mix will do in a few minutes what my cook used to do from scratch—grind the peanuts and rice grains. There are packets of ground rice and peanuts available in the public market, but you never know when those were made or if the peanuts have molds that are carcinogenic.

But I especially appreciate the ensalada mix, which is the Filipino vinaigrette, a mix of vinegar, salt, pepper and water.

I cooked salpicao from Segismundo’s recipe, and the look of satisfaction on my sons’ faces reminded me of one reader’s reaction to the recipe that we had to ask from the author, who hadn’t published her book yet. The reader tried it and pronounced it as “the bomb.” My generation would have thought they were saying it was awful. But my young coworkers had to educate me that, for their generation, “the bomb” means great, the best, a success.