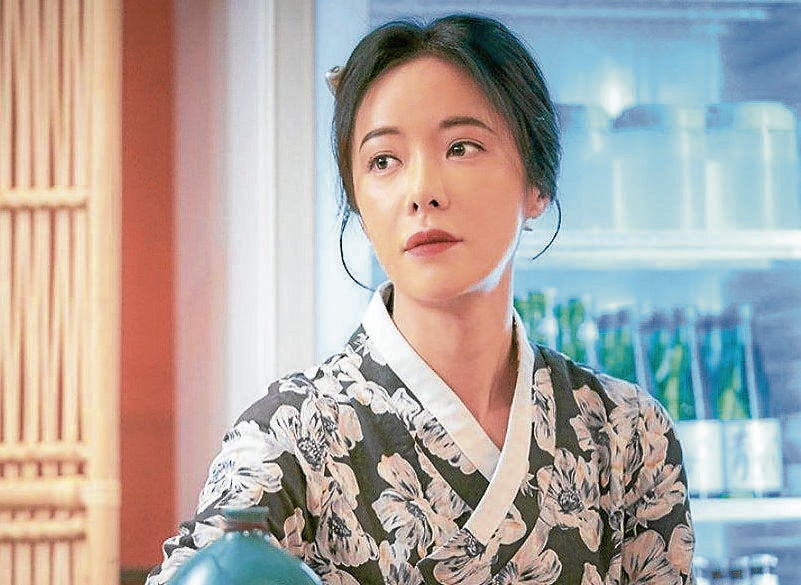 It’s the pocha, (outdoor bar) you shouldn’t be able to randomly walk into, but somehow, Han Kang-bae (Yook Sung-jae) who is human, manages to do it. He was looking for Weol-ju (Hwang Jung-eum) who works in the sometimes invisible tent of Ssanggap Pocha. Also shocked is the supervising chef, Chef Gui (Choi Won-young).

You see, Ssanggap Pocha exists between the living world and the afterlife. Kang-bae winds up as a part timer there—because he can make people confess their deepest worries with a touch—helping Weol-ju, who is stuck there because of her past sins until she manages to help 100,000 resolve their grudges by entering their dreams. When they meet, she’s only 10 souls away from her goal—but she only has a month left, or she will get dragged to hell! Chef Gui has to watch over her.

This is the premise of “Mystic Pop-up Bar,” the latest K-drama from JTBC and Netflix, based on the extremely popular webtoon “Twin Tops Bar” by Bae Hye-soo. It’s funny and romantic, inspiring and dramatic—and a little scary at times. Here’s what you need to know about the cast members:

His time has truly come with “Mystic,” his most prominent lead role yet. Everyone knows that the 25-year-old Sung-jae is the leader of iconic boy band BtoB as a songwriter and vocalist, but also that he’s taken part in various music-related shows such as “Inkigayo.” He has a discography that is a kilometer long. Know too that he’s been seriously bitten by the acting bug, beginning with “Monstar,” followed by “Reply 1994” and then “Who Are You: School 2015,” where he also participated in the Original Soundtrack (makes sense, right?) His most famous appearance to date has been the winning part of spoiled chaebol heir and traditional assistant Yoo Deok-hwa in 2016’s “Guardian: The Lonely and Great God,” also known as “Goblin.” This role really cemented him as a bonafide K-drama presence. He’s displayed an interesting penchant for reality shows, everything from “We Got Married” to “Law of the Jungle.” A staple on “Master in the House,” also known as “All the Butlers,” he left the show earlier this year. In July 2018, he visited the Philippines for his “Paradise 2018” fanmeet. He’s someone you want to root for, after all, he’s overcome a back injury, donates his time to charitable causes and has begun his mandatory military service. Now comes his first chance as a true lead as Kang-bae and we can’t wait.

She should be very familiar. One of the bankable stars of K-drama, the 35-year-old Jung-eum is none other than Kim “Jackson” Hye-jin in the charming 2015 workplace/makeover show “She Was Pretty.” Jung-eum had been a member of the girl group Sugar before turning solo and eventually becoming an actress. After an appearance on the reality show “We Got Married” (notably with her then-real-life boyfriend) and a role on the daily “High Kick Through the Roof,” she began acting regularly and appearing in advertisements. She has then played the lead in everything from 2011’s “Listen to My Heart” to 2018’s “The Undateables.” She’s actually appeared with Park Seo-jun twice, first in “Kill Me, Heal Me” and then in “She Was Pretty.”

All you need to know about Won-young is that “Mystic” is already his 32nd K-drama, so he is that rakishly handsome guy whose face is suddenly super familiar. The 44-year-old has been in literally everything from “The Heirs/The Inheritors” to “Diary of a Nightwatchman.” He had really memorable turns as Tae-pyung in “The Gentlemen of the Wolgyesu Tailor Shop,” Ahn Ji in “Hwarang: The Poet Warrior Youth,” a cute cameo in “While You Were Sleeping,” and Hawng Chi-young in “Sky Castle.” Yes, he doesn’t play around and his role as Chef Gui signifies he’s already moved up to the more senior roles as the chef who has to watch over Weol-joo, and now, Kang-bae as well.

The supporting cast is full of experienced comedic actors in Lee Jun-heyok who plays another chef as well as Kim Yong-gun (so many), Kim Mi-kyung (“Hi Bye, Mama!”) and Yeom Hye-ran (“Goblin”). Jung Da-un and Park Ha-na bring the youth.

“Mystic Pop-up Bar” is streaming on Netflix with new episodes every Wednesday and Thursday.