Where did the Holy Spirit descend on the Apostles? | Inquirer Lifestyle ❮ ❯ 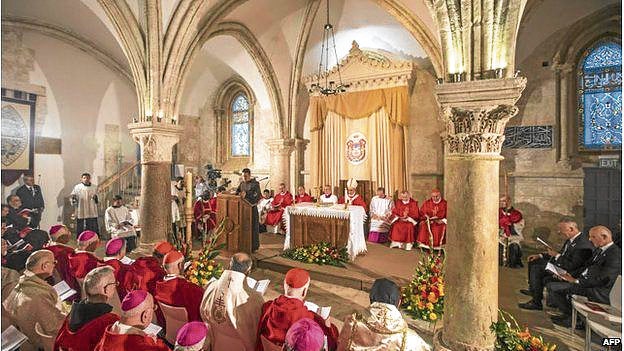 Pope Francis celebrates Mass at the Upper Room and Cenacle in Jerusalem on May 26, 2014. INQUIRER PHOTO

Where did the Holy Spirit descend on the Apostles?

Closed since the new coronavirus disease (COVID-19) pandemic lockdown on March 5, the Church of the Holy Sepulcher in Jerusalem reopened to pilgrims last May 24, and the Basilica of the Nativity in Bethlehem reopened two days later. Other Christian sites are expected to reopen in the following weeks, including what the Franciscan Custody of the Holy Land has called as “the most important room in Christendom.”

Said to have been the site where the Apostles and the Blessed Mother received the Holy Spirit during Pentecost, the Upper Room is located on the upper floor of a two-story building south of the Zion Gate in the walls of the Old City of Jerusalem.

The Upper Room is also known as the Cenacle, since it is also believed to be where the Last Supper took place (“cenacle” means “dining room”).

By tradition, too, it is the same room where Jesus appeared to the Apostles after the Resurrection, and where He showed later His wounds to the incredulous St. Thomas the Apostle.

As the Cenacle, the site is where the Sacrament of the Holy Eucharist was instituted. As the Upper Room where the Holy Spirit came as tongues of fire on the Apostles, it is the birth-place of the Church.

But the site is the subject of political controversy since it also considered significant by the Muslims and Jews. Muslims consider it a mosque; in fact above it is a minaret. But the Israelis consider it a Jewish shrine since below it is a structure they considered to be the Tomb of David. Since 1948 upon the creation of the State of Israel the structure has been in the control of Israel.

That the site is a bone of contention between geopolitical and religious players should show the multistoried value of the place.

The Franciscans got into possession of the Cenacle in the 14th century, restoring the building and providing its Gothic vaults, which have remained visible to visitors today. But in 1522 the Ottoman Turks captured Jerusalem and evicted the friars and transformed the Cenacle into a mosque. Christians were banned from the site until 1948 when the new State of Israel allowed Christian pilgrims back.

It is with Israel’s permission that Pope Francis held a Mass at the Upper Room on May 26, 2014 during his apostolic visit of the Holy Land.

If there were lingering doubts on the historical truthfulness of the site as the Upper Room and the Cenacle, Pope Francis seemed to have banished them.

“Dear Brothers, It is a great gift that the Lord has given us by bringing us together here in the Upper Room for the celebration of the Eucharist,” he said in his homily.

“Here, where Jesus shared the Last Supper with the apostles; where, after his resurrection, he appeared in their midst; where the Holy Spirit descended with power upon Mary and the disciples. Here the Church was born, and was born to go forth. “

Fr. Jerome Murphy O’ Connor, O.P., and other biblical archeological scholars refer to the “literary tradition” that situates the house of the Upper Room on Mount Zion, the southwestern hill of Old Jerusalem which at the time of Jesus would have been inside the city walls.

Nowadays, of course, Mt Zion is outside the walls because that part of the city was destroyed during the Jewish War. It remained uninhabited until the Byzantine era when new constructions started in the 4th century.

Recent excavations have discovered the remains of a synagogue-like structure containing graffiti similar to those by Jewish Christians in the first centuries of Christianity. The stone floor of the remains is said to be from the late Roman period and the walls are said to be reused from old Herodian structures.

Fr. Murphy O’Connor said that since the Romans had destroyed Jerusalem and renamed it Aelia Capitolina, there must have been on Mount Zion a Jewish Christian place of worship known as “the little house of God.”

The Dominican biblical archeologist said that the fact that it was dangerous to reach that area during the Roman era, the first Christians must have really ascribed significance to it.

“If, despite all obstacles, they maintained contact with a site there, it must have been of extreme importance to them,” he wrote in “Keys to Jerusalem” (Oxford University Press; 2012). “This means that veneration of the site must be pushed back into the first century and prior to the fall of Jerusalem.”

The Tomb of David in Old Jerusalem is baffling considering the Old Testament, says David, was buried in the City of David (1 Kings 2:10), which, according to Fr. Murphy O’Connor, “is identified with the city of the Jebusites on the Ophel Ridge (2 Samuel 6:5-9).” In fact early 20th century excavations in Ophel revealed royal tombs, “which have not been controverted,” the late biblical scholar from the prestigious Ecole Biblique et Archeologique in Jerusalem wrote.

Fr. Murphy O’Connor cited fourth- and fifth-century lectionaries (divine office readings) showing that there was a memorial service for David and James, “the brother” or cousin of Jesus.King David and the Apostle James the Less are considered founders of the old and new Jerusalem, respectively. Saint James was considered the founder of the new Jerusalem because he was its first bishop.

“The liturgical memorial eventually gave rise to physical memorials, namely tombs, that of James in the Armenian cathedral and David in the Cenacle,” wrote Fr. Murphy O’Connor.

Christians are allowed to visit the Tomb of David. There are separate pathways for males and females. Males even if they’re not Jews must wear the kippah or yarmulke (Jewish brimless cap) when viewing the tomb.

Most archeologists and historians agree that the Upper Room was built during the Crusades in the Middle Ages. “Its features are so specifically Lusignan Gothic that it can only have been constructed by craftsmen from Cyprus recruited by the Franciscans when they returned as guardians of the Holy Land in 1331,” Fr. Murphy O’Connor wrote. The structures around the Upper Room are, in fact, remnants of the Franciscan medieval friary.

Among the Crusade-era gothic architectural detail would be the slender marble column supporting a stone canopy in the southwest corner. Carved into the capital at the top of the column are pelicans feeding on the blood drawn by their mother from her breast, symbolizing Christ giving up His blood to redeem humanity.

The Cenacle and Upper Room was the first Holy Land site to be obtained by the Franciscans. In 1342 Pope Clement VI through the papal bulls “Gratiam Agimus” and “Nuper Charissimae” named the sons of Saint Francis of Assisi official custodians of Christian sites in the Holy Land. Over the centuries, the Franciscans in the Holy Land were persecuted and evicted from their buildings there. Many of the friars were martyred, endorsing with their blood the truth that the Upper Room and Cenacle was indeed the birthplace of Christianity.

As Fr. Murphy O’Connor wrote, “Through good times and bad the little church of God was cherished as the first assembly place of the church in Jerusalem.” INQ