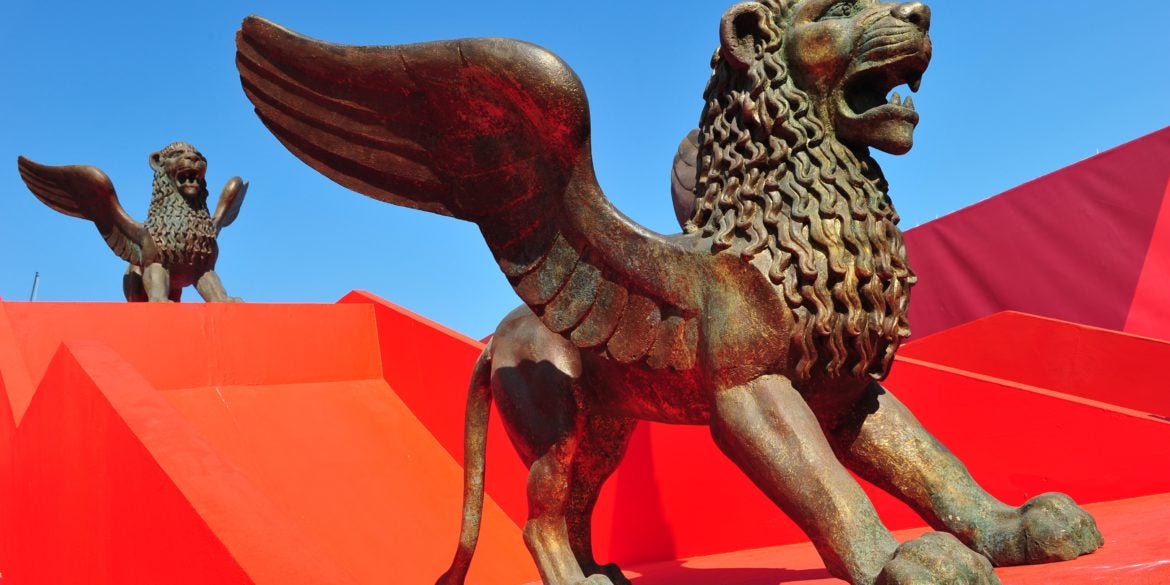 (FILES) In this file photo taken on August 30, 2011 statues of golden lions are displayed near the festival's palace on the eve of the opening of the 68th Venice International Film Festival at Venice Lido. - The decision to hold the 2020 Venice Film Festival despite the coronavirus pandemic is being hailed a "sign of hope" for the movie world after months of closed cinemas, shuttered film sets and cancelled galas. (Photo by Alberto PIZZOLI / AFP)

Venice film fest a ‘sign of hope’ for world cinema

The decision to hold the Venice Film Festival despite the coronavirus pandemic is being hailed as a “sign of hope” for the movie world after months of closed cinemas, shuttered film sets and cancelled galas.

The rapid global spread of the virus forced major production companies to halt filming, and top silver-screen festivals to postpone or cancel their 2020 editions — including Venice’s historic rival Cannes, usually held in May.

Despite Italy being among the worst-hit countries, with over 33,000 deaths, the director of the Venice Film Festival, Alberto Barbera, is defiant in the face of the disease, insisting the 77th edition of the “Mostra” will go ahead from September 2 to 12.

Italy has been slowly exiting its lockdown and organisers in the canal city are betting on a return to normality in the hard-hit north of the country by the end of the summer.

The first post-coronavirus festival will nonetheless have to adopt new sanitary and social distancing rules.

“It will be a unique edition. We still don’t know exactly what we’ll be able to do, but in the meantime are selecting the films and drawing up a plan to allow everyone to participate safely,” Barbera said on Instagram this week.

Giorgio Gosetti, head of the renowned parallel Venice Days competition for innovative or original filmmaking, told AFP it was “as if we were starting over again from 1932, when the festival was founded”.

“Everyone in the world of cinema… feels that right now the best place to celebrate, to show vitality, is the oldest festival in the world,” he said.

Barbera has repeatedly ruled out the suggestion the prestigious event could be held online, leaving film experts to suggest the number of films shown — generally over 200 — will be noticeably reduced.

Familiar scenes of throngs of paparazzi snapping photographs of A-listers on the red carpet and signing autographs for screaming crowds of fans are also unlikely.

Festival expert Angela Prudenzi told AFP that this year, “all eyes will be on the films, which is a very good thing”.

What remains unclear is how the cancelled Cannes festival could work with Venice’s festival — or step on its toes.

Thierry Fremaux, the Cannes festival’s director, has said he and Barbera have discussed the possibility of some type of collaboration, without providing details.

One complication for Venice, which has not yet released its roster of films, is that Cannes is set to unveil its own selection on Wednesday. The 50 to 60 films on the list will not be shown on the Croisette, but will benefit from the “Cannes 2020” label created after the cancellation of the 73rd edition.

Whether some of those films show at Venice instead, or bypass the Mostra entirely to premiere at other festivals such as Toronto or San Sebastian, remains unclear.

The Hollywood Reporter reported that Italian director Nanni Moretti’s latest film, “Tre piani,” based on Israeli Eshkol Nevo’s novel Three Floors Up, was set for Cannes, but will go to Venice instead.

Big US films that had been expected to premiere at Cannes — including Wes Anderson’s “The French Dispatch” and Pixar’s animated feature “Soul” — have pushed back their releases to later this year.

Traditionally held on the Lido, Venice’s festival could include new spaces for film viewing this year.

Some have suggested that the Arsenal shipyards, where the city’s famed art and architecture bienniales are held, could be turned into cinemas, with only a limited, pre-booked number of viewers allowed inside.

Whether the film world’s great and good will be seen this year nipping across the lagoon in speedboats or sipping prosecco at the festival’s parties remains to be seen.

But Giona Nazzaro, a programmer who has helped revitalise Film Critics’ Week, a Venice sidebar show, told the Manifesto newspaper that the festival going ahead provided a much-needed glimmer of light in dark times.

“That an industry suffering like the film industry is starting up again is a sign of hope,” he said.

Cover image: In this file photo taken on August 30, 2011 statues of golden lions are displayed near the festival’s palace on the eve of the opening of the 68th Venice International Film Festival at Venice Lido. (Photo by Alberto PIZZOLI / AFP)